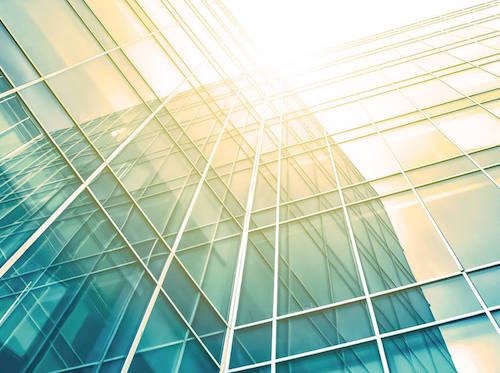 Recognizing opportunity in the ubiquity of large, glass-walled buildings, and of windows in general, researchers and start-ups are working to create a solar window that is as efficient as it is transparent.

A team from the University of Michigan is working to bring to life the “tantalizing idea” that “vertical surfaces on the outside of just about any building could unobtrusively generate electricity,” writes Inside Climate News.

In their latest work on solar windows, published last month in the journal Joule, the Michigan researchers say it’s possible to use “dye-like compounds” rather than silicon to turn solar energy into electricity.

Applied to the window in a semi-transparent peel-off layer, the compounds are “connected to lines of metal so small they are invisible to the eye,” Inside Climate writes.

In a significant advance, the team designed a process that is factory-ready, moving beyond earlier efforts where such processes only worked in a lab environment.

“You see a lot of these glass and steel buildings around which are just walls of windows,” said study co-author Stephen Forrest, an electrical engineering professor at Michigan. “Why not turn that excess energy (from sunlight) into electricity to help power the home or the building?”

Forrest and his team say they’ve shown how to create windows that are both large, “up to two metres by two metres,” and efficient. Their window converts 7% of the solar energy to electricity. “This is less than the 10% the team views as easily within reach with the technology, and also less than the 15% that is a starting point for most new silicon-based systems,” Inside Climate writes.

But the efficiency lag is hardly a deal-breaker, as solar windows are typically seen as a supplement to solar panels, not a replacement.

“Like most emerging clean energy technologies, much of the work on solar windows is to increase efficiency and reduce costs to the point that the product makes sense to a prospective buyer.”

Citing a 2020 study by Forrest and his colleagues, Inside Climate writes that “a solar window can be built and installed for about double the cost of a conventional window, and the income from generating electricity would pay for the difference in cost in two to six years, depending on factors like the level of sun exposure.”

PVBuzz Media writes that the Michigan team’s solar peel is 50% transparent, with a greenish tint, and is “suitable for use in commercial windows.” It adds that “higher transparencies that are likely preferred for the residential market are easily achieved by this same technology.”

The University of Michigan is currently seeking to patent its solar window and looking for industry partners to produce and sell them.

Another player in the sector is Ubiquitous Energy in California, which claims to be developing a fully transparent solar window capable of offsetting 30% of building electricity, according to its website.

These and other pioneers in solar windows will have no trouble finding the glass upon which to layer their solar radiation-grabbing dyes. In August, 2021, a post on the Prepared blog estimated there are five to seven billion square metres of windows in the United States alone, with another 2.5 billion square metres of glass installed around the world each year.