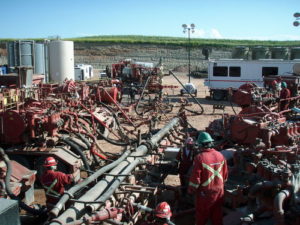 Rural Pennsylvania is facing a continuing onslaught of new natural gas and petrochemical facilities on farmland, despite health and environmental threats that trouble locals.

“Residents living near these facilities, like so many in communities throughout western Pennsylvania, remain concerned that state and local officials are not considering the cumulative public health and environmental impacts from the massive petrochemical buildout driven by shale gas development,” reports Oil and Gas Watch.

Smith Township serves as a potent example of the changes that natural gas producers have brought to the region since the late 2000s, when they first started using generations-old farmland for shale gas development. In February, 2016, when companies MarkWest Harmon Creek and ETC Northeast Pipeline LLC Revolution, a subsidiary of Texas-based Energy Transfer Partners, proposed two plants in the area to use extreme cold to separate gas into methane, ethane, propane, and other fuels. Residents opposed the plans, with protesters citing incomplete permissions from regulatory authorities, including an incomplete air permit from the state Department of Environmental Protection. But local leaders ultimately approved the plants, responding that the companies had “met their obligations.”

“They’ve come before us twice before and we had our reservations, but they’ve done all they’ve needed to do for us to let them continue forward,” Township Chair Thomas Schilinski said at the time.

The two plants were constructed around a hayfield owned by the Duran family, who had joined the protests. The family has since faced nearby pipeline expansions and smoke from flaring at the facilities.

“These plants and their pollution have forever changed our lives,” Kasey Duran told Oil and Gas Watch. “We worry for our health, especially for our children.”

All told, Oil and Gas Watch says, “Pennsylvania has issued Clean Air Act permits for at least 29 large gas and petrochemical infrastructure projects like this since 2012.” Fifteen of them, with potential annual emissions of up to 1.7 million tonnes of greenhouse gases, are already operating.

In nearby Beaver County, a pipeline owned by ETC Revolution exploded in September 2018 following a landslide. The explosion destroyed a home, vehicles, garages, and brought down six high-tensile electric towers in the neighbourhood.

“It lit this whole valley up,” local police chief Barry Kramer told the Pittsburgh Post-Gazette. “People looked out their window and thought the sun was up.”

The pipeline was back in service by August, 2021, though residents soon started filing pollution complaints against the companies. Officials have taken action to address the complaints, but the flaring continues.

In August, 2022, ETC Revolution pleaded “no-contest” to criminal charges related to the pipeline explosion. In February, a grand jury concluded that the company “repeatedly ignored environmental protocols,” failures that contributed to the landslide that caused the rupture and explosion. ETC Revolution will pay US$1 million in the settlement, and is now looking to expand its facilities—a prospect that has residents on edge, Oil and Gas Watch says.

“Families like the Durans continue to ask, ‘Who determines when there is too much industry near us? When is enough, enough?’ These questions echo across western Pennsylvania, where the shale gas boom has transformed once-quiet agricultural communities.”