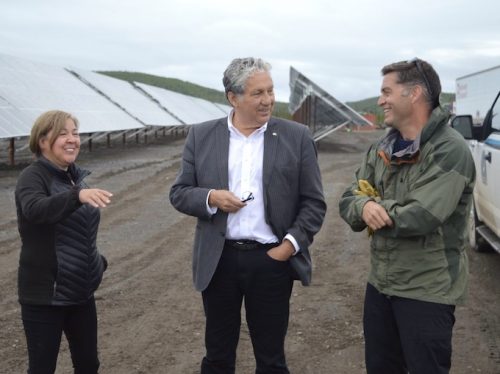 A Gwich’in-owned company in Inuvik, Northwest Territories, is building a one-megawatt solar farm that will reduce the community’s greenhouse gas emissions by 824 tonnes per year, cut annual energy costs by $1 million, and improve air quality by replacing local diesel generation.

“This project is about energy security and diversifying the energy in Inuvik,” said Nihtat Energy President Grant Sullivan, said in a release last week. “This is just adding a bunch of energy security to the community.”

“Inuvik currently consumes the most diesel for heat and power in the Northwest Territories,” Crown-Indigenous Relations and Northern Affairs Canada said in a release. “This project builds on the success of several other solar initiatives in Inuvik developed by Nihtat Energy Ltd., including those providing power to the Northmart Solar Residential Program, Mackenzie Hotel, and Inuvik Satellite Station Facility—all of which are contributing to reducing Inuvik’s reliance on diesel.”

Nihtat plans to complete the 3,456-panel project, located on a former industrial site outside town, by the end of the year. It’s expected to start delivering electricity to the NWT grid in the spring, CBC reports. It will create six local construction jobs and four part-time operations positions and “facilitate training and capacity-building opportunities for local Indigenous-owned businesses,” the national broadcaster says.

On its website, Nihtat Energy describes itself as “a northern, Indigenous-owned and -operated company focused on developing and operating clean energy alternatives and energy efficiency projects in the Beaufort Delta region of Northwest Territories as well as other areas of northern Canada.” It’s a subsidiary of Inuvik-based Nihtat Corporation, which is in turn wholly owned by the Nihtat Gwich’in Council.