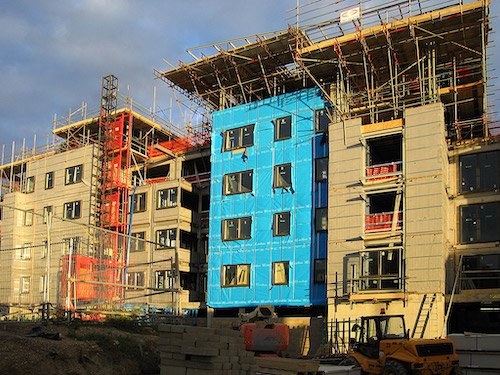 As the Toronto Community Housing Corporation embarks on an ambitious retrofit that will benefit its tenants and the climate, residents sweltering in a privately-owned low-income building across town are battling a landlord threatening eviction if they turn on the air-conditioning.

Over two dozen low-income Torontonians continue to fight with their private developer landlord who insists that if they want to use AC, they need to pay for it—even as public health experts urge policy-makers to do more so that low-income households are not left fending for themselves in a major heat wave, reports Toronto City News.

One place to start, says City News, is Ontario’s Residential Tenancies Act, which requires landlords to maintain a minimum temperature of 20°C in their buildings through the winter, but places no cap on how hot rental buildings can get in summer.

Temperatures inside the low-income building at 130 Jameson were well above 31°C ten days ago, just three degrees below outdoor temperatures, and dropped only 4 degrees for tenants who—after weighing the health risks against their landlord’s wrath—flipped the switch on their AC units.

That level of heat presents a profound health risk, especially for children and those with underlying health conditions like diabetes, asthma, and heart disease. Being left to endure searing summers amounts to a “perfect storm” for the poor and poorly housed, said Dr. Andrew Boozary, executive director of health and social policy at the University Health Network.

Citing air conditioning as a “basic right” that tenants must therefore be able to afford, Boozary stressed that “we need to be addressing the income and living wage issue.”

But latest news is that city councillors aren’t feeling the urgency. City News writes that during a review of Toronto’s heat relief strategy at City Hall last month, one recommendation was “a possible subsidy program for AC units or fans for low-income tenants”. In the end, council decided the initiative “would only be considered as part of future changes.”

Meanwhile, thanks to a retrofit by the Toronto Community Housing Corporation (TCHC) and The Atmospheric Fund (TAF), the 40 families who live at 840 Eglinton Avenue West will not have to wait to live in much greater health and comfort—and more cheaply than they do now—in their 80-year-old building.

Projected savings on the “deep, multi-measure retrofit” of the complex will “include a 70% reduction in energy use and an 85% reduction in carbon intensity,” TAF writes in a recent release.

The project will include upgrades to the building envelope and a fuel switch away from gas boilers to high-efficiency electric heat pumps.

“The redesign is expected to garner at least $52,000 in annual utility savings, and 196 job years of local employment, establishing a model for other deep retrofits of similar buildings in TCHC’s portfolio and beyond that can be easily replicated,” TAF says. And “some of the contract employment will likely be undertaken by TCHC tenants via Building Up, which trains and employs people facing barriers to employment.”

The $6.8-million retrofit will produce “quite a transformation,” TCHC’s director of smart buildings, Boyd Dyer, told the Toronto Star, while helping tenants stay on as their building grows increasingly livable and affordable. At the end of the process, the Star says, “everyone will have air conditioning.”

The retrofit is meant to be the beginning of something much bigger: a blueprint for greening more than 2,100 buildings and almost 59,000 units.