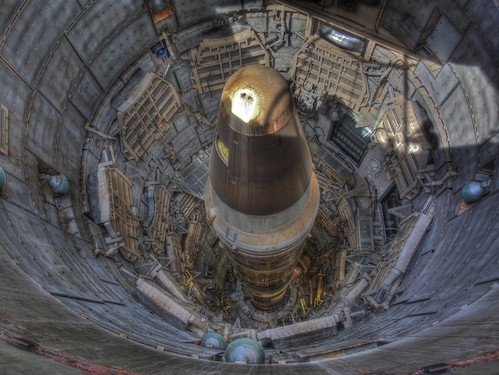 A new study is bringing new focus to the other form of human-induced climate change that could destroy civilization and all but extinguish the human race: even a “limited” thermonuclear war would darken the skies, blot out the sunlight, and dramatically reduce harvests for four or five years.

In a paper released today, a team led by Rutgers University scientists conclude that a small-scale nuclear exchange between just two countries with modest arsenals—the researchers cite India and Pakistan, both armed with nuclear weapons—could incinerate cities on a scale that would force five million tons of soot into the stratosphere. That would enough to filter solar radiation and lower planetary temperatures, reducing the global harvest of calories in the form of wheat, maize, rice, soybean, and other crops by an estimated 7%. That could lead to the deaths by starvation of hundreds of millions within two years, and ultimately a death toll of two billion.

At the more extreme end of the scale, an exchange of intercontinental ballistic missiles between the United States and its North Atlantic Treaty Organization allies on the one hand, and Russia on the other, could push famine-related deaths to five billion.

“The data tell us one thing. We must prevent a nuclear war from ever happening,” said Rutgers climate scientist and study co-author Alan Robock.

Research of this kind offers a vivid, even lurid way of more closely examining the intricate links between human behaviour and the global climate machinery, and researchers at Rutgers have been treating the hazard of nuclear war as an academic exercise in climate understanding for the last three years. The same team even used the dreadful 2017 forest fires of British Columbia—from which soot and ash soared 23 kilometres into the upper stratosphere and stayed for eight months—to test their simulations in  real life.

But Russia’s brutal invasion of Ukraine, and the ensuing U.S. and European support for the Ukrainians, have intensified the possibility of what might be a once and final demonstration of the hypothesis that all-out nuclear war could result in defeat for the whole human race. The latest study, in the journal Nature Food, models the consequences of six possible war scenarios—the firestorms, the fallout, the failed food harvests—in more detail.

The high-flying soot hazard is well-established: in 1815, a colossal eruption in Indonesia darkened the global skies, triggered the notorious “year without a summer” of 1816, and fuelled political instability. Scientists floated the idea of a devastating “nuclear winter” as long ago as 1983.

In their latest study, the Rutgers researchers started with the idea of a limited nuclear war, in which two armed nations detonated 100 weapons with yields of 15 kilotons over urban settlements. That’s a tiny fraction of the world’s nuclear arsenal, but it would be enough to put five million tons of soot into the upper stratosphere.

An estimated 27 million would be killed in the fighting. Then the researchers looked at the likely impacts on crops, livestock, and fish catches, calculating that by the end of the second year, global yield would have fallen by 7%, leaving vastly more people without enough food to stay alive.

At worst, the researchers contemplated a much-wider episode in which more than 4,000 weapons, each with a 100-kiloton yield, directly killed 360 million, put 150 million tonnes of ash into the upper atmosphere, dropped the planetary average temperature by more than 14°C, precipitated another ice age, and condemned five billion to starvation. Most nations under this scenario, they write, “would have calorie intake lower than resting energy expenditure.” This would be three-fourths of the human race.

“If nuclear weapons exist, they can be used, and the world has come close to nuclear war several times,” Robock said.

“Banning nuclear weapons is the only long-term solution. The five-year-old UN Treaty on the Prohibition of Nuclear Weapons has been ratified by 66 nations, but none of the nine nuclear states. Our work makes clear that it is time for those nine states to listen to science and the rest of the world and sign this treaty.”