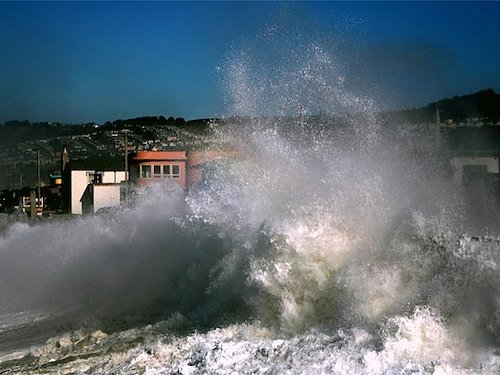 Ferocious winds. Weeks of drenching rain and snow. Communities “ravaged beyond resettling” and irrigation dams at risk. Californians have always thought of earthquakes or, lately, wildfires when talk turns to the Big One. But new research points to the devastating impacts the state would face from a future superstorm driven by global warming.

According to that research, the storm “will very likely take shape one winter in the Pacific, near Hawaii,” the New York Times reports. “No one knows exactly when, but from the vast expanse of tropical air around the Equator, atmospheric currents will pluck out a long tendril of water vapour and funnel it toward the West Coast.”

Once those atmospheric processes get started, “this vapour plume will be enormous, hundreds of miles wide and more than 1,200 miles long, and seething with ferocious winds,” the Times reports, in an exquisitely illustrated multimedia feature. “It will be carrying so much water that if you converted it all to liquid, its flow would be about 26 times what the Mississippi River discharges into the Gulf of Mexico at any given moment.”

When that “torpedo of moisture” hits the U.S. state that styles itself the world’s fifth-biggest economy, “it will crash into the mountains and be forced upward. This will cool its payload of vapour and kick off weeks and waves of rain and snow.”

While the U.S. Pacific Coast has been sustaining “havoc and ruin” from superstorms for decades, the Times adds, “this one would be worse than any in living memory.”

Already, climate change driven principally by fossil fuel burning has increased the likelihood of a month-long, statewide megastorm to one in 50 in a given year, according to computer modelling released Friday. Another 1.0°C of average global warming would increase the likelihood to one in 30. And when the storm hits, “none of the state’s major industries, from tech and Hollywood to farming and oil, will be untouched,” the Times says.

The Times has details on the extent of the risk and how California is responding.