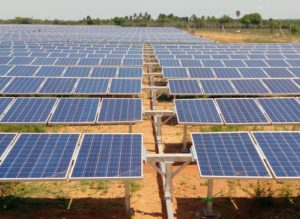 New solar installations around the world are poised to grow by a “staggering” 30% this year, and the industry can look ahead to double-digit growth each year through 2025, according to a Bloomberg.com analysis that predates the ambitious clean energy provisions in the US$369-billion Inflation Reduction Act adopted by the U.S. Congress last week.

“At the end of the day, the global solar picture is just staggering at this point,” Bloomberg senior clean energy analyst Rob Barnett told Yahoo Finance in late July. “We are on track to install something like 250 gigawatts (GW) of solar capacity this year. I know most folks don’t think in gigawatts, but that is a very large amount. It’s more than the installed capacity of a number of European countries.”

(A gigawatt is one billion watts of electricity generating capacity, enough to power about 750,000 North American homes.)

Yahoo cites massive growth in many parts of the world. China, already the world leader in solar capacity, plans to double its new deployment this year. Germany broke its solar generation record in the midst of a searing heat wave July 17, and solar plus wind generation covered 28% of U.S. electricity demand in April, an all-time high.

Barnett maintained the boom is just beginning. “There really is this big, top-line growth scenario that we see unfolding for all of the companies that are participating in the solar supply chain,” he said. And while the cascade of extreme weather events around the world is increasing concern about climate change, the big push is coming from high oil and gas prices driven by Russia’s invasion of Ukraine, coupled with plummeting solar costs.

“I do think there is increasing focus on all sorts of solutions to try to help manage emissions and tackle the concerns of climate change,” Barnett told Yahoo. “But I would actually argue that the bigger driver for clean energy demand, particularly here in Europe, is elevated energy costs.”

Though solar is still an intermittent power source without some form of storage, and fossil energy costs are beginning to come down, “the economics [of renewables] are already quite good,” he added. “And so you’d have to see such a sea change in terms of gas prices or coal prices, if you’re thinking about the power grid, to really reverse some of the trends. And I just don’t think there’s any appetite for it, either.”

• China installed nearly 31 GW of new solar in the first half of this year, a 137% increase over the same period in 2021, Reuters reports. Total installations are expected to hit 75 to 90 GW for the year, shattering last year’s record of 54.9 GW, said Wang Bohua, honourary chair of the China Photovoltaic Industry Association.

• In a release this morning, the Sun Day Campaign says renewables delivered two-thirds of new utility-scale power across the U.S. in the first half of the year, including 3.9 GW of solar, 5.7 GW of wind, and small contributions from geothermal, hydropower, and bioenergy. Data from the U.S. Federal Energy Regulatory Commission shows 192.5 GW of solar under development or on the drawing boards over the next three years, while utilities’ interest in fossil gas plummets to just 4,319 megawatts over the same period.

“That is less net new gas capacity by June 2025 than the new gas capacity that was added in the first half of 2022,” Sun Day writes. “For perspective, in June 2019, FERC had foreseen 21,679 MW of net new natural gas additions in the three-year pipeline. The newly-reported sharp drop in natural gas pipeline projects suggests a major reversal for its future prospects.”