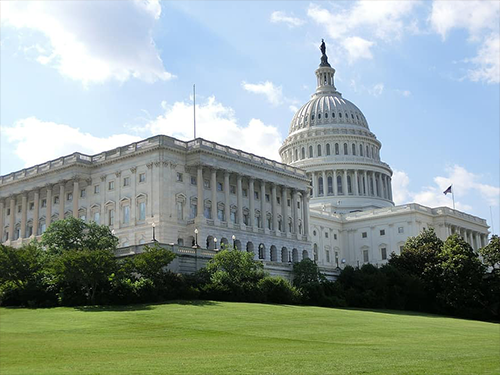 Friday’s historic vote “comes 34 years after a top scientist grabbed headlines warning Congress about the dangers of global warming,” The Associated Press reports. “In the decades since, there have been 308 weather disasters that have each cost the nation at least US$1 billion, the record for the hottest year has been broken 10 times, and wildfires have burned an area larger than Texas.”

After trying and repeatedly failing to regulate carbon emissions directly, Congressional supporters of the Inflation Reduction Act hope “to make clean energy so cheap in all aspects of life that it’s nearly irresistible,” AP adds. “The crux of the long-delayed bill, singularly pushed by Democrats in a closely divided Congress, is to use incentives to spur investors to accelerate the expansion of clean energy such as wind and solar power, speeding the transition away from the oil, coal, and gas that largely cause climate change.”

“This legislation is a true game-changer. It will create jobs, lower costs, increase U.S. competitiveness, reduce air pollution,” said Climate Reality Project founder and former U.S. vice president Al Gore. “The momentum that will come out of this legislation cannot be underestimated.”

Dan Lashof, U.S. director at the Washington-based World Resources Institute, reiterated earlier analysis showing that the bill will put the country within reach of meeting its Paris agreement promise to cut emissions 50 to 52% from 2005 levels by 2030. He said the plan will save the average U.S. household $500 per year in energy bills, create more than nine million job-years of employment, reduce pollution in “overburdened” and often racialized communities, prevent 4,000 premature deaths per year by reducing pollution, and deliver tax credits or rebates for electric vehicles, heat pumps, home electricity upgrades, and residential solar.

Canary Media has been digging into the details of the support the bill delivers for energy storage, solar, home electrification, decarbonized air travel, clean postal delivery trucks, environmental justice, and a U.S. manufacturing base for solar, wind, and batteries.

“This is HUGE,” tweeted Rep. Sean Casten (D-IL), who worked as a renewable energy executive before entering Congress in 2019. “The Inflation Reduction Act includes $300 billion to fight climate change, the largest federal clean energy investment in U.S. history. Let’s get this bill to the President’s desk.”

The Washington Post’s Steven Mufson has a long read on how drastically the politics of U.S. climate legislation have changed since the last failed attempt in 2010—and how Democrats have kept up.

“Last time, it sought to cap greenhouse gas emissions, and the fossil fuel industry fought back hard. Not this time,” Mufson writes. “Last time, some Republicans supported the measure, harking to an era when environmental protection was not so polarizing. Not this time.”

And “whereas President Jimmy Carter once pushed clean energy as a matter of personal, moral responsibility, the new bill treats climate change as a pragmatic pocketbook matter of consumer rebates and corporate tax incentives,” at a time when climate change is “a constant presence in shaping weather patterns, the economy, and daily life in much of the world, especially during the harsh summer months.”

“Democrats are advancing their climate bill with no Republican support, and their program is one of carrots, not sticks,” agreed Inside Climate News, in a story published hours before the House vote. “The idea is that an unprecedented $370 billion federal investment in clean energy—largely in the form of tax credits to encourage its development, as opposed to taxes on carbon to discourage use of fossil fuels—will be the push that transforms not only the economy but the politics of climate change.”

But while the bill is a “once in a generation victory” for the “septuagenarian lawmakers” who wrote it [albeit with leadership from decades-younger staffers] and the 79-year-old president who’s about to sign it into law, “younger Democrats and climate activists crave more,” the New York Times reports. “They look at the bill as a down payment, and they worry a complacent electorate will believe Washington has at last solved climate change — when in fact scientists warn it has only taken the first necessary steps.”

“This bill is not the bill that my generation deserves and needs to fully avert climate catastrophe, but it is the one that we can pass, given how much power we have at this moment,” said Sunrise Movement co-founder Varshini Prakash.

“We are very clear that it took so long because our Congress and Senate doesn’t look like the American people,” added NextGen America President Christina Tzintzun Ramirez. “The climate crisis is going to unfold on the majority of young people. Most of these congressional representatives will be dead by the time we face the consequences of their inaction.”

In an August 7 letter to members of Congress, Ramirez and about 50 other youth leaders reminded legislators that “your work is not finished.”

But for now, the focus of that work has shifted to implementation, with countless decisions at every level of government, industry, and civil society set to determine how much the legislation achieves. Venture capital investors are confident that the bill will “prime the pump” for a new generation of clean energy start-ups, BNN Bloomberg reports. State governments, on the other hand, may take the options and opportunities in the bill in different directions, The Huffington Post states, with some proportion of their decisions driven more by ideology than by the realities of the climate emergency—or even the massive opportunities in the transition off carbon.

“Federal funding can only go so far in a country where a patchwork of jurisdictions and slow-moving bureaucracies rarely align on the need to quickly construct large-scale clean energy projects,” writes HuffPo’s Alexander Kaufman. “Should a power plant owner build a gas-fired plant with carbon capture technology or go with renewables? Public service commissioners and regional grid operators will decide. Key permitting requirements? Various state regulatory agencies are in charge there. Can transmission lines or pipelines pass through a tract of rural land? County officials will choose whether to rezone the property.”

“Whether or not you have tens of billions of dollars in federal incentives, unless the state utility commission decides it wants to deploy more zero-carbon resources, it’s not going to happen,” Tyler Norris, a North Carolina-based renewable energy developer and co-chair of the Clean Power Suppliers Association, told Kaufman.

And with Republican states like Oklahoma, Texas, and West Virginia leading the charge against national climate action, “I do think you’ll see some of the fossil fuel states chip away at it in terms of what happens at the state level,” added Rich Sorkin, CEO of the climate risk consultancy Jupiter Intelligence.

“Everyone is taking it as gospel that the bill will reduce emissions by 40% by 2030,” tweeted Neil Chatterjee, former chair of the U.S. Federal Energy Regulatory Commission. “But EVERYTHING would have to [go] right: cooperation from Republican governors and legislatures—and possibly Republican Congresses and Presidents. Without R buy-in, that cooperation won’t come.”

Analysts are also pointing to this moment as a wake-up call for Canada.

“Suddenly, Canada is no longer the undisputed leader among North American countries in confronting climate change,” writes Globe and Mail climate columnist Adam Radwanski. The Inflation Reduction Act “is great news for the planet, as the world’s second-biggest polluter (after China) has gone a long way toward shedding its environmental laggard status,” he adds. “Whether it’s also great news for Canada, in terms of this country’s ability to compete economically in a decarbonizing world, will hinge significantly on whether Ottawa proves able to match Washington’s newfound urgency.”

“When the Americans get moving, they get moving really fast, and so we need to hold pace,” agreed Simon Fraser University energy economist Chris Bataille. “We often operate under the illusion that we’re separate because we operate under different jurisdictions, different legal systems, and different labour laws. But when it comes to the nuts and bolts of parts being made and the services we provide, we’re highly integrated.”