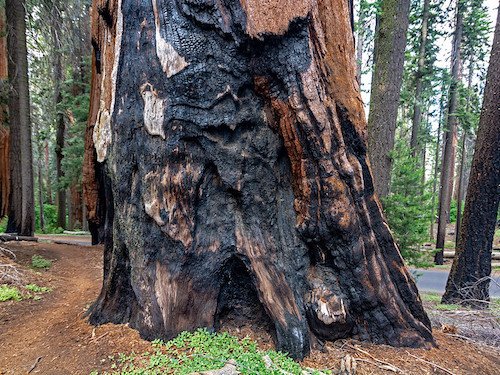 Sequoias are the largest trees on Earth, can live for more than 3,000 years, but are being increasingly affected in recent years by fire. But management of the giant sequoias in Yosemite National Park and elsewhere has shifted the vulnerability of the huge, mature specimens in the groves.

The excerpts republished by Wildfire Today are from a recent post in Outside magazine by Kyle Dickman a former member of the Tahoe Interagency Hotshot Crew who spent five seasons fighting fires and wrote a book about the Granite Mountain Hotshots, all but one of whom died in  the Yarnell Hill Fire in 2013.

Dickman’s brother, Garrett, is the forest ecologist at Yosemite and has been heavily involved in managing and attempting to save the giant sequoias. Here are the excerpts:

Garrett Dickman and Christy Brigham, the director of science at Sequoia and Kings Canyon National Park, are standing in front of an outhouse that firefighters saved from the Castle Fire, sitting in the patchy shade of a 2,000-year-old dead tree that they did not. Firefighters protect life and property before all else—even outhouses, so long as they have walls around them.

Listening to the two compare notes on their jobs makes clear that the fate of giant sequoias is almost entirely in the hands of a few middle managers, working at a few select parks, who navigate arcane environmental laws and a financing system cobbled together with public grants. If sequoia death is a product of American gridlock, sequoia survival will happen because of the tenacity of a few individuals.

“These next couple of years could be bad in ways we haven’t experienced yet,” Garrett added. The Park Service knows what’s coming. After 60 years trying to walk backward by managing their lands to be “vignettes of primitive America”—the vision of the conservationist Starker Leopold, who devised the agency’s guiding philosophy from the late 1960s until 2021—the Park Service has changed course to officially recognize that park managers must intervene in ways considered antithetical to their mission two years earlier.

The new policy asks the public to open its mind to everything from mechanical thinning to very limited logging. “We saw how it goes when you don’t do anything,” Christy said. “It goes terribly. It goes thousands of 2,000 year old trees burned up in an instant.”

The net result, Garrett Dickman added, is that “We don’t get to have nice things anymore.”

“The [U.S.] Clean Water Act. The National Environmental Policy Act. The National Historic Preservation Act. The Threatened and Endangered Species Act. Fantastic laws all of them,” Christy said. “But they were built at a time when the main threat was people doing bad things—logging, mining. Now, the main threat is inaction. Bureaucracy is slow. Wildfire is fast. And bureaucracy needs to get a hell of a lot faster if we want to persist and not lose everything we’ve got left.”

Read the entire article on Outside here.