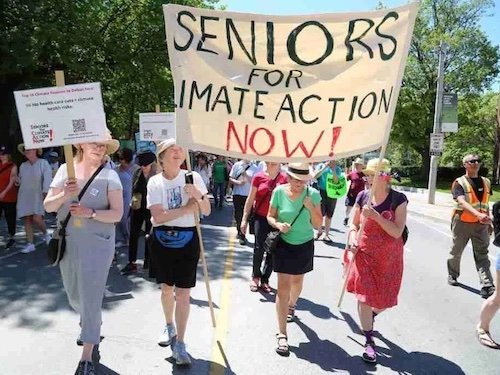 In February, 2020, professor Sheldon Pollock, 74, was recently widowed, approaching retirement from his tenured position at Columbia University, and thinking about what would come next for him.

His granddaughter Elea, a high schooler in San Diego at the time, was helping to organize a school walkout as part of the climate movement Fridays for the Future. Pollock, who had come of age in the 1960s and protested against the war in Vietnam, had long donated to environmental organizations like 350.org, but Elea’s activism inspired him to do more, Nexus Media News reports.

“Like a lot of people of my generation, I was [first] involved in anti-war [protests] and Central American solidarity in the 1960s and 1970s,” he said. In what he described as his “second act,” he devoted himself to scholarship, teaching, and raising his two daughters, leaving less time for political engagement.

“But many of us who are at the end of our careers or recently retired are regaining some of that activist, engaged spirit,” Pollock said. “We want to make sure that we leave the world better than it is now.”

Baby boomers are often derided for not taking the climate crisis seriously enough. According to a Gallup poll, 56% of Americans 55 and older said they worried about climate change “a great deal or fair amount,” compared with 70% of Americans 18 to 34.

But many do feel responsible for the climate crisis. According to a recent AARP–NORC poll, 45% of Americans over age 50 say their generation made climate change worse (22% said they were leaving the environment better off). Some, like Pollock, say they plan to dedicate the next stage of their lives to the climate movement.

Pollack is a volunteer with Third Act, an organization that mobilizes Americans over age 60 for “progressive change.” Co-founded in 2021 by activist and journalist Bill McKibben, the group has 20 working groups across the country.

Pollock, who most recently taught at Columbia University, runs an educator working group within Third Act that is organizing to register young voters and divest pension plans from fossil fuels. He said he is also speaking with other educators about how to support university divestment efforts.

The name Third Act is borrowed from a memoir by actor and activist Jane Fonda who, earlier this year, launched a climate political action committee that endorses candidates willing to take on the fossil fuel industry. Like McKibben, Fonda, 84, has called on other older Americans to take up the fight against climate change.

“Folks in this age cohort were on the front lines of the civil rights movement. They were the progenitors of the environmental movement with [the establishment of] the first Earth Day,” said Vanessa Arcara, president and co-founder of Third Act.

Arcara previously worked with McKibben at 350.org; she said people over 60 made up the “heart and soul” of the organization’s volunteer corps. “We felt there was this wide open space to start talking to folks who had 40 or 50 years’ worth of activism, passion, and skills and wanted to find purpose and connection again,” she said.

In the seven months since the group was founded, more than 15,000 people have registered for Third Act events—online meetings where participants can learn how they can get involved with the climate movement, Arcara said. This spring, the organization put its mobilizing power to the test: After McKibben called on U.S. President Joe Biden to invoke the Defense Production Act to ramp up the manufacturing of clean energy technology, thousands of “Third Actors,” as Arcara called them, wrote to the president in support of the idea. The president invoked the Act in June.

Arcara added that grassroots organizing could take on even more significance amid recent setbacks: a stalled climate agenda and a hamstrung Environmental Protection Agency.

Part of the power of bringing older Americans into the climate movement is their generation’s unprecedented spending power. They also hold a disproportionate amount of wealth: Americans 57 and older (baby boomers and those belonging to the silent generation) own 70% of U.S. wealth despite making up just over a quarter of the population, according to data from the Federal Reserve. Millennials own about 5% of U.S. wealth, despite making up more than 20% of the population.

Given all that wealth, older Americans have the best chance at convincing banks to stop investing in fossil fuels, Arcara said. To that end, Third Act is collecting pledges from banking customers who say they will close (or never open) accounts with any of the country’s “big four” banks—Bank of America, Chase, Citibank, and Wells Fargo—if they continue to invest in fossil fuels. Third Act working groups have held dozens of demonstrations pressuring those banks to stop funding the fossil fuel industry, Arcara said.

“We have to assume that there’s significant power in the people who actually hold the resources saying, ‘Enough is enough,’” she said.

That’s something Hazel Chandler, 76, tries to harness in her work as a volunteer with Elders Climate Action network and Moms Clean Air Force, where she’s an Arizona field coordinator.

Chandler, a great-grandmother, said she’s made it her mission to bring fellow older Americans into the climate movement. “I try to help them understand that there are concrete ways they can get involved,” she said.

That has included gathering signatures to send to local representatives (including one successful bid to halt the expansion of a gas-fired power plant outside Phoenix) and campaigns to get school districts to apply for Clean School Bus funding.

When Chandler organized a meeting with Arizona lawmakers, she said they were surprised to see their older constituents advocating for environmental policies. “I heard them say again and again, ‘We didn’t think older people cared about climate,’” she said.

Like Pollock, Chandler was involved in the anti-war movement of the 1960s and 1970s. She said she finds today’s youth-led protest movements energizing.

“There was a time, [after] the 1960s and 1970s, when it was really hard to get people to rally around causes,” with the notable exception of HIV/AIDS and LGBTQ activism, she said. “There just wasn’t the mass public involvement in making social change that we’re seeing now.”

In recent years, Chandler has brought older activists to youth-led climate protests. “The kids’ message is much more powerful when we all stand behind them,” she said. “It’s not about telling them what to do. It’s about supporting what they’re doing and being able to give our elder perspective.”

That perspective includes memories of a cooler planet. When Chandler first moved to Phoenix in 1977, “it cooled down at night,” she said. She remembers the first time the temperature passed 115°F/46°C, in 1991. “Now it happens every summer,” she said.

Unlike Pollock and Chandler, Myrtle Felton never considered herself an activist. The 68-year-old grandmother found her way to the environmental justice movement four years ago after losing her husband, three other relatives, and a close friend in the span of three months. She attributed their deaths, from ailments including respiratory disease and diabetes, to local pollution.

Felton lives in Convent, Louisiana, in a region dotted with plants that some call “Cancer Alley.” The state as a whole has the nation’s third-highest rate of cancer diagnoses, according to the Centers for Disease Control and Prevention.

“That’s when I said, ‘Enough is enough,’” Felton said. “It’s just not right to be putting all these chemical plants in a predominantly Black area. This district is overburdened.”

She joined a community-wide effort that successfully lobbied against a new plastics plant in a nearby town. The following year, she and two friends founded Inclusive Louisiana, an environmental justice group, to warn others about the health risks of the surrounding industry. But many of her neighbors view the pollution as a necessary trade-off for job creation, she said.

Like Pollock and Chandler, Felton said she’s thinking about the planet her three grown children and three grandchildren are inheriting. She worries both about the immediate effects of living near pollution plants and the longer-term prospects of living in a community threatened by increasingly intense and frequent hurricanes. Last year, her own home was badly damaged by Hurricane Ida.

For Felton, her activism felt like a natural part of growing older. She said that in the late 1990s, it was a group of older women who led the fight against another plant coming to her town. Back then, she was too busy raising her own children to get involved.

“But now we’re the older generation,” she said. “I have an obligation to my community. I see my role as trying to help the community survive.”

This story previously appeared on Nexus Media News and is part of Covering Climate Now, a global journalism collaboration strengthening coverage of the climate story.