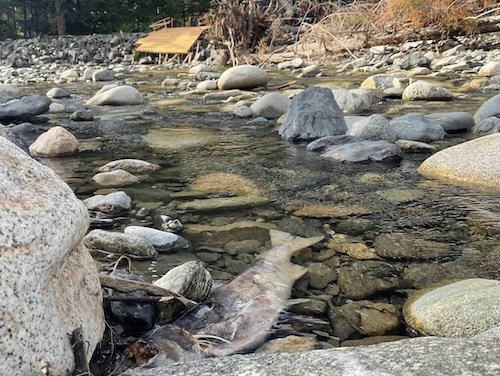 Campaigners and local residents are using photos, video, and drone footage to document a Trans Mountain pipeline work site they say is impeding an early salmon run and leaving dead fish along the Coquihalla River in British Columbia.

Trans Mountain maintains the work complies with its federal and provincial permits, and a fisheries officer with the Department of Fisheries and Oceans (DFO) who visited the site Monday says the fish deaths have nothing to do with the pipeline project.

In a release last week, TMX opponents at Protect the Planet said dead fish were showing up adjacent to Trans Mountain’s in-stream work along the Coquihalla, about three kilometres from where it meets the Fraser River near Hope, B.C.

“It’s very unusual to see so many dead salmon in Coquihalla this early in the spawning season,” said local resident Dr. Kate Tairyan, a senior lecturer and program director in the Simon Fraser University health sciences program, who photographed the dead fish between August 1 and 3. “I am appalled that Trans Mountain is granted permissions to carry forward with cutting a trench in the stream in an area so drastically altered by the devastating flooding of November, 2021.”

The release said further exploration in other parts of the river “revealed live salmon swimming upstream, but few seemed able to swim past the TM worksite.”

Protect the Planet member Peter Vranjkovic distinguished between the underground tunneling Trans Mountain has undertaken on the Fraser and many other rivers, and the open trench method the company is using to replace part of its existing pipeline and install new, larger pipe at the Coquihalla site. Rather than diverting the river before starting work, he said in an email, “they have placed up to 20 pumps and an equal number of large hoses in the river, slightly upstream of the crossing,” producing a lot of water pressure and “creating lots of turbulence for the fish”.

Tairyan said she’s found nearly two dozen dead fish in the area in the last week. When she and a colleague cut open five of the fish, four of them were carrying eggs—after a biologist hired by Trans Mountain assured her they had already spawned.

“They’re migrating, they’re here to spawn, they have a bellyful of eggs,” she told The Energy Mix. “This river is an important migratory route for the salmon, and all five species of Pacific salmon choose this corridor to migrate, as well as steelhead trout. So these fish are trying to swim upstream, they’re clearly migrating, and the construction is in their way.”

Vranjkovic added that more fish from the “very larger early run” on the Fraser “may have turned to other rivers and streams to spawn” rather than continuing on to central and northern B.C. because of unusually high water levels this year. “When DFO gave Trans Mountain its permit, it was of the opinion that doing the instream work in August would not have significant impact on the fish,” he wrote. “However the early run means the works are having a major impact.”

The pipeline work “is happening at the same time that salmon are trying to pass and go wherever they want to be,” Tairyan agreed. She told CBC the fish are getting caught between excavators, construction equipment, and water pumps. “This is a barrier, a physical barrier for the salmon to pass and you can see them struggling to do that,” she said.

“I’m trying to be very careful not to connect the fish mortality with the construction directly, because I don’t have that kind of evidence,” Tairyan told The Mix. But she said it was “surprising and shocking” to see the difference between the Trans Mountain biologist’s conclusion and what she found out on her own, adding that TMX had also blocked site access for Indigenous monitors and scientists who “are required to be present at the site, testing the waters”.

Tairyan said she and her daughter had begun placing calls to DFO’s emergency phone line August 1. Federal fisheries officer and regional habitat coordinator Perry Powers, who was at the site August 8, agreed that some of the fish made their way to the Coquihalla because they couldn’t get through the Fraser River route. But he said the dead fish near the construction site were weaker, “pre-spawn sockeye salmon” that never made it to their spawning site.

“Increased water flow caused them to divert because they get tired,” he said in an interview. “Basically, they’re immature eggs, because those fish would travel a lot farther,” some of them as far as the Stewart River in northern B.C.

“So it has zero to do with the Trans Mountain pipeline crossing.”

In an email, DFO media relations officer Victoria Waizmann said the department’s regulatory staff visited the site the day after Powers, along with Indigenous monitors from the TMX Indigenous Advisory and Monitoring Committee. “DFO staff observed sediment was being managed and monitored appropriately, juvenile fish were being removed from a side channel located downstream and outside of the construction area,” she wrote. “There were no barriers to fish passage with equipment in the water. All works were in compliance with conditions of the applicable Fisheries Act authorization.”

At least one of the videos posted by Protect the Planet clearly shows a fish struggling against a length of piping in its path.

A TMX media relations officer identified only as “Allison” said all the work at the site is being done “in compliance with Canada Energy Regulator-approved Environmental Protection Plans, as well as permits issued by the Department of Fisheries and Oceans Canada (DFO) and BC Oil and Gas Commission.” She added that company staff observed “a small number of early-run sockeye” before work in the river began August 2.

“Fisheries biologists documented that all of these fish were spent or burnt-out adults through this reach,” she wrote in an email. “DFO is aware of this occurring throughout many of the Lower Mainland tributaries.”

On Tuesday evening, B.C. Environment Minister George Heyman said he planned to look into situation. “I’ve heard concerns from British Columbians around the federal government’s Trans Mountain work on the Coquihalla River,” he tweeted. “B.C. is taking action to investigate areas within our jurisdiction.”

May called construction during a sockeye salmon run “an outrageous abuse,” adding that “if it were a private sector company, we’d say shut it down. We own it, and it needs to be shut down.”