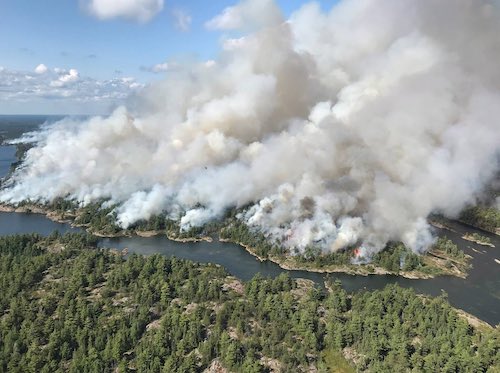 The reopening of a Newfoundland highway that had been closed for days because of raging wildfires provided hope Tuesday that much-needed supplies would finally arrive in stranded communities along the island’s south coast.

Steve Crewe, mayor of Hermitage-Sandyville, told The Canadian Press he hoped the Bay d’Espoir Highway would be open long enough for seven or eight trucks to bring groceries to communities in his area on Newfoundland’s Connaigre Peninsula. The rural, wooded road is the only one connecting the region with the rest of the province, and its prolonged closure meant shelves in local stores were growing bare.

Officials say the forest fires in central Newfoundland began on July 24 with a lightning strike. As of Tuesday afternoon, the provincial Forestry Department said the two largest fires encompassed an area of more than 162 square kilometres, CP writes. The blazes remained out of control.

The Bay d’Espoir Highway has been plagued with intermittent closures since the fires began. Newfoundland and Labrador Premier Andrew Furey told reporters Tuesday afternoon the road “may not be passable for long.” The reopening would allow at least some desperately needed supplies to get through, Furey said, “hopefully for an extended period of time.” He said there was already one transport truck en route to the area.

Cooke Aquaculture has several operations on the Connaigre Peninsula, and the company said Tuesday it was sending two of its vessels to the town of Fortune, on the Burin Peninsula, to pick up supplies and deliver them to the cut-off communities nearby. The vessels would arrive in Fortune on Wednesday and deliver 75 pallets of food and supplies to residents on the peninsula, the company said in a release.

The news came after two other plans to distribute food to the stranded communities had fallen through. On Sunday, the province hatched a plan to dispatch a small ferry to the area to transport supplies and relocate stranded people. But the vessel broke down, and officials said Monday night the boat was docked in the provincial capital of St. John’s.

There were also plans to send a fleet of helicopters carrying groceries and supplies to the Connaigre region on Tuesday morning. But as much-needed rain fell onto the fire area, the smoke and wind conditions made it impossible for the helicopters to make the trip, Crewe said.

“Every time we set something up, something will stop it,” Crewe said. He cracked a joke about not knowing what people on the Connaigre Peninsula have done to deserve the string of misfortune.

Lloyd Blake, mayor of Harbour Breton, located about 50 kilometres east of Hermitage-Sandyville, said Tuesday his town had also been counting on the helicopter deliveries. “People are still pretty good,” he said, but “they’re running out of bare essentials—things like the milk, vegetables and fruits.”

Harbour Breton hosted a Come Home Year event over the weekend, inviting all those who had moved away from the community to come home for a visit. Blake said about 100 people remained stranded in the town as of Tuesday morning following the weekend’s events.

Provincial officials called a state of emergency in the Connaigre Peninsula area on Saturday and in central Newfoundland towns near the fire, including Grand Falls-Windsor, located about 25 kilometres from the largest of the two fires. Furey said Tuesday that some patients from health care facilities in Grand Falls-Windsor, including residents of long-term care facilities, had been evacuated as a precaution, but emergency services at the town’s hospital were still running.

“I know it’s a stressful time for the citizens of central Newfoundland,” Furey said. “Let me tell you that you have the full force of all levels of government across Canada helping, and wanting to help, navigate through this difficult time.”

This report by The Canadian Press was first published Aug. 9, 2022.