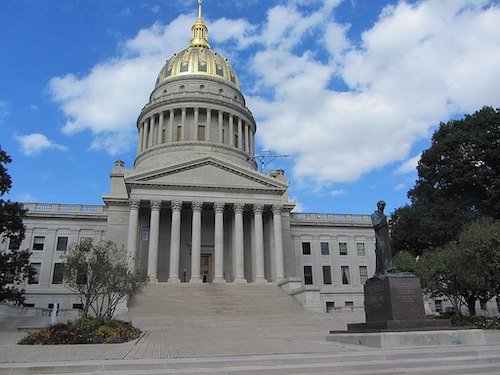 Slamming climate action as “irrational” and “woke,” and positioning themselves as saviours of local economies, many Republican state treasurers have spent the last 18 months working to hobble and punish private and public sector efforts to wean the United States off fossil fuel dependence.

West Virginia state treasurer Riley Moore has notified financial giants BlackRock, Goldman Sachs, JPMorgan, Morgan Stanley, and Wells Fargo that their decisions to reduce their investments in coal mean they will no longer be welcome to bid on state government contracts.

Moore’s move to shun the lenders comes four months after West Virginia made it illegal for state agencies to invest in businesses that are less than full-throated in their support for fossil fuel companies.

In a release on the passage of his “landmark fossil fuel banking protection bill,” Moore stated “we are leading the way to protect our coal, oil, and natural gas workers and companies from unfair, un-American boycotts of these critical energy industries.”

Moore said his new law “now puts the banking sector on notice: If you refuse to do business with our people, we won’t give you our people’s business.” The release says Senate Bill 262 “will allow the Treasurer’s Office to create a ‘Restricted Financial Institution List’ consisting of banks that have been shown to refuse, terminate. or limit commercial activity with coal, oil, or natural gas companies without a reasonable business purpose.”

Moore was galvanized to craft Bill 262 last November when he learned of a similar bill signed into law by Texas Governor Greg Abbott.

Together with his peers in Arkansas and Louisiana, Moore has also yanked “more than $700 million out of BlackRock, the world’s largest investment manager, over objections that the firm is too focused on environmental issues.” The Times says the treasurers of Utah and Idaho have also been pressuring the private sector to drop other causes they label as “woke,” along with climate action.

Pennsylvania, Arizona, and Oklahoma state treasurershave also “joined a larger campaign to thwart the nominations of federal regulators who wanted to require that banks, funds, and companies disclose the financial risks posed by a warming planet,” the news story aids.

While emails supplied by the Times courtesy of the watchdog Documented reveal Moore as a major player in state treasury efforts to punish climate actors, the chief organizer behind the effort is a small, under-the-radar industry non-profit called the State Financial Officers Foundation.

“Once focused on cybersecurity, borrowing costs, and managing debt loads, among other routine issues,” the Kansas-based foundation is now running energetic interference for fossil interests, with considerable assistance from the Heritage Foundation, the Heartland Institute, and the American Petroleum Institute.

“At conferences, on weekly calls, and with a steady stream of emails, the foundation hosted representatives from the oil industry and funneled research and talking points from conservative groups to the state treasurers, who have channeled the private groups’ goals into public policy,” the Times writes.

While “Democratic lawmakers in California and New Jersey are working on legislation that would require their state pension systems to divest from fossil fuels,” the paper adds, these lawmakers “have not mounted anything like the national campaign being orchestrated by the State Financial Officers Foundation.”

The foundation is also perpetuating climate denial. After the U.S. Securities and Exchange Commission proposed new rules in June that would require companies to disclose their climate exposure, the foundation decried the proposal as an example of “irrational climate exceptionalism, elevating climate issues to a place of prominence in disclosures that they do not deserve.”

The letter followed a conference call between state treasurers, foundation CEO Derek Kreifels, and a representative from the American Petroleum Institute.