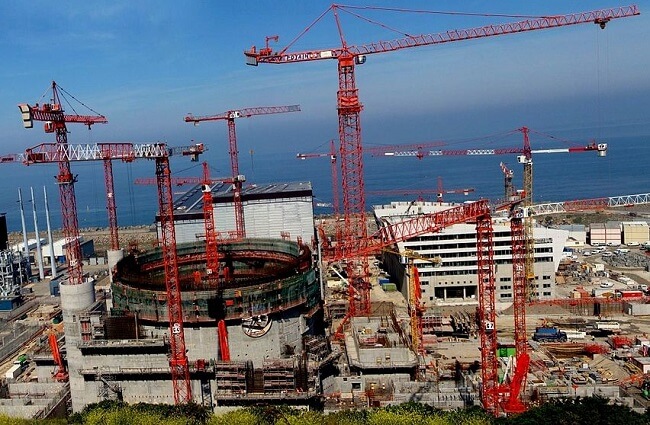 Heat waves and drought in France are adding to Europe’s energy crisis which began when Russian invaded Ukraine—but the decline in the French electricity production is not just a temporary blip. France’s nuclear industry is in serious trouble.

France, with its 56 nuclear reactors, has been a net exporter of electricity for decades, supplying neighbours Italy, Germany, and the UK, but is now having to import electricity at high market prices. Half of the country’s reactors are closed down because of  recently discovered corrosion problems or delayed routine maintenance caused by the COVID-19 epidemic.

An already serious problem is compounded by the ongoing drought and heat wave that is increasing demand for power for air conditioners and reducing the flow of the Rhone and Garonne rivers that are used to cool nuclear power plants. Water temperatures in the rivers are reaching temperatures that threaten fish life and breach licence conditions.

A number of plants that are still operating are being restricted as a result. The latest to be affected is the St Alban Plant, down from 2,600 to 700 megawatts, and the Tricastin plant where two reactors, already turned down, will remain at 400 megawatts instead of being brought up to full production.. Power supplies began to be reduced at plants in mid-July as the heat waves began to bite. The minimum operating output is being maintained at these stations to keep the grid steady and avoid blackouts.

EDF, the owner of the plants, estimates its power output this year will be the lowest in 30 years, at the same time reporting a half-year loss of €5.3 billion (US$5.34 billion). The company offered no immediate prospect of its situation improving, and the heat wave is continuing.

In a devastating summary of EDF’s troubles, Jérôme Guillet, an expert on the French power industry, posted a detailed analysis of strategic questions facing the company.

“France, its political class and its population, has lived in a blissful world where the country’s electricity was both cheap and decarbonated,” he commented. “It has nothing but contempt for attempts by others, in particular Germany, to transform their power sector with renewables, mocking them for high prices, still-high carbon emissions, dependency on fossil fuel imports, dismissing renewables at unreliable and expensive, and seizing on any temporary upward blip on the downward trend in coal consumption as proof of the failure of the Energiewende (the German energy plan).”

The most serious problem at present, he says, is the closure of 12 plants which have been shut down due to corrosion problems in vital pipework which could compromise reactor safety. Perhaps the worst part of this for the company is that the corrosion occurs mostly in its largest, most modern plants. How quickly they can be repaired is not clear, but it is expected to take some years.

The second problem is the company’s new build at Flamanville in Normandy, intended to be a flagship plant for a new generation of nuclear generation but now 10 years late and with costs €15 billion over the original budget—about four times the original estimate. Final approval to build the plant was given in 2007 and it was due for completion in 2012. It is now expected to come on line in mid-2023, and even that date is not firm.

The problems at Flamanville are mirrored at Olkiluoto in Finland, Hinkley Point in the UK, and to a lesser extent Taishan in China. These are all roughly the same design of European Pressurised Water Reactors as the one at Flamanville. The Finnish reactor started construction even earlier and is still not operating at full power. Hinkley Point in Somerset, which is the latest of these constructions, has already been pushed back to a starting date of approximately 2027, 10 years after the original target, and is already running billions over budget. One reactor at the Chinese plant at Taishan has been stopped for a year while cladding on its fuel rods are modified.  The precise solution to the problem has still not been disclosed.

These new reactors were supposed to be the start of a much larger building program in France to replace the aging nuclear fleet, many now approaching 40 years old and needing increasing amounts of updating and maintenance to conform with safety standards. Constructing new plants or updating the older ones is going to cost huge amounts of money which deeply indebted EDF does not have. Meanwhile, EDF continues to incur heavy losses because of the need to buy in electricity from Switzerland, the UK, and other neighbours at premium prices, higher than the French government allows it to charge its customers.

Guillet says the problem has been compounded by the fact that French politicians and the public have been complacent about their nuclear fleet, believing its excellent past record of producing more power than the country needs would continue.

“The country is not ready to discuss any solution outside of nuclear,” he writes. “The notion that its existing nuclear plants are getting dangerously old and unreliable is largely ignored, and the fact that EDF has proven unable to build the next-generation EPRs is either seen as a temporary blip, or a plot by outsiders to weaken the country (anti-nuclear policies, pushed in particular by Germany, are seen to have willfully weakened France’s industrial base). Renewables, despite all evidence to the contrary, are still seen as either a useless greenwashing sideshow or a dangerous distraction. That makes it almost impossible to have a serious conversation about what to do next.”

As a result, the country is compounding its own energy crisis and that of the rest of Europe.