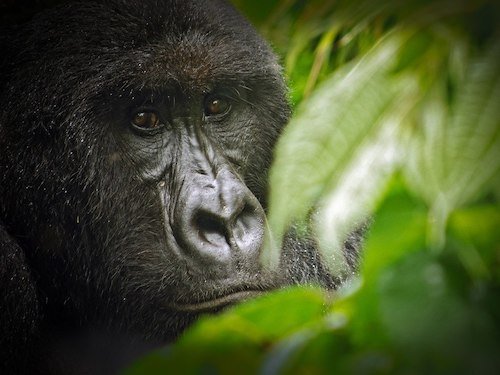 A scant eight months after Congo President Félix Tshisekedi joined other world leaders in a 10-year pledge to protect the world’s second-largest rainforest, the country is setting out to become “the new destination for oil investments” by auctioning off vast swaths of territory for drilling—including carbon-heavy peatlands and parts of Virunga National Park, the world’s most important gorilla sanctuary.

“That’s our priority,” Mpanu told the Times last week. “Our priority is not to save the planet.”

“If oil exploitation takes place in these areas, we must expect a global climate catastrophe, and we will all just have to watch helplessly,” countered Greenpeace Africa forest campaigner Irene Wabiwa.

At last year’s COP 26 climate summit in Glasgow, Tshisekedi was one of more than 100 national leaders representing more than 85% of the world’s forests who vowed to halt and reverse deforestation and land degradation by 2030. At the time, analysts said the deal was short on funding, and within a couple of days one of the other major signatories, Indonesia, was backtracking on the announcement and disputing the way then-UK prime minister Boris Johnson had characterized the agreement.

But the Glasgow Forest Pact still included US$500 million in international pledges to Congo over five years, the Times says.

“Congo announced the auction in May, with a video posted on Twitter that showed a shining river nestled in a deep bed of lush rainforest,” the Times writes. It initially announced sales of 16 oil and gas blocks, 13 onshore and three offshore, with bidding to take place July 28-29 in Kinshasa.

“Environmental groups were outraged,” the news story states. But “last week Congolese officials doubled down,” increasing the offer from 16 blocks to 30, 27 for oil and three for gas.

“The auction highlights a double standard that many political leaders across the African continent have called out: How can Western countries, which built their prosperity on fossil fuels that emit poisonous, planet-warming fumes, demand that Africa forego their reserves of coal, oil, and gas in order to protect everyone else?” the Times writes. “And it raises a question asked by many communities whose very survival is based on cutting trees for sale or for cooking fires: If they protect carbon stocks of incalculable value to the whole world, what do they get in return?”

In Congo, the paper adds, many officials “believe that after decades of colonialism and political mismanagement, their country’s needs should be prioritized against those of the world.”

“Maybe it’s time we get a level playing field and be compensated,” Mpanu said.

Bidumbu said the deal would increase Congo’s oil production from about 25,000 to a million barrels per day and deliver $32 billion in annual revenue at today’s prices, more than half the country’s GDP.

Scientists say the drilling and extraction could destroy rainforests and peatlands that are one of the last lines of defence against climate calamity. But Mpanu insisted the auction is not just a ploy to secure a less miserly deal from rich countries on international climate finance.

“We’re not into threats,” Mpanu told the Times. “We have a very humble attitude. We have a sovereign right to go ahead.”

But while Mpanu said fossils could engage in “surgical” drilling to avoid damaging peatlands, experts said the activity would likely drain and dehydrate the bogs, leading them to die out and release the massive amounts of carbon they sequester. Those releases “could be a type of tipping point, effectively, for global climate,” warned University of Leicester physical geography professor Susan Page.

Based on other African countries’ experience with oil and gas development, the Times warns that Congo might not see the bounty its political leaders are counting on. Rather, “it could mean a fate some call the ‘resource curse’, in which citizens don’t benefit from their country’s natural wealth and economic development remains anemic. In Nigeria, oil is the mainstay of the economy but its production has also led to devastating spills and widening inequality. In Equatorial Guinea, the majority of the population lives below the poverty line and reaps no benefit from the country’s vast oil wealth.”

The Times has more on how the discussion and the politics around the fossil leasing decision have played out in Congo.