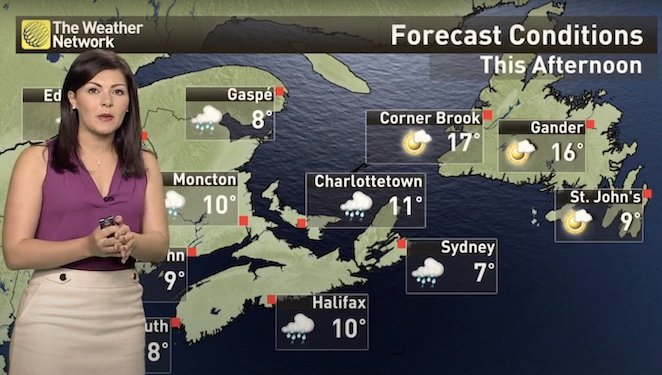 The CTV News weather anchor for Vancouver Island says he and his colleagues tried to hammer home the seriousness of the unprecedented extreme heat event to the public, but there were still those who failed to heed the warnings forecasters were issuing, The Canadian Press reports.

“It was really helpless seeing the result of it and seeing that many people suffer through it,” Dean, a weather specialist for 16 years, said of the heat dome that resulted in more than 600 deaths.

“I think we did a very good job as a weather community, as a forecasting community, to give plenty of notice to make adjustments, but we still got the ‘Well, it’s not going to be that bad.’ And I think what it showed us is that it can be that bad.”

Dean is among several Canadian on-air weather personalities who say they’ve been shifting their tone and approach in light of worsening climate change.

While on-air forecasters can be seen by some as typically more light-hearted television personalities, Dean said he’s been making an effort in the last five years to share “a bigger picture” with his audience, delving into why a region is seeing certain weather conditions and how they could affect those living there.

“I’ve taken a very educational route to this when I present my forecast and really dig into the science of it,” he said. “So that I can kind of show people really what’s going on, explain the reasons why we’re getting this and try to explain why it’s a crisis.”

CBC meteorologist Colette Kennedy, who’s been reporting on the weather since 1995, said she’s also changed her approach to her job as more extreme weather events occur.

That’s meant reminding herself that it’s OK not to end weather forecasts in a “happy and pleasant place,” she said.

“We tend to be talking in upbeat tones when we’re talking about just general forecasting, the difference being when there’s severe weather, then it’s very serious and it’s life-threatening, and you take a very different approach,” she said.

“Now there’s this place in between where you’re talking about just a forecast, it’s not severe weather in the sense of tornadoes and severe thunderstorms, it’s severe in the sense of the long-term effects to our planet. And I have to get comfortable with giving bad news.”

Jim Abraham, president of the Canadian Meteorological and Oceanographic Society, said the “unique challenge” for meteorologists and on-air weather personalities when it comes to climate change is preparing the public “for something that they’ve never experienced before.”

“Something that all meteorologists are dealing with around the world is, how do we communicate risk in a way that’s well understood by the public?” he said. “I certainly think it’s a work in progress.”

Abraham said on-air weather personalities have long forecasted temperatures, humidex levels, the strength of winds, and the amount of precipitation.

But they should also share the “impacts of those particular weather elements,” he said, and what people can do to minimize the effects of such weather on not only the general population, but also those who are more marginalized and vulnerable.

Abraham added that there needs to be greater collaboration between governments, meteorologists, on-air weather personalities, and emergency managers to ensure that the messaging put out is “consistent and clear.”

“I don’t think the public recognizes the risk with heat, for example,” he said. “I doubt many Canadians realize that the largest loss of life from a weather event in the history of Canada took place in British Columbia last year with the heat dome.”

Kennedy, with the CBC, said it’s important that everyone working in the field of meteorology adapts as climate change continues to affect people’s lives.

“We’ve been concerned about climate change for a long period of time, but progress is slow,” she said. “We don’t have the luxury of time with the extremes and life-threatening conditions.”

This report by The Canadian Press was first published July 26, 2022.