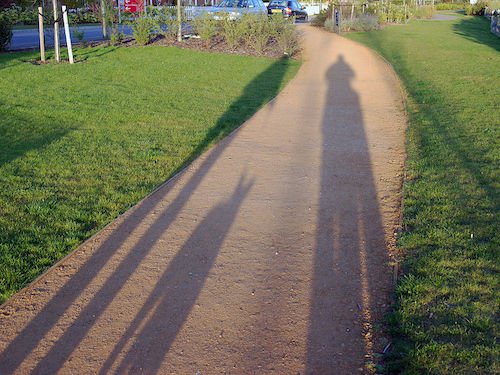 Long promoted as the best metric of a sustainable life, the carbon footprint should be understood as just one part of everyone’s “climate shadow”—the sum of how our life choices, good and bad, intersect with the climate crisis, writes climate journalist Emma Pattee.

The “carbon footprint”—a tool that’s supposed to help youcalculate your contribution to climate change—was the brainchild of fossil giant BP, and has kept us all nibbling in isolation at the edges of climate action, Pattee writes.

That’s because “our footprints don’t paint an accurate picture of our true individual impact on the climate crisis,” she explains. It puts the focus on low-impact actions like recycling or turning off lights, instead of more meaningful work like lobbying local politicians or speaking up at work about wasteful practices.

“Imagine if Greta Thunberg had decided to devote her attention to using less water or ditching dairy products instead of creating #FridaysforFuture.”

That’s why the footprint concept needs to be subsumed into a larger, far richer metric, Pattee says: an individual’s “climate shadow.”

A composite of consumption patterns, choices, and the degree of attention one actually pays to the climate crisis, Pattee offers the carbon shadow as a means to “visualize how the sum of our life’s choices influence the climate emergency.”

“Think of your climate shadow as a dark shape stretching out behind you,” she advises. “Everywhere you go, it goes too, tallying not just your air conditioning use and the gas mileage of your car, but also how you vote, how many children you choose to have, where you work, how you invest your money, how much you talk about climate change, and whether your words amplify urgency, apathy, or denial.”

Unlike a carbon footprint, the climate shadow “includes actions that defy easy calculation,” like one of her friends who chose not to have children “due to climate concerns”, and another who “helps with our local utility company’s green energy program.”

It’s the potential to encourage a positive, collective, “contagion” that really sets the idea of a climate shadow “head and shoulders above the concept of a carbon footprint,” Pattee writes.

Just as then-U.S. attorney general Robert Kennedy observed in a March, 1968, campaign speech that GDP “measures everything… except that which makes life worthwhile,” Pattee points to the same narrow, life-denying calculus in the idea of a carbon footprint: “It measures everything except what actually matters.”

A “bracing moral inventory” and “a kind of spiritual reckoning” will be required from each of us “if we are going to work together to keep the worst of the climate crisis from happening,” she says. But that can begin with focusing far less on shrinking our individual carbon footprints, much more on lengthening and deepening our climate shadows, whose cooling power in the collective will be very great indeed.