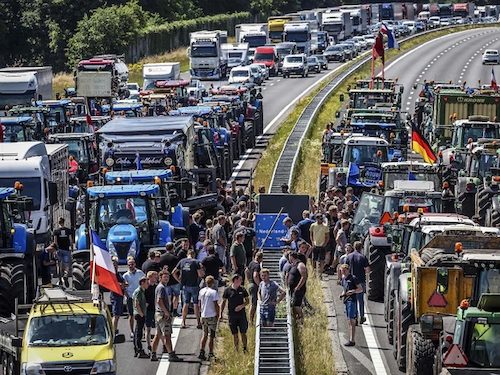 Close to 40,000 Dutch livestock farmers have launched protests in response to a new government climate proposal. The plans were announced by lawmakers in June, committing the country to cutting greenhouse gas emissions in half by the end of this decade. The proposal includes nitrogen emissions from animal farming, and officials have made clear that the Dutch animal farming industry will have to comply with new restrictions on fertilizer use beginning in 2023.

The response was swift, Sentient Media reports. Striking farmers blocked highways, airports, and food distribution centres, with some threatening to slaughter cows in front of the Dutch parliament. Others emptied tanks of manure outside the home of the cabinet minister who is overseeing reforms. In the village of Moerdijk, striking farmers formed a constellation of 400 tractors to spell out the words “no farmers, no food.”

Unsurprisingly, these dramatic protests quickly captured the attention of news outlets beyond the Netherlands. Yet most of this international media coverage has reported on the protest by characterizing it as a homegrown effort led by the independent owners of small family farms.

The coverage continues to leave out key players—Dutch agribusiness interests who back these protests in hopes of maintaining the status quo. The industry that helped turn the Netherlands into a nitrogen pollution hotspot is now working behind the scenes, hoping to prevent regulatory efforts to draw down emissions.

The story has strong echoes in Canada, where the fertilizer lobby is mobilizing questionable data and leaning heavily on anti-government media to push hard against the Ottawa’s plan to reduce farm nitrogen use by 20% and nitrous oxide emissions by 30% by 2030. The stakes are high, since nitrous is a climate super-pollutant with about 300 times the warming potential of carbon dioxide. One recent study found the use of nitrogen fertilizers has soared 800% since the 1960s.

Here’s How Most Media Coverage Got It Wrong

Others mischaracterized the protesters as small family farmers. In a Sky News Australia segment that aired early in July, host Rowan Dean declared that the European Union was imposing “arbitrarily-decided” nitrogen pollution limits on Dutch “mum and dad” farms.

Several more media outlets sparked fears of a food crisis, reporting that the regulations could set off a global shortage. In Legal Insurrection, one contributor wrote that “anyone who likes to eat regularly should be deeply concerned about the load of regulatory nonsense that has just been dumped on Dutch agriculture.” Australia’s Sky News co-host James Morrow warned that the global pursuit of net-zero is going to hurt food production.

“Change course now before we hit the iceberg,” he warned Australian policy-makers.

Some right wing ideologues are using the protest as an opening to spread anti-immigrant misinformation. Fox News host Tucker Carlson interviewed Dutch commentator Eva Vlaardingerbroek, who said the country’s government is stealing the farmers’ land “under the guise of a made-up nitrogen crisis” because “they want it to house new immigrants.”

These stories and opinion pieces all repeat myths that could further delay climate action, myths that are now being exploited and amplified by right-wing commentators to the benefit of the Dutch livestock industry.

Emissions Still Too High Despite Years of Innovation

Regardless of the efficiency of the Dutch animal farming system, the Netherlands has an ongoing pollution problem. The country has the highest density of farmed animals in Europe and, until this summer, was exempt from EU rules limiting the amount of manure that farmers can spread on the land. In 2021, there were 3.8 million cows, 11 million pigs, and almost 100 million chickens. Because of the huge amounts of feces and urine these animals produce, intensive animal farms account for almost half of the country’s nitrogen pollution problem.

For years, the government and big meat producers encouraged farmers to invest in techno-fixes to bring down emissions, such as installing air scrubbers in pig and poultry barns. To some extent, these fixes worked, bringing down ammonia levels by 66% since 1990. But both ammonia and nitrogen concentrations remain too high.

Nitrogen levels across the country’s many ecosystems exceed limits set by the EU Nitrates Directive, defined as more than 50 milligrams of nitrogen per litre of water, whether groundwater, coastal waters, or surface freshwaters that could be used for drinking water, among other waterways. Out of 162 Dutch nature reserves, 118 now have excessive nitrogen levels, primarily due to animal farming.

The new Dutch climate targets aim to draw down those emissions and bring them in line with the European Union’s pollution targets.

Eight major agribusiness companies have financial interests in preserving the status quo in the Dutch livestock industry — the feed companies Van Heus, For Farmers, and AgriFirm, meat producers Vion, Van Drie Group, and Plukon, as well as Friesland Campina, a dairy company. Lobbying from these companies has helped keep the livestock sector mostly off the hook for its high emissions, while AgriFirm has been financially supporting the farmer protests, according to the Dutch news site NOS.

Rabobank, the largest financier of farmers in the Netherlands, also has high stakes in the conflict. Many Dutch livestock farmers are in debt to Rabobank, so a chunk of the €25 billion the government has earmarked for the transition will end up going to the bank. Labor Party MP Joris Thijssen has urged Rabobank to write off part of the loans to farmers who will have to cease farming, but the company has refused.

That these corporate interests rarely feature in the news is no mistake, Mechielsen told Sentient Media.

The Mighty Eight try to be invisible because the more it is seen as a farmer protest and not the big industry behind it, the better,” he said. “And it isn’t fair for the farmers because they are kind of the victim of those bigger players who gained so much money over the past 20, 30 years, or more.”

Reports of a threatened food crisis miss the point that the countries importing Dutch meat and milk consume far more than is recommended to draw down emissions. The main recipients of meat from the Netherlands are Germany, the United Kingdom, and China. Almost 75% of milk processed in the Netherlands goes to countries in Europe. Yet affluent countries, especially those in the global north, consume too much meat and dairy, according to a report published last year.

The notion that lowering livestock numbers in the Netherlands will cause a global food crisis is ridiculous, said Mechielsen. The country overproduces fertilizers, as much of its agricultural system is devoted to intensive livestock farms. Dutch maize production is one example.

“It’s mainly a crop to absorb the manure from all those intensive livestock farms,” Mechielsen explained. “And of course, then, the maize can be fed again to those cattle.” The Netherlands used to grow more grain for human consumption, such as rye, he added. Now it depends on grain imports to feed its local population.

During a workshop hosted by food advocacy organizations IPES-Food and A Growing Culture in June, food researcher Raj Patel explained that the current food crisis is more accurately defined as a price crisis. “This is not a simple story of ‘Oh my goodness, there’s just not enough food to go around,” Patel said. “There are plenty of calories being pulled from the earth this year. The food crisis is a crisis of affordability, a crisis of poverty, a crisis of debt.”

Food and climate writer Thin Lei Win urged journalists not to amplify the argument that the world needs to produce more food at all costs. “Availability is not yet an issue,” Lei Win explained, though she cautioned, “with climate change, it might become one.”

Reporting on the housing crisis in the Netherlands has also left out important information that connects back to nitrogen emissions. In 2019, the country’s highest administrative court ruled that the Dutch strategy for reducing excess nitrogen in vulnerable natural areas conflicted with EU law. As a result, the government suspended permits for housing projects that cause nitrogen pollution, which affected around 18,000 building projects nationwide.

Even though the 2019 decision sparked a nation-wide housing crisis, Dutch lawmakers aren’t offering up animal farms as a solution. Some 54% of land in the Netherlands is used for agriculture, with 70% of that share dedicated to animal farming. The government has proposed building one million new homes, but that is estimated to take up just 1% of national land. Meanwhile, government proposals to convert farmland are primarily recommendations to rewild for nature conservation or less intensive ways of farming.

The media needs to acknowledge that the Dutch farmer protests are not a simple tale of ‘the people’ resisting an uncaring regime, Sentient Media says. In reality, many farmers are caught between a government belatedly trying to tackle serious environmental problems and powerful agribusinesses blocking climate action.

“It is very important to scrutinize much more who is behind the protests; what are the interests of the big industry,” said Mechielsen. “That’s why I called these big feed, meat, and finance companies the Mighty Eight. They are the ones who really have made such a profit, and they should pay for the transition.”

A majority in the Dutch House of Representatives recently passed a motion requiring big agribusinesses to contribute. “They have made billions from a sector that they have known for a long time that it cannot continue like this,” said MP Joris Thijssen, urging the industry to start investing in climate action.

Following the Dutch protests, farmers in Germany, Poland, Italy, and Spain also took to the streets, fearing their governments would follow the lead set by Dutch lawmakers.

Yet the new Dutch climate plan follows urgent recommendations based on the latest climate models. According to the Intergovernmental Panel on Climate Change’s (IPCC) most recent report, a switch to plant-based diets is the most impactful behaviour change to make for slashing emissions.

The evidence for these recommendations is clear. A 2020 study in the journal Nature estimated that the livestock sector generates one-third of anthropogenic nitrogen emissions. The researchers found that less concentrated systems that integrate livestock and feed regionally could help tackle the pollution. The authors added that in some parts of the world, a reduction in the production of animal products may be needed to keep global nitrogen emissions within planetary boundaries.

As one of the first countries with ambitious nitrogen reduction goals, the Netherlands serves as a critical example of the challenges involved in downscaling the livestock sector. To help pave the way for this much-needed transition, governments and media outlets need to better understand and address the reasons for food crises, the positions of farmers and, maybe most importantly, the role of Big Ag companies.

This story originally appeared in Sentient Media and is part of Covering Climate Now, a global journalism collaboration strengthening coverage of the climate story.