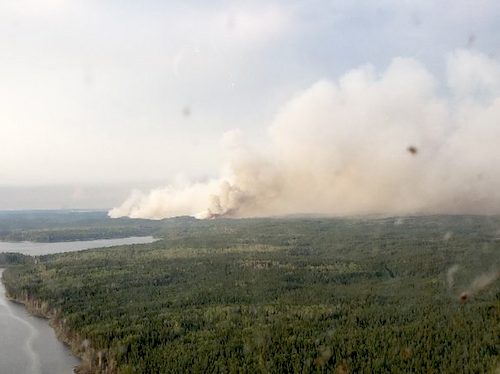 A Canadian Red Cross official in Manitoba estimates close to 2,000 people have been evacuated from a First Nation threatened by a wildfire over the last several days using planes, helicopters, and trains.

Jason Small said fewer than 30 people remained at the Mathias Colomb Cree Nation in northwestern Manitoba on Sunday, most of them community leaders and emergency support workers, The Canadian Press reports.

There are two ways out of the community at this time of year—by air or by train—and Small estimated about 650 were brought out by planes and helicopters organized by the Red Cross and community leaders as part of an emergency response agreement with Indigenous Services Canada.

Many others, though, got out on Keewatin Railway Company trains organized by the community and the railway, which is owned by three partner First Nations that bought it nearly 20 years ago.

Small says evacuees are now in Winnipeg, Brandon, and Thompson, where they’re staying in hotels or with family.

The Manitoba government said Sunday the fire was approximately 23,000 hectares in size and burning less than a kilometre from Pukatawagan, a community on the First Nation.

“It is my expectation everybody will be out by the end of the day,” Small said Sunday afternoon.

The Keewatin Railway is a 300-kilometre-long subdivision running between Sherritt Junction and Lynn Lake, Manitoba. According to its website, it operates two round trips per week carrying freight and passengers between Pukatawagan and The Pas.

Small said the Red Cross worked with the Mathias Colomb Cree Nation to have buses meet the evacuees at the railway station in Sherridon, Manitoba, which then carried them to The Pas, where the Opaskwayak Cree Nation set up a staging area.

From The Pas, Small said they were flown to cities in the south.

“We have stood up a shelter at the University of Winnipeg. We got it set up yesterday and it’s ready to go. That being said, we do not need it at the moment,” Small said.

“If our hotel capacity is exceeded then we will be required to use the shelter.”

The province said in an email Sunday that work continued to keep the community safe and protect important infrastructure.

“Additional firefighting resources have been put in place in the community to support the local fire department and respond to any new starts or flying embers,” the government email said.

It also noted four single-engine water bombers and a spotter plane from the Northwest Territories, as well as 20 firefighters from Ontario, were to arrive in Manitoba on Sunday to help battle fires in the province’s northwest.

Small said donations were not needed since the federal government was covering supply costs, but he said the Red Cross always wants to hear from volunteers.

“We may not get everybody who volunteers up to speed for this response, but there’s always future responses where people can help,” Small said.

This report by The Canadian Press was first published July 17, 2022.