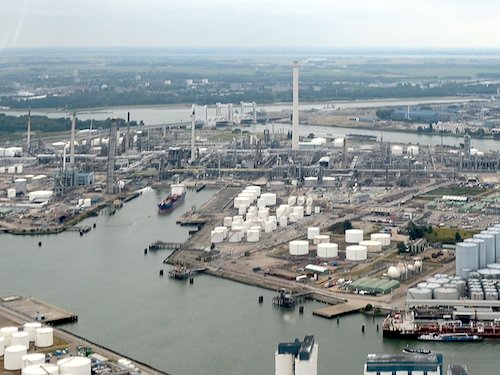 Shell has revealed plans to build a 200-megawatt renewable hydrogen plant in the Netherlands—and to use that green fuel to power its production of petrol, diesel, and jet fuel—as the company continues to invest heavily in oil and gas development worldwide.

“The irony of building enormous capacity in renewable and zero-carbon energy, only to use them in producing fossil fuels, highlights the conflicting motives of oil companies like Shell as they attempt to assert their place in the clean energy transition,” writes Quartz.

Shell says its planned Holland Hydrogen I plant in Rotterdam, expected to be operational in 2025, will be the biggest of its kind in Europe, though several larger hydrogen plants are scheduled to come online that same year, says RechargeNews. Holland Hydrogen I will be powered by the Hollandse Kust offshore wind farm, which is partly owned by Shell, and will produce up to 60,000 kilograms of “green hydrogen” daily. The renewable hydrogen will partially replace the “grey hydrogen” currently used in the Rotterdam refinery.

Unlike green hydrogen, which is produced using renewable energy like wind, grey hydrogen is derived from natural gas and emits eight to 12 kilograms of carbon dioxide per kilo of hydrogen, creating two to six times more emissions than burning fossil fuels directly, Quartz says. Similarly, blue hydrogen is produced from natural gas, but includes a carbon capture mechanism aimed at reducing emissions by about 12%. Shell’s partial shift to green hydrogen will help the company cut back its hydrogen production emissions.

Anna Mascolo, Shell’s executive vice president for emerging energy solutions, said the decision to build the new facility “demonstrates how new energy solutions can work together to meet society’s need for cleaner energy.” She called it “another example of Shell’s own efforts and commitment to become a net-zero emissions business by 2050.”

But Quartz summarizes it as simply “making dirty fuels in a cleaner way,” owing to the facility’s ultimate purpose.

Shell is moving ahead with the hydrogen project despite an uncertain regulatory future and without any subsidies in place, which makes the decision a risky investment. The company says it plans to build many more large-scale hydrogen facilities like Holland Hydrogen I and expects to fill at least 10% of the future global market, writes RechargeNews.

But regardless of those future plans, or whether using renewable energy to produce non-renewable fuel is an effective step to net-zero, Shell “continues to invest billions into oil and gas extraction, including a new offshore rig it will be towing this month into the Gulf of Mexico to begin pumping oil from eight new wells,” Quartz says, “an investment that leaves little doubt about the company’s priorities.”