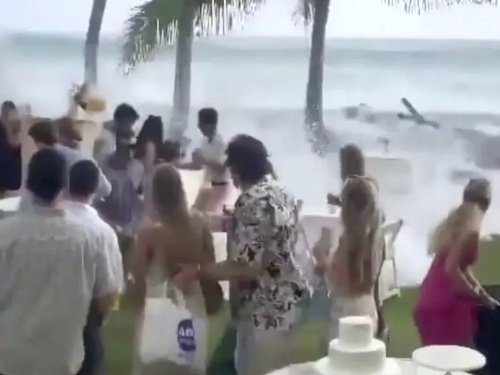 A massive surf swell sent waves crashing into a wedding reception in Hawaii last week, reminding residents of the profound threat that sea level rise poses to the Aloha State.

The monster swell on the Big Island’s southwest coast that made waves on social media—as an unwelcome guest that sent a wedding party running for higher ground—was a harbinger of far worse to come, reports The Independent.

While high surf swell is hardly an anomaly in the middle of the Pacific, sea level rise driven by climate change stands to turn those waves into vectors for flooding that do more than take out a few reception tables.

Citing a 2018 analysis by the state of Hawaii, The Independent writes that with 3.2 feet (roughly one metre) of sea level rise, “vast swaths of Honolulu are going to sit in the coastal flood hazard zone—with many low-lying areas flooding annually when big waves hit.”

That degree of sea level rise matches up with NASA projections that even “under the lowest possible emissions scenario,” the sea will have risen by “at least 2.7 feet” (0.82 metres) by 2150, The Independent says.

With even a moderate degree of sea level rise, the state analysis projects that “around 20,000 people will need new homes,” while “many of the island chain’s iconic beaches could erode.”

Such projected losses are already presenting tragedy to places like the Maldives, The Independent writes, noting that the republic’s islands in the Indian Ocean “are facing immense losses of land as sea level rise eats up their low-lying coasts.”