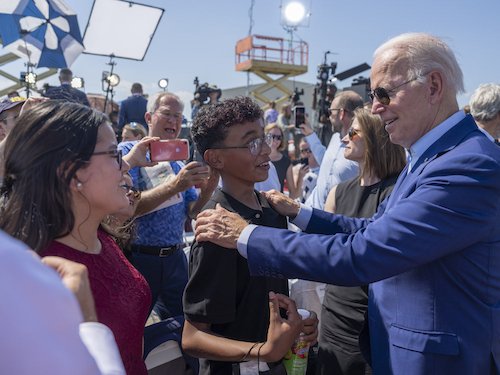 U.S. President Joe Biden visited a former coal plant in Massachusetts yesterday to announce new areas for offshore wind farms, funding for home energy subsidies, and support for communities facing heat emergencies and other climate impacts. But he fell short of declaring a full-scale climate emergency, keeping a door open instead for an accommodation with renegade Senator Joe Manchin (D-WV).

Biden called climate change an “emergency”, a “clear and present danger”, and an “existential threat”, according to news reports, but did not issue a formal emergency declaration.

“With his environmental agenda in tatters on Capitol Hill,” the Washington Post reports, Biden had been on track “to deliver an ultimatum on climate change: If Congress does not act to combat a fast-warming planet, then the White House will tap its own powers to respond to the crisis.”

But so far, the emergency powers that would unlock billions of dollars in climate and clean energy investment and restrict fossil fuels are still one step away, Bloomberg writes.

“The president is under pressure to meet his campaign promises of aggressive action against climate change without also alienating Manchin, a moderate Democrat whose vote is critical in the evenly divided Senate,” Bloomberg explains. “The West Virginia lawmaker both represents a coal state and draws much of his own personal wealth from the industry.”

Biden’s Massachusetts visit “is all about him making the case not just to shift away from the fossil fuels of the past, but to look at the opportunities across the country that are growing,” White House National Climate Advisor Gina McCarthy said yesterday. But it was a pale imitation of the transformative plan he first brought to the White House in January, 2021.

“Biden said his commitments today are merely the start. But they still fall short of what climate scientists say is necessary to make a meaningful dent in the nation’s carbon pollution,” Politico Power Switch writes. “Deploying 30 gigawatts of offshore wind by decade’s end—which would increase current commercial capacity a thousandfold—is still a far cry from the zero-carbon electricity system Biden pledged to achieve by 2035.”

The attempt at a balancing act didn’t sit well with the U.S. climate community on the day when Climate Central’s Realtime Fingerprints program reported climate change making daytime high temperatures twice as likely in Boston, New York City, and Portland, Maine, and three times as likely in Houston. The climate fingerprint on overnight lows was expected to be even stronger in Los Angeles, San Francisco, Boston, New York, and Washington, DC.

“We appreciate that Biden feels like the climate crisis is an emergency,” 350.org Senior Policy Campaigner and Policy Analyst JL Andrepont said in a release. “What is needed right now is not more words, but action. He needs to shut down the fossil fuel industry, not support false solutions like tech-based carbon capture, which is just another giveaway to the fossil fuel industry. Every day the President waits to stop all new fossil fuel extraction projects in the U.S. is another day lost and will cause temperatures to rise even higher, costing even more lives.”

The Indigenous Environmental Network urged supporters to flood White House phone lines with calls [the number is 888-431-7599, and you know what to do—Ed.] until Biden declares a climate emergency and stops approving fossil fuel leases, exports, and infrastructure.

After Manchin’s dramatic and unexpected moves last week to undercut Biden’s climate agenda after more than a year of on-again, off-again negotiations, Democrats in Congress were poised for the White House to go into “beast mode” and address the climate emergency through a series of executive orders.

“Right now you’ve got Europe on fire, record temperatures in Great Britain,” said Senate Environment and Public Works Committee Chair Tom Carper (D-DE), at a Tuesday lunch meeting of Senate Democrats where Manchin was a no-show. “They’re trying to have the Tour de France and they’re having problems keeping enough water to keep people going.” And “we’re here talking about not doing climate before the end of this session. I think that’s an incredible mistake.”

After talks with Manchin collapsed, Biden vowed he wouldn’t back down.

“My actions will create jobs, improve our energy security, bolster domestic manufacturing and supply chains, protect us from oil and gas price hikes in the future, and address climate change,” he said last Friday. “The opportunity to create jobs and build a clean energy future is too important to relent.”

But less than a week later, while “administration officials continue to study an emergency declaration,” Bloomberg says, the White House still “hopes to retain Manchin’s support for an important health care bill that would lower costs for both prescription drugs and Obamacare insurance plans before midterm elections in November.” So a climate emergency declaration is apparently unlikely anytime soon.

“Two of the individuals familiar with the president’s thinking said they expected additional climate-related announcements on the horizon in the weeks ahead,” the Post reports. “Still, the new directives are likely to amount to a marked departure from the more than US$500 billion that Democrats initially sought as part of their ill-fated proposal, known as the Build Back Better Act. The sum would have been historic, as party lawmakers looked to leverage their rare control of the House, Senate, and White House to secure more than the United States has ever spent in a single burst to protect and improve the environment.”

But then Manchin slowly, steadily dismantled that plan through a sequence of fruitless negotiations in which he “coaxed the President to strip the sticks from the Build Back Better bill which would have forced utilities toward clean energy, and then nibbled away at the carrots,” wrote veteran climate journalist and 350.og co-founder Bill McKibben, in the aftermath of the West Virginia senator’s betrayal.

If Biden did eventually issue a climate emergency order, the move “would unlock broad executive powers to propel clean energy construction, restrict oil drilling, and curb fossil fuel flows,” Bloomberg writes. It would “steer aid to communities on the front lines of climate change and even curb the export of the fossil fuels driving global warming.”

The news agency points to the 2019 precedent Biden would be building on: during his four-year occupation of the White House, Donald Trump “used a similar tactic to divert billions of dollars to begin construction of a border wall after Congress refused to appropriate the funding.”