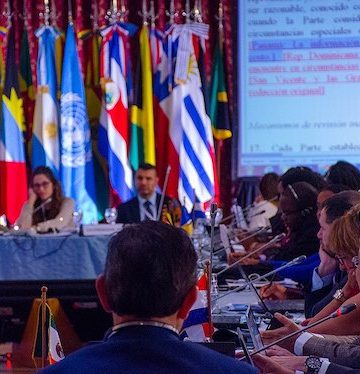 The United Nations Permanent Forum on Indigenous Issues (UNPFII) is urging its member states to support the Escazú Agreement following the release of its final report last month, though some say there’s a lack of political will to implement the world’s first legally binding instrument to include provisions on environmental human rights defenders.

“Without proper implementation there won’t be justice,” Patricia Gualinga, a Kichwa leader from Sarayaku, Ecuador and a spokeswoman for Amazonian Women, told Grist.

The Escazú Agreement was first signed in 2018 and is the first of its kind to incorporate Indigenous environmental perspectives. Twelve of the original 24 signatory countries have since ratified the agreement, and it entered into force in April 2021, reports Grist.

At the Permanent Forum’s annual meeting in the spring, newly-elected Chair Darío José Mejía Montalvo emphasized the agreement’s importance after drawing attention to the critical role of Indigenous peoples in global climate action.

“Recall that in combating climate change, Indigenous people are mainstays,” Montalvo said. “This is not a fashion, not motivated by needs and trends on social networks, it’s our way of life. We value and respect all efforts to protect the planet.”

By including provisions for protecting human rights defenders, the Escazú Agreement seeks to address human rights abuses, widespread attacks, and killings that threaten land defenders and Indigenous peoples. Some 99 land defenders have already been killed in Colombia this year, roughly one-third of them Indigenous or Afro-descendant.

“Many Indigenous communities are attacked and displaced, forced to leave their territories due to legal and illegal extractive projects,” Grist writes.

But during a side event at the first Conference of the Parties to Escazú, women participants voiced lingering concerns that a “lack of political will” at the national and international levels would undermine the agreement’s impact on threats widely faced by female land defenders.

“We need to use this lever as much as we can to protect defenders of land and women who are putting their bodies on the line to protect biodiverse areas,” said Osprey Orielle Lake, executive director of WECAN, the organization that hosted the virtual side event. Lake said entrenched colonial and patriarchal systems will make it difficult for this “unique and transformative agreement” to provide a promising path forward, Grist writes.