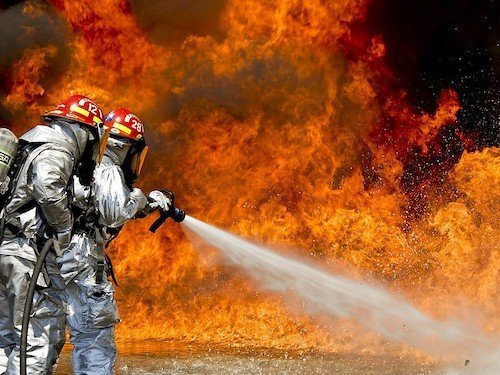 Hundreds are dead from heat-related causes, tens of thousands are displaced by raging wildfires, and global food security is yet further threatened as vast swathes of western Europe, North Africa, and China continue to suffer in the grip of lethal heat.

“The coming days in Europe are likely to see one of the continent’s most extreme climate disasters,” writes Politico Europe’s Karl Mathiesen in an extensive and ongoing Twitter thread covering the unfolding heat crisis.

Anticipating temperatures hitting, and perhaps even exceeding, 40°C across the UK as the week begins, the Met Office and the UK Health Security Agency have issued the country’s first-ever national red alert for heat. Met Office CEO Penny Endersby issued a “sombre” plea via video, warning the public against regarding the upcoming extreme heat event as “a chance to go play in the sun.”

“This is not that sort of weather,” Endersby said, urging residents to understand that UK infrastructure is “not adapted to what is coming” and to “treat the warnings we are putting out as seriously as you would a red or amber warning from us for wind or snow and follow the advice.”

In a public statement, Cabinet Office minister Kit Malthouse also pleaded with the public to act on the knowledge that “the first line of defence is actually individual behavioural change.” Malthouse urged all UK residents to do whatever they can to keep cool and hydrated, while keeping an eye out for distress amongst those most vulnerable to heat: the elderly, the sick, the disabled, and children.

Such pleas come as new COVID-related staff absences at UK hospitals continue to skyrocket, having risen 30% between the end of June and the first week of July, adds The Guardian. Meanwhile railroad companies are warning passengers that the extreme heat could lead to delays or outright cancellations, as tracks will bend or even buckle in the forecasted temperatures, reports the Independent.

Vast expanses of southern Europe and North Africa are likewise being seared by off-the-charts temperatures, with Spain, Portugal, France, Greece, Morocco, and Algeria particularly hard-hit. In many districts made tinder-dry by ongoing drought conditions, wildfires are currently burning out of control, with the Independent reporting thousands forced to flee their homes ahead of raging flames.

The UK’s Metro shared images of terrified nursing home residents being evacuated from a smoke-filled village near Lisbon. The BBC carried footage of frightened Moroccans seeking refuge from heat and smoke in their cars.

Since July 13, more than half of Portugal has been on red alert for fire risk, reports NASA’s Earth Observatory, with one town on the front lines of a wildfire reporting an unheard of temperature of 45°C. Since late June, 96% of the country has been classified as being in either “severe” or “extreme” drought, writes The Associated Press.

In latest news, the Guardian reports that the pan-European battle against wildfires currently raging across “tens of thousands of hectares” has “claimed the lives of a number of personnel, from a pilot killed when his plane crashed in northern Portugal to two who died in Greece when their helicopter fell into the sea.”

The Guardian writes that the heat killed 360 people between last Sunday and Friday in Spain, with 123 deaths in one day alone. Amongst the dead is a 60-year-old street cleaner who collapsed while working in Madrid on Friday. “His body temperature when he was discovered was 41.6°C,” writes Mathiesen.

In Portugal, the numbers are even higher—so far 659 people, mostly elderly, have died from heat stress, writes the BBC.

In North Africa, the BBC reports one person dead from burns in Morocco, and “at least 90 people” killed whilst fighting forest fires in Algeria, a mortality rate “far higher than ever seen before.”

Citing early assessments, the BBC adds it appears that “this year’s fires inflicted more damage to Algeria’s forests than all the fires from 2008 to 2020 combined.”

As much of Western Europe and North Africa struggle through never-before-seen heat that is expected to worsen, more than half of China is hoping for a degree of relief from its own cauldron summer, reports Bloomberg. Temperatures are expected to drop this week—too little, too late for patients reportedly dead from heatstroke in hospitals around the country.

The heat has been such that authorities have begun to curtail power to textile factories, an effort to ensure enough power for air conditioning for the 900 million people in China currently at risk from extreme heat.

High temperatures in Europe and Asia will also have an impact on global food security, writes Grist. That Italy is now expected to lose a minimum of 30% of its rice, corn, and animal feed crops this year, and the European Commission “recently downgraded its soft-wheat harvest estimates from 130 to 125 million tons,” is “more bad news amid a food shortage precipitated by Russia’s blockade on exports from Ukraine.”

“Extreme weather is a grim reminder of the dangers of delaying climate action. It shows that efforts to hang on to the status quo are not an option,” writes Bloomberg. Yet European countries, reeling from the energy fallout that has accompanied Russia’s war on Ukraine, continue to ramp up short-term coal and natural gas infrastructure, even as they fry in temperatures brought about by anthropogenic climate change.

“We have followed a rationale in the fight against climate change which is that we will always find ways to keep going with business as usual and that the global economy doesn’t need to change,” said Olivia Lazard, a visiting scholar at Carnegie Europe focusing on the geopolitics of climate.

“Year 2022 is the year when this myth is debunked because we’re going to face so many compound shocks,” she added.

Still with myths, last week’s response to ongoing extreme heat and consequent power shortages in Texas were undercut by repeated efforts by regulators to blame the shortfall on underperforming renewables, reports Inside Climate News.

The Electric Reliability Council of Texas (ERCOT) issued two separate appeals for conservation last week, Inside Climate writes, and both times claimed that poor renewable performance, thanks to low wind speeds and cloudy skies, were the root of the problem.

While wind output did drop, gas and coal outages that were at one point “60% greater than ERCOT had anticipated in its summer Seasonal Assessment of Resource Adequacy,” according to energy analyst and Stoic Energy President Doug Lewin.

Concurring that such thermal outages are “definitely a big issue,” GridLab Executive Director Ric O’Connell told Utility Dive that last week’s roiling of Texas’ power supply “shows that the thermal fleet is not as reliable as people would have you think.”

By contrast, he added, “renewables are meeting the forecast,” holding “well within the boundaries” of the regulator’s seasonal assessment.

Emerging as a clear “triumph” in Texas’ ultimately successful battle to avoid blackouts last week was the power of “collaborative, voluntary energy conservation,” Inside Climate adds. “Residents were able to conserve around 500 megawatts of energy, enough to power 100,000 homes, by lowering their energy use. Businesses preserved even more energy when they followed suit.”