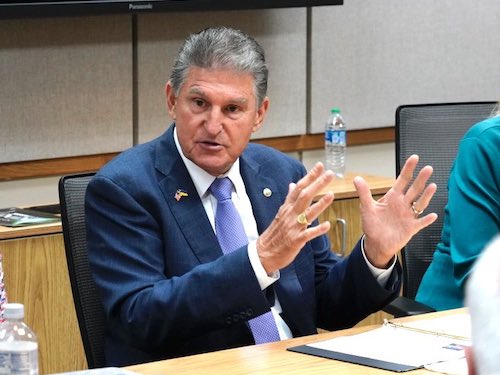 “President Biden bowed to political reality on Friday, conceding that he had been unable to persuade a holdout coal-state Democrat, or any Republicans in the Senate, to back legislation that had been his greatest hope to confront the climate crisis,” the New York Times reports. “The move effectively dooms his quest for a major climate change law, and his accompanying plans to raise taxes on businesses and high-earning individuals, unless Democrats hold the House and Senate in November’s midterm elections.”

After more than a year of fruitless negotiations in which he “coaxed the President to strip the sticks from the Build Back Better bill which would have forced utilities toward clean energy, and then nibbled away at the carrots,” Manchin said he would “unequivocally” reject any spending bill that includes provisions to decarbonize the country’s electricity production, Politico Power Switch writes. Now, Biden has just weeks to get done whatever he can before legislators shift all their attention to campaigning for the midterm vote November 8.

On Friday, Manchin was still insisting he might return to negotiations. But Biden was wisely, finally signalling that he aims to get something done. “I am not going away” on the climate fight, the U.S. president vowed, at the end of a news conference in Jeddah, Saudi Arabia. “I will use every power that I have as president to continue to fulfill my pledge toward dealing with global warming,”

But Manchin’s epic betrayal “has effectively stalled Mr. Biden’s economic package in the evenly divided Senate, and dealt a devastating blow to his party’s efforts to enact a broad social safety net, climate, and tax package,” the Times writes. “In rejecting any climate and energy provisions, Mr. Manchin appeared to have single-handedly shattered Mr. Biden’s ambitious climate agenda and what would have been the largest single federal investment in American history toward addressing the toll of climate change.”

“I struggle to contemplate what single elected official in American history will do more to cause more massive suffering,” said Evergreen Action co-founder and co-director Sam Ricketts. “There’s numerous examples, but if you want to look decades out from now, this decision by this one senator from West Virginia is going to have repercussions that affect millions, if not billions.”

With no prospect of a deal as long as Manchin holds the deciding vote, the U.S. president said Friday he was prepared to “take strong executive action to meet this moment.” And some Democratic senators were urging him to do exactly that.

“It is time for the executive branch to take action on climate,” agreed Sen. Brian Schatz (D-HI), who’s previously been less enthusiastic about having the White House take the initiative.

Climate hawks outside Congress are pushing Biden to declare a national climate emergency—ironically, building on a precedent that Donald Trump set in 2019. “While not a silver bullet, the move would unlock billions of dollars annually to fund a clean energy revolution and protect the most vulnerable from the impacts of climate change,” Politico writes.

“This is kind of a put up or shut up moment for Biden,” said Collin Rees, U.S. program manager at Oil Change International.

But Biden’s recent efforts to drive up U.S. oil production in response to Russia’s invasion of Ukraine have “not exactly inspired confidence from climate advocates,” Politico adds.

“Biden is about to do what every president before him has done on climate: nothing,” tweeted Will Cleveland, senior attorney at the Southern Environmental Law Center. “It’s up to states for the foreseeable future.”

Joe Biden entered the White House in January 2021 “promising to wean the United States from fossil fuels like oil and coal in order to reduce the greenhouse gas emissions that are on pace to trigger catastrophic global warming,” the Times recalls. And his early moves indicated a degree of seriousness to get that work done.

“He surrounded himself with experienced and aggressive advisors on international and domestic climate politics. He cast himself as a master negotiator who had spent nearly four decades in the Senate and could build coalitions on big legislation.”

Last week, the word was that the latest round of negotiations with Manchin was going well, and as recently as Thursday, officials close to Senate Majority Leader Charles Schumer (D-NY) thought they were close to a deal.

“But by nightfall, Mr. Manchin told them he could not support roughly US$300 billion in tax incentives for clean energy like solar and wind power,” the Times writes. “He said he wanted to wait for more encouraging data on inflation, even though administration officials said the clean energy provisions would be part of a broader bill designed to reduce health and electricity costs, cut the deficit, and strengthen the economy. It was the coda to more than a year of tortured negotiations.”

Schumer aides were reportedly “shellshocked” by the outcome.

In an opinion piece for the Times, University of California, Santa Barbara political scientist Leah Stokes dissects Manchin’s behaviour, as she says she’s been doing with his “every remark” for the last 18 months.

“It’s now clear that Mr. Manchin has wasted what little time this Congress had left to make real progress on the climate crisis,” Stokes writes. “By stringing his colleagues along, Mr. Manchin didn’t just waste legislators’ time. He also delayed crucial regulations that would cut carbon pollution. Wary of upsetting the delicate negotiations, the Biden administration has held back on using the full force of its executive authority on climate over the past 18 months, likely in hopes of securing legislation first.”

The “stakes of delay could not be higher,” Stokes adds, and the losses are immense. Incentives and supports for solar, wind, and electric vehicles “were essential to meeting President Biden’s goal of cutting carbon pollution in half from its 2005 levels by 2030—the United States’ contribution to limiting global warming to 1.5°C. Congress’s failure to act means that, under the best case scenario with the policies we already have in place, we will only get 70% of the way there.”

A ‘Walking Conflict of Interest’

The collapse of the Biden clean energy plan had U.S. climate hawks and news outlets pointing to the astonishing political baggage Manchin brings to his job.

“Manchin is a walking conflict of interest,” Public Citizen campaign finance lobbyist Craig Holman told CNN. “And what makes it all the more troubling is that he’s the 50th Democratic senator, which gives him enormous sway over climate change policy.”

Manchin “had holdings in 2021 valued at between $1 and $5 million in Enersystems, Inc., the coal brokerage business he founded,” CNN writes, citing recent financial disclosures. “In 2021, he made more than $536,000 from his Enersystems holdings, the filings show. That’s more than three times his $174,000 annual Senate salary.”

The West Virginia senator has also “taken more money from the oil and gas industry than any other member of Congress—including every Republican,” Stokes says. “Coal has made Mr. Manchin a millionaire, even as it has poisoned the air his own constituents in West Virginia breathe.”

Yet the Biden plan was all set to deliver what Manchin said he wanted—and his “refusal to agree to climate investments will hurt the economy he claims he wants to protect,” she adds. “The package would have built domestic manufacturing, supporting more than 750,000 climate jobs annually. It would have also fought inflation, helping to make energy bills more affordable for everyday Americans. This is particularly ironic since Mr. Manchin said inflation was the chief reason he was uncomfortable with supporting tax incentives for clean energy right now.”

Stokes says she has trouble imagining how Manchin will answer to the people in his life who might matter even more to him than his campaign donors and his business bottom line. “One thing I have never understood about Mr. Manchin is how he looks his grandchildren in the eye,” she writes. “While he may leave his descendants plenty of money, they will also inherit a broken planet. Like other young people, Mr. Manchin’s grandchildren will grow up knowing that his legacy is climate destruction.”

The Levers for U.S. Climate Action

For U.S. climate hawks, “the news comes just two weeks after the Supreme Court curbed the Environmental Protection Agency’s power to regulate greenhouse gases from power plants, and as the Biden administration’s climate strategy has taken a back seat to efforts to ramp up oil and gas production to fend off inflation,” Politico writes. “The upshot is that the United States, the world’s No. 2 producer of greenhouse gas pollution, may find itself with little ability to address the problem—even after the Democrats who [ostensibly, theoretically—Ed.] control the White House and Congress declared it one of their highest priorities.”

In her New York Times opinion piece, Stokes lists the levers still available effective climate action. That list begins with “49 Senators and hundreds of representatives who understand the gravity of this moment,” she writes. “If more Democrats are elected this fall, especially to the Senate, we may find ourselves with a window for federal climate legislation next year.”

Meanwhile, states like California, New York, and Washington are doing their part, and individuals can make their own moves—with electric vehicles “now cheaper to own than gas cars, from day one,” affordable e-bikes widely available and fun to use, and a menu of technologies to help people decarbonize their homes.

And still with individual action, Bill Nye the Science Guy recently became the latest public figure to identify voting as one of the most important actions to take on climate.

“To be sure, recycling the bottles, don’t throw the plastic away,” but “if you want to do one thing about climate change, vote,” he told the Aspen Ideas Festival two weeks ago, not long after the Supreme Court climate decision. “If you’re a kid and you can’t vote yet, make sure your parents vote,” and “don’t just vote for, with respect, dumb stuff. Vote for better laws to control climate change.”

But for now, Joe Manchin has New York Times climate correspondent Somini Sengupta declaring an “American climate failure”, with a senator from a state with just 1.8 million people using his “outsized leverage” to deliver a “a defeat for global efforts” to slow down climate change.

“Without swift emissions reductions by the United States, it seems virtually impossible for the world to limit the rise of global average temperatures,” she writes. “Failure to pass climate legislation takes away diplomatic leverage to press other countries to take climate action of their own,” including China as well as large and growing emitters like Brazil, India, and South Africa.

That reality had UK-based Climate Home News deliberately bypassing the U.S. news to focus its reporting this week on China. “Come back to us when you’ve achieved something, America!” wrote editor Megan Darby.