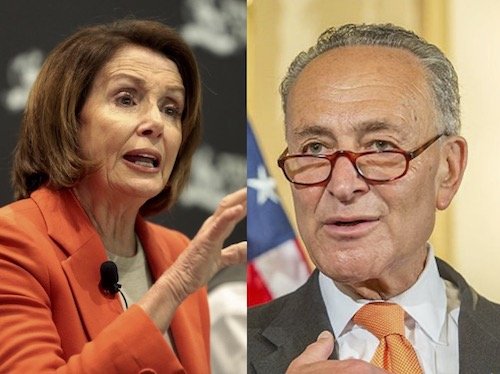 “We’ve crafted the legislation necessary to avert climate catastrophe. It’s time for you to pass it,” the staffers told Pelosi (D-CA) and Schumer (D-NY), in a Tuesday evening missive signed with their initials only. They warned that a failure to act by their much older employers could doom younger generations to more dire climate impacts.

Many of the staffers had been hard at work on ambitious climate policies long before Democrats took control of the House and Senate early last year, CNN says. “If we are already witnessing the consequences of inaction in your lifetime, we can scarcely imagine what we will face in ours,” the staffers told Pelosi, age 82, and Schumer, age 71.

“Our country is nearing the end of a two-year window that represents a once-in-a-generation opportunity to pass transformative climate policy,” they added, in a letter shared first with CNN. “The silence on expansive climate justice policy on Capitol Hill this year has been deafening. We write to distance ourselves from your dangerous inaction.”

With renegade Sen. Joe Manchin (D-WV, age 74) continuing to tie up the Biden administration’s climate package in endless rounds of renegotiation, the staffers’ letter caught on like wildfire. It first appeared Monday, and “by Tuesday, it had spread to many House and Senate offices, including offices in members’ home districts,” CNN says.

“This rose up out of staffers’ frustration,” he added. “A lot of people have worked on this bill for years, since before Joe Biden was elected. [The letter] represents immense frustration of people who are really close to power and did our job. How can we go home and tell our families we did our job this whole time and there’s no climate policy?”

CNN says anonymous letters from congressional staffers are rare. Neither Pelosi’s nor Schumer’s office responded to requests for comment.

“Our companies are proactively shifting to clean energy and investing in energy efficiency,” but “corporate action alone is insufficient to meet the scope and scale of the climate crisis,” the letter stated. “The federal government must reduce costs and climate-related risks across the economy and seize the economic opportunities in leading the world in clean energy innovation, manufacturing, and deployment.”