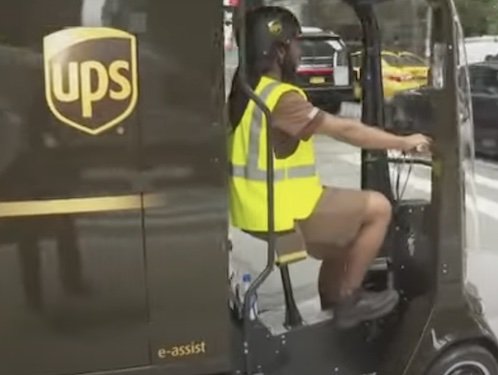 Coming soon to a bike lane near you: UPS’ “funny-looking” four-wheeled e-cycle.

Looking something like a giant chocolate box, up-ended on four wheels, with a plexiglass-protected seat for its rider, the battery- and leg-powered eQuad is garnering amused glances, and praise, during its trial runs in New York City and in several cities in Europe, reports The Associated Press.

Designed to haul cargo more efficiently through some of the world’s most congested cities, the eQuad is one part of UPS’s effort to reach carbon neutrality by 2050.

“The company now has a fleet of more than 1,000 electric vehicles and thousands more that aren’t powered by traditional gas engines,” writes AP.

Declaring the vehicle “cool stuff,” fellow New Yorker Mohammad Islam wished the pilot well. “Big trucks [are] always blocking the traffic,” he said, “so if they do that kind of stuff, it’s 10 times better for everybody.”

UPS industrial engineering director Nicole Pilet said the famously dense and complex city was a deliberate choice for an early pilot: If the eQuad can make it in New York, the company figures, it will make it anywhere.

As for how it feels to ride or drive the eQuad: “This is right in my wheelhouse,” said 22-year-old UPS delivery person and avid cyclist Dyghton Anderson, who rides it to and from work, roughly 19 kilometres each way from the Bronx to 43rd street.

“It’s pretty comfortable for me.”