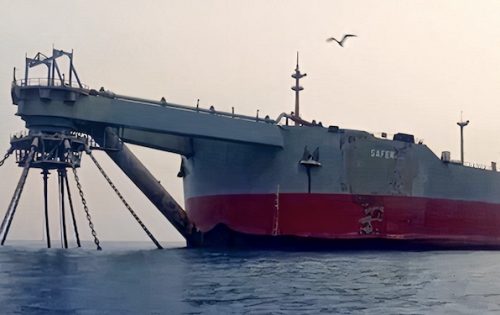 With a disabled oil supertanker in the Red Sea possibly just weeks or months away from breaking up or exploding, triggering a $20-billion ecological and humanitarian disaster, countries that could help pay for an emergency salvage plan are saying they can’t find the right budget codes to free up the funds.

Many of those donor countries could find the money in a heartbeat once the effort to salvage about 1.14 million barrels of oil from the rapidly-decaying FSO Safer had failed, The Energy Mix has learned. But the vessel’s condition is so dire, and the international response has been so slow, that the United Nations launched a crowdfunding campaign last month to help close a US$20-million gap on the $80 million needed for the “emergency phase” of unloading and removing the ship.

Now, the UN office in Sana’a, Yemen is in a race against the clock to get the three- to four-month salvage operation funded and launched. Funding delays have already pushed at least part of the operation into the season of high winds and currents that begins in October.

“That’s when the peak probability of a breakup takes place,” said David Gressly, the UN’s resident coordinator/ humanitarian coordinator for Yemen. “That’s why we’re pushing to get the funding now, so we don’t get into that period one more time.”

Faced with a “floating time bomb” carrying four times as much oil as the ill-fated Exxon Valdez, which ran aground in Alaska in 1989, “the one certainty we have is that if we don’t act, it will fall apart,” Gressly added. “This isn’t a question of a contingency. It’s only a question of when. It’s already been seven years without any maintenance, except for a small crew that lives on the vessel. They’re the ones keeping this thing afloat, doing all the emergency repairs they can, without the equipment or the skills to do major repairs. They’re doing what they can to keep the engine room clear of water so it doesn’t capsize. They’re taking the risk while the rest of us try to find the money to stop it.”

Another observer familiar with the ship and its condition said the six-member crew is holding the ship together “with band-aids and gaffer tape”.

But now, “technical reports indicate that it’s in its last stages,” Gressly said. “It’s difficult to predict when [the vessel will fail], it doesn’t have to be tomorrow or in the next six months, but it could be. It’s an any day kind of thing.”

An oil slick from the Safer would foul shorelines in Yemen, Eritrea, Saudi Arabia, and possibly beyond, devastate the “pristine” Red Sea ecosystem, and “wipe out 200,000 jobs in fisheries overnight in Yemen,” Gressly said. Fish stocks would take a couple of decades to recover.

“The $20 billion is just to clean it up, and it won’t be complete because you can never clean up an oil spill of this magnitude,” he said. “We estimate approximately 200,000 families will be affected by this, who would lose the ability to gain a livelihood or subsistence from the Red Sea.” Shipping traffic would be restricted or slowed down, affecting deliveries of food and other supplies in a region already facing severe famine.

In May, a pledging conference co-hosted by the Netherlands and the UN raised around $40 million towards the emergency phase of the operation, and Gressly said the current tally stands at $60 million. Which means potential donor countries must be having trouble with decimals as they try to come up with another $20 million to avert a $20-billion catastrophe.

“I will say I was surprised,” Gressly told The Mix. “But having talked to the potential donor countries, frankly they’ve all struggled to find the budgetary lines they could actually use. It seems everyone says if it’s a spill, we have a way to access money, but if it’s to prevent it, it’s hard, unfortunately.”

Major oil and shipping companies have also been approached, and some have offered technical support and advice. But The Mix has learned there is concern in executive suites about the reputational risk a big fossil would incur if it devoted dollars to a failed salvage operation.

Gressly said the Netherlands has led the way among donor countries with a contribution of €7.5 million and active outreach to other countries, while Germany and the United States have been active and helpful. “So we have allies,” he said. “It’s just to get that last leg done, and we really are looking to those member states that have yet to contribute to try to find a way.”

Ahead of the pledging conference in May, Global Affairs Canada said it had no plans to contribute. “Canada is not in a position to provide funding to support the salvage of the FSO Safer at this time,” a spokesperson told CBC News.

In an email nearly two months later, Global Affairs official Geneviève Tremblay told The Mix that “Canada continues to engage with the Netherlands on this initiative but no decision has been made at this time regarding participation or funding.”

Tremblay, the department’s international development spokesperson, did not answer questions on how Canada had weighed the cost of the salvage against the cost of an oil spill disaster, or on how officials had assessed the potential cost to Canada of a failure to complete the emergency operation in time—based on the added instability it would create in the region, the increase in food insecurity, and the almost certain increase in global migration numbers.

Nor did she comment on whether the lack of a usable budget line was the obstacle to Canada taking action.

Canada’s refusal to support the pledging conference in May has led to a change.org petition addressed to Prime Minister Justin Trudeau, Trade Minister Mary Ng, and Foreign Affairs Minister Mélanie Joly, calling for the country to “save the day by acting now”. The petition posted by the Greater Victoria Climate Hub, which originally aimed for 100 signatures, was approaching 500 as The Mix went to virtual press Wednesday evening.

1 Comment To "Time Running Out, Canada Hanging Back on Emergency Plan to Avert $20B Oil Spill Disaster"

We MUST. take this seriously!