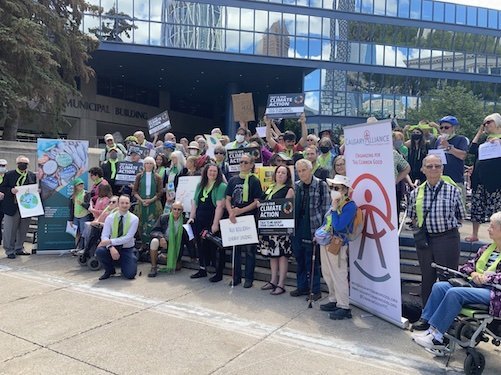 Two of Canada’s most influential cities stepped up this week with serious action on the climate emergency, with Calgary adopting a new emissions reduction strategy that includes a 2050 net-zero target and Ottawa endorsing the Fossil Fuel Non-Proliferation Treaty.

The Calgary strategy, adopted Tuesday on a 9-6 city council vote, “includes a mitigation plan to reduce emissions and an adaptation plan to help with the city’s resilience against more damaging weather events like the June, 2020, hailstorm,” Global News reports. It calls for all the city’s buildings and registered vehicles to produce net-zero emissions by 2050.

Then yesterday, Ottawa became the 12th Canadian municipality to support the Fossil Fuel Non-Proliferation Treaty, the treaty campaign said in a release.

“Endorsing the treaty sends a strong message that our city is serious about climate action and we remain committed to reducing our city-wide greenhouse gas emissions,” said Somerset Ward councillor and mayoral candidate Catherine McKenney. “Cities across the world are already feeling the effects of climate change, with Ottawa experiencing more frequent and significant flooding, hotter summers, and increased major storm events. Now is the time to reaffirm our commitment to move away from GHGs and transition to renewable energy.”

“Ottawa parents advocated strongly to their elected officials to endorse this treaty and our councillors listened and acted,” said For Our Kids Ottawa/Gatineau organizer Dr. Marianne Ariganello. “Having Ottawa agree to endorse the treaty and to push the Ontario government to accept this treaty is something we can happily share with our children as a success—advocacy works, it influences systemic change and action, our children do not need to feel they are fighting this climate battle alone, adults are standing up and taking action.”

In Calgary, the newly-adopted net-zero strategy is expected to cost C$87-billion, or $3.1 billion per year, to be covered by investments from the city, other levels of government, private businesses, and “actions from individual Calgarians,” Global writes. “Council heard inaction on climate change could yield a greater price tag in the future, with an estimated annual climate risk of $2.6 billion by 2050, growing to $8 billion per year by 2080.”

The city says the strategy would save taxpayers up to $80 billion and generate $60 billion in economic activity by 2050.

Mayor Jyoti Gondek said the strategy would trigger action by city staff to come back with a “fulsome action plan and an accompanying budget” in November.

“If you talk to any of the energy firms in our city, they all have clear targets, they have action plans on how they’re going to achieve those targets,” she said after the vote. “For a municipal government to be saying the same things, and moving in the same responsive manner, capital markets take notice of those things.”

Ward 6 Coun. Richard Pootmans, who voted against adoption, said the strategy would stand or fall on community buy-in.

“The public needs to buy into this, he said. “If the public isn’t romanced, isn’t turned on by the excitement of being your own self-generated, net-zero home, that’s a fantasy right now.”

But climate hawks who showed up in force for Tuesday’s vote were happy to declare victory.

“This is a big win and showed that this Council can see through misinformation campaigns attempting to derail climate action,” the Calgary Climate Hub said in a release. “The majority of councillors who did not vote in favour were still open to thoughtful discussions about how to effectively tackle the climate emergency for Calgary.”