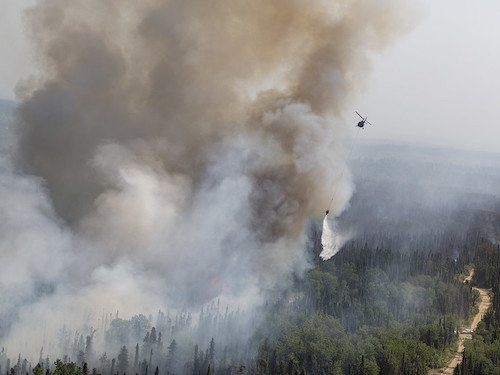 At the time, there were multiple large fires that required incident management teams in several areas simultaneously, Wildfire Today reports. PL5 status means most of the initial and extended attack firefighting resources are committed to new and existing fires. Nationally the PL is 2, according to the National Interagency Coordination Center, but each geographic area establishes its own based on local conditions.

There were 160 fires in Alaska late last week, with 17 staffed. With the predicted hot, dry weather, lightning, and Red Flag warnings, the fire risk is very high. Fire smoke is already at health advisory levels in parts of the state.

“Interesting times ahead for Alaska, Yukon, and the Northwest Territories,” tweeted veteran Edmonton-based wildfire watcher Mike Flannigan. “Ridge breakdown/eastward shift could bring explosive growth to the many fires in AK while the ridge ramps up fire weather in YK and NWT.”

Forecasters expected a heat dome to settle over Alaska Friday through Monday that would challenge daily record high temperatures. Fairbanks was expected to hit an abnormally high 85°F/29.4°C on Friday. That would be three degrees Fahrenheit below the July 1 temperature record of 88, which was set just last year.

The abnormal heat will pile on to already abnormally dry vegetation, Wildfire Today writes—or as known to firefighters, fuels. Anchorage received just 7% of its normal June rainfall, while Fairbanks saw 36% of its typical June totals.

The original coverage on Wildfire Today includes maps of the affected areas.