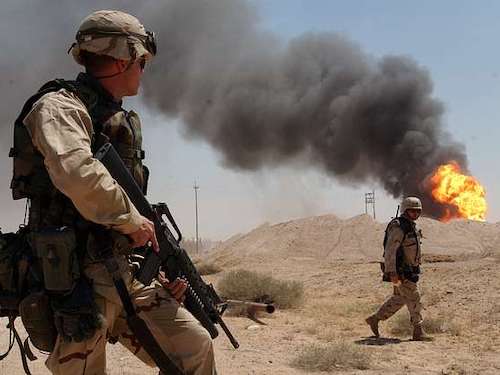 The North Atlantic Treaty Organization (NATO) has confirmed Montreal as the headquarters for its new Climate Change and Security Centre of Excellence, just weeks after a retired Australian military officer published an analysis of the “hyperthreat” humanity faces due to the global climate emergency.

Prime Minister Justin Trudeau announced the new centre in Madrid Thursday during the annual NATO summit, “as radical climate change evolves into a serious security risk for the military alliance,” the Globe and Mail reports.

(Military strategists actually recognized that threat as far back as 2008, when many of them talked to Canadian-British journalist and military historian Gwynne Dyer for his book, Climate Wars.)

The NATO decision lands just a couple of months after the U.S. Marine Corps University Press published an analysis of the “entangled security and hyperthreats” of the 21st century by former Australian army major Elizabeth G. Boulton in the Journal of Advanced Military Studies. In her PhD thesis, Boulton “finds that the vast national security sector (encompassing the world’s militaries, intelligence agencies, foreign affairs strategies, and associated think tanks) has been ‘unwittingly aiding the hyperthreat’,” which she defines as the unprecedented “combined impacts of rapid global warming and the unravelling of Earth’s ecological systems,” Byline Times reports.

The thesis traces the hyperthreat to human activity that “is often legal, has social licence, and is understood as legitimate business or security activity,” including “plans to exploit fossil fuel resources and natural ecological systems at rates and scales that will see safe planetary boundaries exceeded.” In fact, some actors’ intention “may be to move rapidly before humanity imposes defences or out-manoeuvres it via alternate technologies.”

Recognizing that the next eight years will be “pivotal” for shifting this frame, Boulton presents a “Plan E” that calls for a radical transformation in the way countries think about security. Byline Times calls it an “unapologetically bold and imaginative roadmap for how humanity’s defence resources can be recalibrated to 2100 in a whole of society approach,” based on three central goals: Making the hyperthreat “visible and knowable”, reducing its “freedom of action”, and achieving “mass and speed of response”.

It proposes to “leverage Earth’s entire human population as an asset” with actions at all levels, from home, work, and community to geopolitics.

“The hyperthreat sits within a context of old systems of order and meaning that are being disrupted and increasing insecurity,” Boulton writes in her own summary of the paper. “The aim of the hyper-response is to create a safe path to safe Earth. Among other critical actions, this requires reducing greenhouse gas emissions to limit global warming to 1.5°C and arresting the sixth extinction event.”

There’s no hint of such focused, ambitious language in the official release for the new NATO centre in Montreal. The facility “will be a platform through which both military actors and civilians will develop, enhance, and share knowledge on climate change security impacts,” states the Canadian government’s NATO website. “It will also allow participants to work together to build required capabilities and best practices and contribute to NATO’s goal of reducing the climate impact of our military activities.”

The site acknowledges climate change as “one of the defining challenges of our time,” adding that its growing impacts “pose direct and indirect threats to human and national security worldwide. Extreme weather events and climate pattern changes can threaten human life and well-being, economic security, political stability, public safety, property, and critical infrastructure,” while its effects can shape the behaviours of countries and non-state actors.

“Women, girls, Indigenous populations, those living in poverty, and other vulnerable or marginalized populations are often particularly at risk from the direct and indirect effects of climate change,” the federal site adds. “For all of these reasons, Canada and many of our global partners acknowledge the need to better understand and address climate change security challenges.”