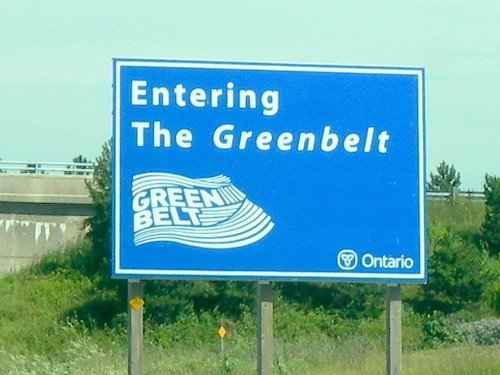 Public vigilance will be vital to preserving the well-being of the world’s greenbelts, which are needed more than ever but increasingly under threat, says a new report produced by the Ontario-based Greenbelt Foundation.

“Greenbelts are becoming increasingly important in the face of mounting global challenges, such as climate change, disruption in global food systems, extreme weather events, rising energy prices, and water issues and needs,” the foundation in a release to launch the report, an updated version of a 2010 publication.

“Safeguarding greenbelts and biodiversity is not an option but a condition for a viable, resilient future,” said Dr. Liana Geidezis, regional coordinator for the Central European Greenbelt. “We are currently experiencing massive destruction of natural and semi-natural habitats worldwide. Greenbelts are a very effective response to the global loss of habitats, species and to climate change, so international studies and mutual exchange are of great importance.”

Notably, four of the eight “greenbelts” included in the report are not greenbelts in the traditional sense of a “belt of continuous protected lands surrounding a city or region.” The list includes the 4.6 million hectares of agriculturally suitable land across British Columbia that compose the province’s Agricultural Land Reserve; the Green Heart of the Netherlands, a 182,000-thousand-hectare nature area surrounded by a ring of cities; the European Green Belt, a 12,500-kilometre region that spans 24 separate countries; and the 3.3-million-acre San Francisco Bay Area Greenbelt, a network spanning nine counties and 101 municipalities.

A point of common ground among these diverse efforts is that most have been established for enough years to have experienced “several political and policy changes,” and are currently seeing challenges similar to those faced by the Ontario Greenbelt, including “population growth, housing and infrastructure development pressures, environmental degradation, and loss of farmland.” The eight greenbelts chosen for the 2022 report also shared “one or more policy goals” with the Ontario Greenbelt Plan.

Key findings in the report include the need for strong public awareness and support for greenbelts and their long-term protection. The authors note that public involvement is “especially critical since the research shows that greenbelt policies are most often vulnerable to development and political pressures.”

The Greenbelt Foundation found a clear pattern of increased threats to greenbelt protections since 2010. They’re also acutely vulnerable to changes in political winds, and to policy goals that have “become increasingly multifunctional and are expected to fulfill more objectives than ever.”

While the COVID-19 pandemic pointed to a critical role for outdoor spaces like greenbelts in nurturing public health and well-being, that recognition is a double-edged sword, as it has generated a spike of interest in housing near greenbelts.

In its recommendations for the Ontario Greenbelt, the foundation urges policy-makers to “ensure the continued permanence of firm boundaries” and called for higher standards and levels of coordination for infrastructure projects and resource extraction within the greenbelt zone. It calls on policy-makers to “explore ways to increase the supply of Greenbelt-grown products in the local marketplace,” emphasizing the critical role that green spaces play in mental and social health, and urges efforts to make the system more accessible to all.