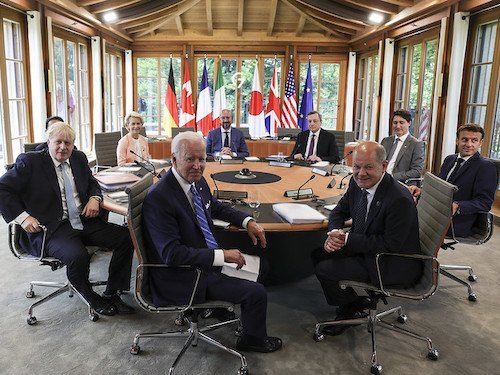 G7 leaders meeting in Bavaria this week affirmed their rhetorical commitment to climate action but walked back a month-old promise to swiftly end public investment in overseas fossil fuel projects as they sought to grapple with the energy crisis brought on by Russia’s invasion of Ukraine.

The summit agenda was dominated by the war, “which G7 leaders sought to counter by demonstrating strength and unity in the group of influential western economies,” writes Clean Energy Wire. “The leaders agreed to follow through on a key initiative by German Chancellor Olaf Scholz and establish a climate club by the end of the year, but were criticized for watering down language on electric vehicles and fossil fuels.”

Bloomberg explains that the point of the “climate club”, an initiative that Scholz proposed when his country assumed the G7 presidency in January, would be to “agree on joint rules and standards in the fight against global warming with the hope that it will avoid spats over green tariffs.”

The leaders also pledged to cooperate with developing and emerging countries through a series of Just Energy Transition Partnerships, the Berlin-based climate digest states. That effort is part of a US$600-billion, five-year plan to counter China’s Belt and Road Initiative by financing infrastructure projects in developing countries, Reuters writes.

“I want to be clear,” said U.S. President Joe Biden. “This isn’t aid or charity. It’s an investment that will deliver returns for everyone,” while allowing countries to “see the concrete benefits of partnering with democracies.”

In their final communiqué, the leaders of Canada, France, Germany, Italy, Japan, the United Kingdom, and the United States affirmed their “unwavering” commitment to the Paris climate agreement, including a 43% emissions cut from 2019 levels by 2030 to keep a 1.5°C limit on average global warming within reach.

“While taking immediate action to secure energy supply and stop the increases in energy prices driven by extraordinary market conditions, we will not compromise our climate and biodiversity goals including the energy transition,” they declared.

But Scholz, whose country is deeply vulnerable to reductions in Russian gas supplies this winter, held out for the G7 to finance new fossil fuel projects, “consistent with climate objectives”, Clean Energy Wire states.

“The decision to end financing for fossil fuels stands,” the German chancellor said. “However, of course we will help countries now in the current situation if they want to make investments into their energy supply, for example if they are hydrogen-ready.”

While Germany aims to be carbon-neutral by 2045, he added, “gas is needed for a transitional period, and that is why there may be investments that make sense in this phase and need to be supported.”

Going into the summit, climate analysts and campaigners had urged the leaders to stick with their climate ministers’ commitment, arrived at just last month, to end all public investment in international fossil projects by the end of this year, The Independent writes.

“It was a big triumph getting Japan to sign up to ending investment in overseas fossil fuels,” said Alex Scott, climate diplomacy lead at the E3G climate think tank. “We’re worried Germany could now water down the language because of the urgency they feel in replacing short-term gas supplies.”

And indeed, as the G7 leaders gathered, Scholz was “intensively” pursuing new fossil fuel projects in Senegal to replace supplies from Russia, Germany and Italy were both planning to bring old coal plants back online, and British Prime Minister Boris Johnson was keen to renew his support for a controversial new coal mine in Cumbria.

After it was all over, E3G policy advisor Johannes Schroeten said the G7 had squandered a “golden opportunity” to bring a faster end to fossil fuel finance. “Chancellor Scholz’s attempt to carve out large exemptions from the COP 26 statement on international public support for the clean energy transition has been averted—but only just,” he said in a release. “The integrity of the policy stands, but we need urgent clarification of timelines and investment criteria, beyond the empty notion of hydrogen-readiness.”

“The G7 commitment on fossil fuel finance is so riddled with holes, it could be mistaken for Swiss cheese,” agreed Eddy Pérez, international climate diplomacy manager at Climate Action Network-Canada. “When it comes to cutting their addiction to fossil fuels, wealthy polluters continue to take one step forward, two steps back. They claim to understand the urgency of climate action, but underlying those nice words is a refusal to change their colonial habits of expansion and extraction—to the cost of the world’s poorest and most marginalized people.”

“Today the G7 under the leadership of Chancellor Scholz has prioritized filling the pockets of the fossil gas industry over protecting peoples’ lives,” added Laurie van der Burg, co-lead of Oil Change International’s Global Public Finance Campaign. “The G7 leaders’ weakening the ministerial pledge to end public finance for fossil fuels by the end of this year cannot be allowed to turn into a huge missed opportunity to shift US$33 billion a year to real solutions.”

In the weeks leading up the G7 gathering, European countries including Germany had been scrambling to secure new sources of natural gas against the threat that Vladimir Putin would cut off supplies. Already, Russia has reduced those exports, in a bid to prevent importing countries from filling up their gas storage inventories before winter.

Still, “today’s nod to support investment in new LNG infrastructure is misguided,” E3G Senior Researcher Euan Graham told The Energy Mix in an email yesterday. “This new supply will come online too late to help with the current supply crisis facing countries across the globe, and will lock in expensive gas supply for decades. This will compromise climate commitments, and sustain a reliance on the very same fuel that has decimated global energy security this year.”

The alternative, Graham added, is for the world’s wealthiest countries to “put in place emergency measures to reduce gas demand, act in solidarity with countries in the global south who are acutely impacted by spiralling gas prices, and invest urgently in renewables and energy efficiency to move away from gas for good.”

Oil Change’s van der Burg agreed that “investing in new gas infrastructure is not a viable strategy to reduce Russian fossil fuel imports—these projects take years to build and do not support energy security in the long run. Renewable energy and efficiency solutions can be deployed faster, better serve development and energy access needs, and do not come with the stranded assets and financial stability risks of fossil gas.”

But those “medium-term” gas projects were on Prime Minister Justin Trudeau’s mind as he connected with his international counterparts this week and held a bilateral meeting with Scholz, Bloomberg reported yesterday. While he didn’t get into specifics, Trudeau repeated past government statements about building liquefied natural gas (LNG) export facilities that could then be converted to supply green hydrogen.

Canada is “looking in the medium term at expanding some infrastructure, but in a way that hits that medium-term and long-term goal of accelerating the transition not just off Russian oil and gas, but off of our global dependence on fossil fuels because of the impacts of climate change,” he told media in Germany.

In an exclusive analysis in mid-May, The Energy Mix reported on the significant obstacles to that plan, beginning with the disconnect between Germany’s explicitly short-range interest in LNG imports and the longer-term contracts a Canadian producer would need to finance a viable project. There was little indication in a more recent news report this week that Calgary-based Pieridae Energy, the company behind the proposed Goldboro LNG terminal in Nova Scotia, has progressed beyond the stage of pitching for feasibility funding.

But while the talk in mid-May was that German Economic Affairs and Climate Protection Minister Robert Habeck would be travelling to Canada in August to continue the import-export discussion, Trudeau has now upped the ante by extending that invitation to Scholz.