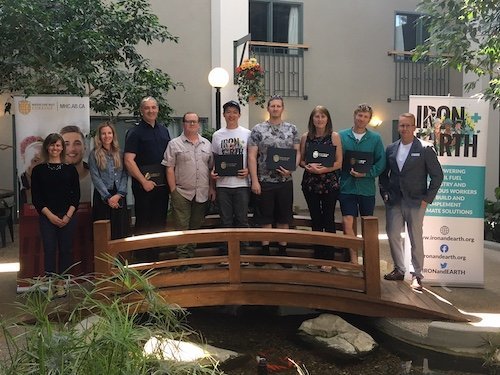 A group of 15 trainees will be heading out into the field to begin converting two Alberta oilfield sites into solar farms, after graduating from a rapid upskilling program for fossil industry and Indigenous workers hosted by Iron & Earth and Medicine Hat College.

The inaugural training took place June 20-27, and the trainees gathered with funders and partners yesterday for a “celebratory course completion event” in Taber, Alberta, Iron & Earth said in a release.

The program included 24 hours of classroom work and 16 hours of hands-on training, with course modules on oilfield decommissioning and solar design and construction.

The two pilot sites near Taber, Alberta include Barnwell, a 1940s oilfield where past oil spills were never cleaned up, and Fincastle, a natural gas site that was drilled in 2008 and operated until 2014 when its owner went bankrupt, said RenuWell Project founder Keith Hirsche. Once the reclamation work is complete, the two sites will generate just over 2,000 megawatt-hours of electricity per year, enough to power 280 average Alberta homes or irrigate about 4,750 hectares/11,700 acres of farmland in an average year, the release stated.

That adds up to C$200,000 worth of electricity and 1,100 tonnes of carbon dioxide savings per year, for a project with an expected 25-year lifespan.

“It’s a capacity-building program,” said Iron & Earth Executive Director Luisa Da Silva. “We bring fossil fuel workers and Indigenous workers in to provide them with opportunities to gain real-world skills. By participating in the RenuWell program, workers can immediately see how their skills can be used in a real-world scenario. And there’s lots of opportunity.”

About 10% of the province’s estimated 170,000 abandoned wells are suitable for solar development, said Hirsche, a former fossil industry geoscientist who traces his interest in renewable energy to a family visit to Denmark in 2003. That 10% would translate into about 12,500 hectares/31,000 acres of solar installations, 6,200 megawatts of renewable energy capacity, more than 4.5 million tonnes of annual CO2 savings, $650 million in annual revenue, and 55,900 person-years of employment, at a total up-front cost of $11.1 billion.

“If you’ve worked on an offshore drill rig, you know how to work on an offshore wind turbine,” she said. “If you’ve worked in a refinery, you understand how a biofuels plant works. The same welding skills you need to build a wind turbine are the ones you use throughout the oil and gas sector. Everybody who has worked in fossil fuels, has worked in the energy sector, has all the baseline skills to work in the clean energy sector. All they really need is a little bit of training to help them understand how those skills translate.”

“That’s the challenge we need to meet the targets,” Da Silva added, “but it’s also the opportunity that exists.”

Da Silva and Hirsche stressed that the projects would be built on sites that are unsuitable for farming, producing enough renewable electricity to meet Alberta’s 2030 target while leaving productive land available to produce.

“Alberta has some of the richest renewable resources in Canada for both wind and solar,” Da Silva said, and “by placing renewable energy on this disturbed land, it leaves agricultural lands for agricultural purposes. That’s actually part of the reason to do it this way. So we do have an opportunity here that needs to be capitalized on and accelerated. The demand for it in Alberta is enormous.”

“The best abandoned oil and gas leases for solar construction are located on poor-quality farmlands near existing access roads and power lines, which preserves higher-quality land for agricultural uses and reduces the disturbance of reclamation,” agreed Daryl Bennett, director of the Action Surface Rights Association, in the Iron & Earth release. “Irrigation farmers can utilize the power directly for their irrigation systems and also reduce the costs of electrical distribution and transmission, which obviously appeals to regional farmers.”

Irrigation that Farmers Can Afford

Hirsche said access to affordable irrigation is becoming even more important with the province’s farmers feeling the direct impacts of climate change.

“Less than 5% of Alberta cropland is irrigated and it generates more than 25% of the agricultural value for the province,” he told The Energy Mix in an email. “Overall, the impact is estimated at $5.4 billion annually. Most of the irrigation infrastructure, including pumps and pivot irrigation systems, is powered by electricity, and with our rapidly changing climate, the demand for electricity in the summer is now exceeding the winter peak. This has led the utilities to expand distribution and transmission networks which—in turn—has increased the costs of these services by 300% over the past 10 years.”

Hirsche said the RenuWell approach helps ease that burden while treating the leftover infrastructure on former well sites as a usable asset, rather than a liability that industry or (more likely) taxpayers would have to pay to remove.

“We’re using brownfield sites for solar energy projects, which allows for productive use of the land while the long-term bioremediation process occurs,” he said in the release. “Instead of removing the roads and power lines during well reclamation, these pieces of infrastructure can stay in place and be repurposed for the solar energy project. This saves time and money for both the conventional and renewable energy industries.”

The pilot project is backed by a $2.1-million grant from the Edmonton-based Municipal Climate Change Action Centre, along with a $1.5-million contribution from IRRICAN, a water and irrigation co-op owned by the St. Mary River, Raymond, and Taber irrigation districts. Other partners include the Municipal District of Taber, Canadian Solar Inc., and SkyFire Energy Inc.

Use It or Lose It

Da Silva said RenuWell’s approach to worker retraining and oilfield reclamation could be applied to wind and geothermal projects, as well. But ironically, parallel efforts to remediate orphaned and abandoned oil wells have Iron & Earth and its partners racing against the clock.

“This is a highly replicable program,” she said. But “the challenge is catching it in time, so we can capitalize on the opportunity before the infrastructure is removed. All of these sites have electricity and roads going through them, and that’s what enables this kind of program to happen.”

Hirsche said RenuWell has been working with Guelph-based photovoltaic developer Canadian Solar to develop a “library of sites” that would lend themselves to solar conversion. The two partners are still working through the administrative details that would allow them to expand on the initial pilot project.