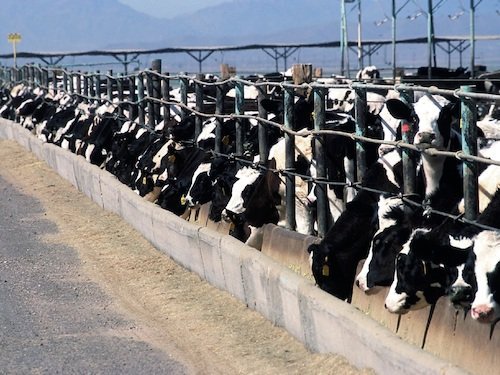 This story is part of the Food & Water Joint Coverage Week of Covering Climate Now, a global journalism collaboration strengthening coverage of the climate story.

British researchers have produced a new twist to the great pandemic debate, arguing that intensive livestock farming—the crowding of animals into feedlots and factory farms in ways widely blamed for spreading new disease—might actually help reduce the risks of introducing new and potentially devastating global pandemics from the wild.

COVID-19 has been linked to a coronavirus carried by wild species—bats, for instance, and pangolins—and is classed as a zoonotic disease. Since 2020, it has infected more than 500 million people, claimed more than six million lives, and all but shut down the world’s economies.

The HIV virus was first introduced to humankind from the African forests; so was the deadly Ebola infection. So, long ago, was the zoonotic disease influenza, and before that, bubonic plague.

Climate change, too, could be implicated in pandemic hazard. Global health experts calculate that over the decades at least two new diseases a year have been introduced from the wild. And more could be on the way. Mammals, birds, and other wild creatures may be host to 1.7 million so far unidentified viruses: that could mean another 550,000 new diseases waiting to be caught as humans continue to intrude upon and exploit the remaining natural world.

Now, a team of researchers from Cambridge University reports in the Royal Society’s Open Science journal that intensive farming practices—which have been challenged by both animal welfare activists and health authorities worried about the sudden spread of new diseases—could perhaps actually help reduce the risks of new and even more alarming global epidemics.

The argument goes like this: cram animals together, and if a new animal disease emerges, the infection takes off with devastating speed. On the other hand, humanity gets more protein from a smaller farm space, which means less intrusion into the still-undisturbed rainforests, savannah, and wetlands that are host to the world’s surviving wild things. So there might be a lower risk of what health experts call spillover diseases: that is, they spill over from the wilderness.

Humankind could, of course, solve a number of global problems at one time by reducing or giving up meat consumption and relying more on a plant-based diet. This would deliver more nourishment from a much smaller farmed area and return much more land to the wilderness. This, in turn, would help reduce the risk of species extinction on a massive scale, and at the same time reduce the global hazard of climate change by intensifying the uptake of carbon by natural ecosystems.

“Reducing meat consumption could considerably shrink the amount of land we need to feed ourselves. This could allow widespread restoration of wild habitats and reduce the risk of spillover,” said Harriet Bartlett, a zoologist and doctoral student at the department of veterinary medicine at Cambridge, who led the study.

“However, reducing meat demand quickly has proven to be challenging, and it seems very unlikely we will stop keeping livestock, so it is essential to consider which ways of meeting any given level of demand are least risky.”

Research like this is, in effect, provocative: it is intended to make people think about a global problem on something like a global scale. In the next 30 years, the planet’s burden of humans could rise to almost 10 billion, and demand for food will increase dramatically. In the same time scale, an estimated million or so plants and animals could face extinction, thanks to human encroachment on the natural world.

And in the same decades—unless global action is concerted and drastic—planetary average temperatures will go on soaring to potentially calamitous levels, and a high proportion of the greenhouse gases that fuel global heating will be linked to food production. The scientists make it quite clear that they cannot prove that intensive farming will reduce overall new disease hazards. But it remains a possibility.

“Many blame intensive livestock farming for pandemics, but fail to consider the counterfactual—the risks associated with farming less intensively, which requires substantially more land and could increase spillover risk,” Bartlett said. “We were concerned that this blind spot meant we were reaching a premature conclusion about which types of farms are riskiest.”

She and her colleagues looked at the evidence available so far and did the calculations. Under the notorious business-as-usual scenario, in which humans go on burning fossil fuel and exploiting the natural world as they have done for two centuries, farmers would need another 12.5 million square kilometres of farmed land between 2009 and 2050. This would mean converting the equivalent, in terms of natural habitat, of the entire area of Brazil and India into cropland and pasture, which would most certainly accelerate contact between people, livestock, and wildlife of the kind that might host the next pandemic virus.

The point the scientists make is that meat demand is increasing: more than 40% of all tropical deforestation between 2005 and 2013 happened because of demand for beef worldwide. More than three-quarters of all agricultural land is already devoted to livestock production and animal fodder, adding up to 39% of all habitable land on Earth. So intensifying livestock production should reduce the risk of “spillover” of potential pandemic infections.

On the other hand, crowding farm animals more closely would certainly make the possibility of “takeoff” infection more hazardous. Nobody, as yet, can decide what is less dangerous, so more research is necessary. The world’s farmers however, might provide the answer: they already have experience of takeoff and spillover.

“It is currently impossible to determine which types of system best limit the risks of future pandemics,” said Bartlett.

“To fill these gaps we need to collect evidence from a broad range of farming systems, from initial spillover through takeoff within farms through to spread further down the supply chain,” she added. “Farmers will be fundamentally important in this work—in collaborating with researchers, data collection and implementing interventions.”