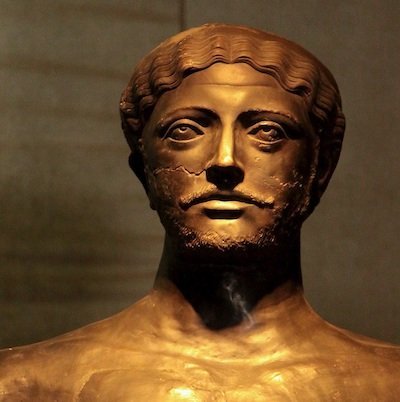 Once again, climate science has helped light up ancient history. Researchers have found evidence of prolonged and devastating drought in the south Arabian Peninsula that enfeebled an ancient kingdom and created conditions ripe for the arrival of a new faith: Islam.

The point made by such research is that climate change doesn’t just threaten vulnerable communities: it may produce disruption and change at the level of civilizations. The latest evidence tells a new story about the decline of the Himyarite Kingdom of what is now Yemen and part of Ethiopia across the Red Sea, a kingdom based on irrigation, agriculture, and the global trade in frankincense and myrrh.

“It was a bit like a murder case: we have a dead kingdom and are looking for a culprit. Step by step, the evidence brought us closer to the answer,” said Prof. Dominik Fleitmann of the University of Basel, who with colleagues tells the story in the journal Science.

“Water is absolutely the most important resource. It is clear that a decrease in rainfall and especially several years of extreme drought brought us closer to the answer.”

The researchers, who pieced together evidence from stalagmites in an ancient cave in Oman, now think that years of extreme drought can be timed accurately to the collapse of Himyar society and its monarchy around the years 520 of the Christian Era. Political unrest followed, along with conflict, war with the late Roman empire of Byzantium and the powerful Sasanids in what is now Iran, and the collapse of a culture.

And, the researchers argue, the uncertainty, hunger, and hardship that characterized this collapse presented a chance to change the course of history.

“When we think of extreme weather events, we often think of only a short period afterwards, limited to a few years,” said Fleitmann. “The population was experiencing great hardship as a result of starvation and war. This meant Islam met with fertile ground: people were searching for new hope, something that could bring people together again as a society. The new religion offered this.”

In fact, the region at the time was home to Judaic traditions, Christians and pagans or polytheists. The prophet Muhammad’s famous flight from Mecca to Medina, and the text of the Qu’ran, are dated to early in the seventh century, so political disarray, hunger, and conflict endured for more than a century before a new faith began to unite the Arab tribes and alter the course of human history.

Fleitmann and his colleagues are careful not to claim that extended drought and regional climate change in fact triggered the rise of a new world religion. “However, it was an important factor in the context of upheavals in the Arab world of the sixth century,” he said.

Climate scientists in the last decade have established—with varying degrees of certainty—a number of links between devastating regional climate change and societal shifts, or even collapse.

From a study of fossil pollen grains preserved in a Cyprus salt lake, they pieced together a story of a 300-year drought that coincided with the collapse of Bronze Age civilization in the Eastern Mediterranean more than 3,000 years ago.

A mix of tree ring data, stalagmite sediments, and lake sediments confirmed the failure of the Assyrian civilization during a 60-year drought six centuries before the Christian Era.

An Alaskan volcano darkened European skies, lowered northern hemisphere temperatures, and precipitated famine and harvest failure at the close of the Roman Republic: the dynasty of the Ptolemies in Egypt ended in the same decades when the Nile floods failed.

Three fearsome eruptions darkened the Roman skies in the years 536 to 547 CE, to be linked with the Plague of Justinian, a murderous epidemic that has also been cited as a possible enabling condition for the rise of Islam in the century that followed.

Harsh climate conditions in the 13th century may even have helped halt the advance of the Mongolian hordes of Genghis Khan as they swept into Europe, according to yet another study.

The point to understand here is not that this or that climate event toppled this or that kingdom, polity or empire—human history is far too complex for one-cause explanations—but that cultures and civilizations endure during periods of climate stability, and tend to be under stress when harvests fail, food is scarce, and prices soar.

And the Himyaric Kingdom seems to have been stable for centuries: terraced fields and dams in Yemen are still there in silent testimony to what had once been fertile fields managed by a well-organized society. The ancient Romans had known the region as Arabia Felix, happy or flourishing Arabia.

That the kingdom collapsed in crisis is not in doubt. The question is: why? And with evidence from the Dead Sea, from ancient texts and from the deposits on stalagmites in a cave in what is now Oman, an international team of scientists was able to pinpoint, to an accuracy of about 30 years, the existence of a long, increasingly dry spell that ended with societal failure.