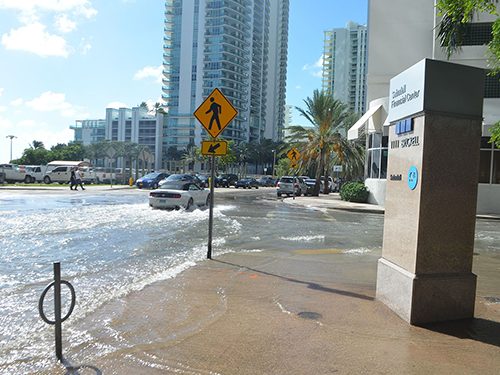 The Statewide Flooding and Sea Level Rise Resilience bill “is comprehensive legislation that ensures a coordinated approach to Florida’s coastal and inland resilience,” a spokesperson for Florida’s Department of Environmental Protection (DEP) told The Energy Mix. “The targeted funding and new directives will enhance our efforts to protect our inland riparian areas, coastlines, shores, and coral reefs, which serve as invaluable natural defences against sea level rise.”

The bill builds upon 2021 legislation that had “yielded the largest investment in the state’s history to ensure state and local communities are prepared to deal with the impacts of sea level rise, intensified storms, and flooding,” the spokesperson said. Among other things, the earlier bill allocated millions of dollars to infrastructure and vulnerability assessments and called on the DEP to compile flood and sea level rise data to support those assessments.

The new bill was approved by Governor Ron DeSantis on May 3. It also establishes the Office of Resilience and Coastal Protection—created days after DeSantis took office in 2019—within the governor’s executive office, putting it “directly under his watch,” writes the Tampa Bay Times.

But environmental groups and climate advocates have criticized the legislation for not going far enough to address the state’s generation of greenhouse gas (GHG) emissions as the “root cause” of its vulnerability to climate change. Critics say DeSantis “has failed to show much action on what is causing climate change and address the state’s reliance on fossil fuels,” writes Inside Climate News.

“There is an emphasis on resilience, which is important, but nothing on actual mitigation or helping to combat our carbon production and the human actions that are causing sea level rise,” said State Representative Anna Eskamani (D-Orlando).

Several amendments proposed for the bill—including one that would have called on the resilience officer to recommend policies to “mitigate against the impacts, and reduce the root causes, of sea level rise and flooding,” and another that would have required DEP to create a GHG inventory and climate impact assessments baseline—died in the legislature, before reaching DeSantis’s desk.

Thomas Ruppert, coastal planning specialist for Florida Sea Grant, contends that the new legislation could make the state more vulnerable by encouraging “a sense of safety and further investment in areas that may not, over the longer term, be very safe,” Inside Climate reports.

The scope of the bill aligns with the environmental policy approach of DeSantis, who has said in the past he is “not a global warming guy” and explained his investment in coastal resilience as “just reacting to the fact that, OK, we’re a flood-prone state, we do have storms.” He has also signed legislation that pre-empts local governments’ authority to enact natural gas bans, but recently set aside $500 million for resilience in the state’s 2022-23 budget, $270 million of which is allocated to fully fund all three years of the Statewide Flooding Resilience Plan.

Despite the criticism, the new legislation is successfully dispersing millions of dollars of state funding to local governments to respond to the impacts of climate change. Projects so far include community-led resilience projects to fortify waste management facilities, strengthen hard infrastructure, and support nature-based solutions like mangrove restoration.

Dr. Shi-Ling Hsu, D’Alemberte Professor atFlorida State University College of Law and author of Capitalism and the Environment, told The Mix that he doesn’t agree with criticism of the bill’s focus on adaptation without also reducing emissions. While he is critical of the state’s inaction on emissions cuts, “that is not a reason to oppose this legislation,” he said.

“For one thing, I’d rather have the adaptation without the mitigation, than have nothing,” he said. And it could be “rational for a state governor to conclude that emissions reduction has to be a national law, not necessarily a state one.”