‘It Could Have Been Any of Us’, Colleague Says, After Brazil Confirms Murders of Bruno Pereira, Dom Phillips 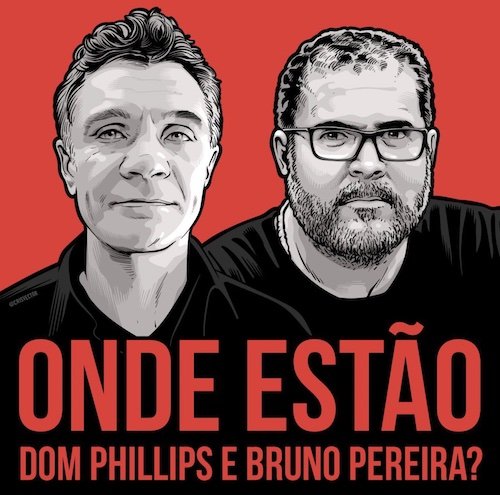 Journalists, Indigenous and human rights campaigners, and climate and land defenders are mourning a monumental loss and demanding answers after authorities confirmed that Brazilian Indigenous expert Bruno Pereira and British journalist Dom Phillips were murdered in the Javari region of the Amazon earlier this month.

“For environmental journalists and environmentalists in Brazil, Dom’s loss and Bruno’s are particularly depressing, because it could have happened to any of us,” an analyst with the country’s Observatório do Clima (Climate Observatory) told The Energy Mix in an email. “We do know violence in Brazil, of course. No one is safe in our major cities. But a murder like that, with that much cruelty, in the line of duty, leaves us all devastated.”

The analyst recalled Phillips, a regular contributor to the Guardian and the Washington Post, as “a very sharp reporter, very rigorous with his research and always asking insightful questions. As a source, I was often in hot water to respond. But he always struck me for his extreme kindness…He was first and foremost a good person.”

Recent news reports had Phillips working on a book-length investigation on massive Indigenous rights and environmental abuses in the Amazon rainforest. Pereira, a longtime Indigenous rights defender who previously worked for Brazil’s Indigenous rights agency, FUNAI, was demoted by the far-right government of President Jair Bolsonaro after organizing a raid on illegal businesses in the region.

According to a timeline circulated to climate media, Phillips and Pereira disappeared June 5 in the Javari, a very remote corner of the Amazon near Brazil’s border with Peru and Colombia. The area is home to 11 Indigenous communities that have chosen to live in voluntary isolation from the surrounding society—much to the disgust of Bolsonaro, who had vowed to weaken FUNAI and not extend formal protection to “one more centimetre” of Indigenous land.

Writing from exile in Europe, Pereira’s former colleague Ricardo Rao traces the life of a FUNAI Indigenista in this post for Amazônia Real. [With a caution about the limits of Google Translate—Ed.]

“As Bolsonaro made good on a campaign pledge to take a ‘scythe’ to FUNAI for its role in formally recognizing more Indigenous territories, Pereira was taken off field activities and replaced with an evangelical missionary,” the Brazzil news site reports. So “Pereira—like some other colleagues sidelined at FUNAI—found his way back to the work he felt passionate about, taking leave from his government job to return to the front line of Indigenous protection: the remote Amazon Javari Valley.”

Pereira received an explicit threat from illegal fishermen in the area the day before he and Phillips disappeared, according to multiple news reports. “Under what analysts say is a weakened FUNAI, Indigenous areas in the ‘wild west’ of the Amazon have faced worsening incursions by land grabbers, gold miners, illegal hunters and fishermen, and drug trafficking gangs,” Brazzil says.

Between June 6 and 8, the official response to the disappearances was criticized as “woefully inadequate,” the timeline states. “The army initially said it would only launch a rescue mission once given orders from a higher command, wasting the precious hours immediately after Dom and Bruno disappeared.”

Bolsonaro’s military “took three days to deploy a helicopter to the region,” while “Unijava, an entity that brings together representatives of each of the peoples living in voluntary isolation in the Javari valley, was all along the front line of the search work.”

Between June 9 and 12, a first suspect in the disappearances was arrested as the search teams increasingly lost hope of finding Phillips and Pereira alive. Bolsonaro dismissed their work as an “adventure”, and the politically-appointed president of FUNAI said the pair had been acting illegally in the region, before receiving a court order to remove that allegation from the organization’s website June 14.

That web posting, “in the wake of a tragedy revealed by the disappearance of two Indigenous rights defenders, is violative of human rights, is untimely, is undue, and its content is not compatible with the reality of the facts and the norms in force,” the judge said in her decision.

On June 15, Brazilian police confirmed that two brothers, Oseney and Amarildo da Costa de Oliveira, both 41, had been charged with the murders after Amarildo, nicknamed “Pelado”, confessed to the crime and led authorities to the bodies. Indigenous people who were present said Pelado had brandished a rifle at Pereira and Phillips the day before they disappeared, The Associated Press writes.

Colleagues of the two murdered researchers were scathing in their grief.

“By its omission in the search or by encouraging criminals, the Bolsonaro government has its fingerprints all over this terrible tragedy that saddens us all,” said Observatório do Clima Executive Director Marcio Astrini.

“This brutal and cruel murder is concrete proof of the total absence of the Brazilian State in the Amazon and in the defence of the environmentalists, public servants, traditional peoples, and journalists who are giving their lives to fight against the deforestation of the Amazon,” said Ana Toni, executive director of the Instituto Clima e Sociedade (Institute for Climate and Society). “To have sovereignty is to take care of your people and your territory and it seems that the Brazilian State is handing over the Amazon to militia and criminals. We are all outraged and we need to defend the Amazonians and Amazon Forest.”

“It is with immense sadness and outrage that we received the news of the assassination of Dom Phillips and Bruno Pereira,” said Natalia Mazotte, president of ABRAJI, the Brazilian Association of Investigative Journalism. “They fought for a Brazil in which the Indigenous peoples had a voice, in which the Amazon was kept standing, and environmental crimes were not ignored.”

The “barbaric crime is not an isolated episode,” she added. “We continue to see signs of the degradation of civic space in what has become one of the most dangerous countries in the world for journalists and activists.”

“In recent years, all instances of protection of forest peoples and the environment have been systematically disorganized and discredited,” said WWF-Brasil Director Mauricio Volvodic. “Violence against them has increased exponentially in the last three years and nothing has been done,” during a wave of destruction that has led to record forest loss.

“We have never been so close to the point at which the forest can no longer sustain itself.,” Volvodic added, making “the death of the Amazon itself” the context for Phillips’ and Pereira’s murders.

Amnesty International Brazil “will continue to investigate and demand clarity over the circumstances surrounding their disappearance and murder, as well as accountability for all those involved in this crime,” Executive Director Jurema Werneck said in a release. “President Jair Bolsonaro’s government must not turn a blind eye to the crimes occurring in the Amazon, nor be complicit in them,” and “all possible measures must be taken to put an urgent end to this cycle of violence in the Amazon.”