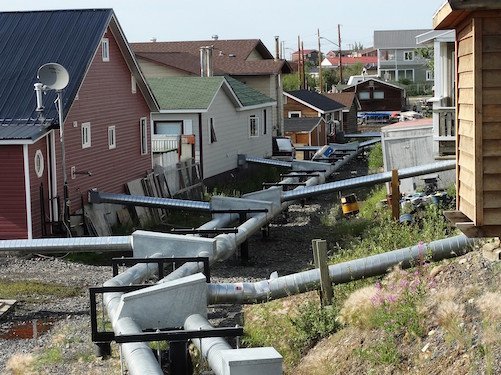 The first major assessment of the costs of climate change to infrastructure across Northern Canada calls for action from all levels of government to bring about “transformative adaptation” and address the dual crises of climate hazards and infrastructure gaps.

“Incremental adaptations alone won’t be sufficient—the effects of climate change are only exacerbating decades, if not centuries, of poor planning, underinvestment, and neglect,” writes the Canadian Climate Institute (CCI) in its report, produced after two years of research alongside Northern rights holders, governments, and other stakeholders. It is the fourth publication in CCI’s Costs of Climate Change series.

With temperatures in Northern Canada rising at three times the global average, the rapidly changing environment poses grave threats to critical infrastructure like airports, roads, and buildings, writes CCI. Infrastructure is “a matter of life and death” for those living in Northern communities, as they rely on it to overcome unique geographic barriers for accessing critical services like health care.

“Unlike road networks in southern Canada, the Northern communities that are accessible by road typically only have one road leading in and out. This means that an emergency road closure due to a landslide, fire, flood, or washout can quickly cascade to food shortages at grocery stores, medical emergencies with no access to care, and dwindling fuel supplies,” CCI writes.

And Northern infrastructure systems are uniquely vulnerable to shocks and disruptions. Multiple systems are often strongly interconnected and depend on each other, and the failure of one system can ripple across others. Plus, buildings often serve multiple purposes within a community—for example, a school is often a town’s largest building, and therefore also serves as a community gathering place and emergency shelter—meaning that an impact to one building can affect several community functions. And the limited availability of hospitals means that there are few health care alternatives if any event obstructs hospital access.

These risks are made worse by an infrastructure gap formed by a history of poor planning that was imposed on Northerners by southerly interests and by colonialism that focused on resource extraction rather than the needs of Indigenous peoples. Poor quality of infrastructure, housing shortages that lead to overcrowding, lagging Internet service, and a complete absence of regional electricity grids are but a few of the issues that disproportionately affect Northern communities.

With the accelerated threat of warming, “already-inadequate infrastructure will suffer unique and potentially devastating challenges if the gap is not addressed in ways that account for this rapid and dramatic climate change,” CCI says.

But inferior infrastructure is not an inevitable outcome of Northern development, and other circumpolar countries have sustained higher quality infrastructure for their communities. The report cites Alaska’s average broadband Internet speed, slowest in the United States but still “faster than the fastest available speed in Nunavut,” as an example. And Alaska has spent more than US$250 million over the last decade on renewable-powered microgrids, moving away from diesel-powered generation. Other examples are the deepwater ports of Russia, Greenland, Finland, and Norway that make it easier to unload fuel and supplies at each community.

The report says addressing the Northern infrastructure gap will require transformative adaptation that could include relocating infrastructure to more stable terrain, reimagining the way infrastructure services are delivered, and supporting education and community knowledge to build awareness of climate hazards.

“The warming climate creates both a need and an opportunity to fundamentally rethink how infrastructure is built in the North, for Northerners,” says CCI.

‘It Could Have Been Any of Us’, Colleague Says, After Brazil Confirms Murders of Bruno Pereira, Dom Phillips