Sharma in the Running for Next UN Climate Secretary 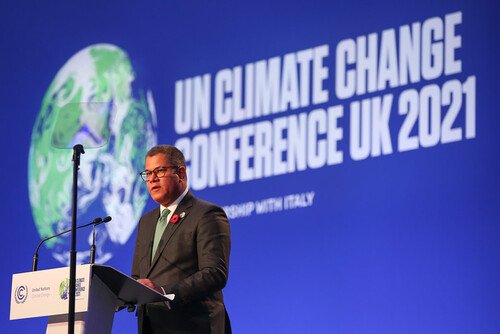 Alok Sharma, the British politician appointed by Prime Minister Boris Johnson to serve as COP 26 President, is one of the candidates to lead the United Nations climate secretariat when its current head, Patricia Espinosa, steps down next month.

Sharma has been approached about the new assignment and is reportedly open to accepting it, the Guardian reports. The appointment would be a coup for Johnson in his efforts to promote a post-Brexit “global Britain”, but would trigger a “tricky byelection” in a constituency the country’s ruling Conservative party might lose.

“The former business secretary, known through two years of fraught negotiations as ‘no-drama Sharma’ for his calm exterior, stunned observers when he became emotional in the final dramatic moments of the Glasgow summit last November, as the hoped-for deal was nearly sunk in the final stage by disputes with China and India,” the Guardian writes. “His management of the conference, which led to the Glasgow Pact in which world leaders agreed to limit global temperatures to 1.5°C, won plaudits.”

Climate reporter Fiona Harvey recalls Sharma forging “many close relationships with poor nations” while serving as the UK’s international development secretary from July 2019 to February 2020, when he was appointed COP President. “As India’s delegates threatened to disrupt the closing moments of COP 26, he negotiated with them directly in Hindi.”

But while Sharma got warm reviews from former senior UN climate officials Rachel Kyte and Christiana Figueres, his appointment isn’t a done deal. The Guardian says developing countries prefer a candidate from the Global South, after seeing five successive climate secretaries appointed from other parts of the world.

“Since the first three executive secretaries were European, and the next two from the Americas, I believe the next one will be from another region, and likely female,” one developing country diplomat told Harvey.

Other potential candidates include Selwin Hart of Barbados, Jeanne d’Arc Mujawamariya of Rwanda, Yasmine Fouad of Egypt, and Sri Mulyani Indrawati of Indonesia.