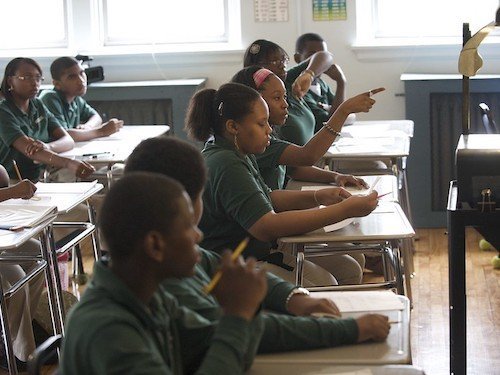 Extreme heat and humidity is inhibiting learning and leaving teachers in the United States anxious for the well-being of their students, as researchers estimate that by 2025, one in four public schools in the country will need to install air conditioning or upgrade their existing ventilation systems.

A study found that school districts in the United States are declaring nearly twice as many “heat days” as they were a decade ago, closing schools early as sweltering temperatures make their poorly-ventilated classrooms unbearable without central air systems. The research by civil engineering professor Paul Chinowsky for Resilient Analytics warned that by 2025, more than 13,700 schools will have to install air conditioning, and an additional 13,500 will need upgrades, writes the Washington Post.

The costs will run into “hundreds of millions of dollars,” Chinowsky said, at a time when U.S. school districts are scrambling to cover the cost of basic classroom supplies.

The link between extreme heat and poor learning outcomes has been confirmed, writes the New York Times. A 2020 study in the journal Nature Human Behaviour found that “students scored worse on standardized exams for every additional day of 80°F (roughly 26.5°C) or higher temperatures.” The study also found that “being exposed to higher temperatures mainly impaired the learning of Black and Latino students, who are less likely to have air conditioning at school and at home.”

They are also less likely to have easy access to the public spaces—pools, parks, and tree-lined streets—available to their white, and typically wealthier, peers to keep cool in evenings and on weekends.

While extreme heat already kills some 350 New Yorkers every year, “the risk is not shared equally,” with Black residents “more than twice as likely to die from heat” as their white neighbours.

The Times adds that whereas “in Crotona Park East in the Bronx, 41% of residents fall below the federal poverty line, 24% of households lack air conditioning, and few have cars to reach beaches or forests,” 96% of the homes in the Upper East Side neighborhood of Carnegie Hill have AC. Largely white and wealthy, Carnegie Hill residents also have the wheels and the means to flee the city on its hottest days.

For those who remain, New York City is ill-equipped to provide shelter from the increasingly high temperatures of summer, particularly due to a shortage of one traditional haven from soaring temperatures: the public pool.

NYC “still has less than one pool per 100,000 residents, fewer than most U.S. cities, with more per capita in the whitest, wealthiest boroughs, Manhattan and Staten Island,” writes the Times. “Black and Latino children still lag in access to swimming lessons and drown at higher rates.”

The city’s parks also favour the white and the wealthy, with communities of colour “more likely to be among the 33% with no park within a five-minute walk.” The bulk of city funds supplementing Parks Department budgets goes to Manhattan’s parks, adds the Times.

In Canada, the Pembina Institute is stressing the need to “future-proof British Columbia’s housing stock” in the wake of a report by the province’s chief coroner on the 619 heat-related deaths that occurred during last summer’s heat dome. Stating that “preparations for unprecedented rises in temperature must include funding for infrastructure upgrades and focus on the most vulnerable,” Pembina urges the province to make deep building retrofits its top priority.