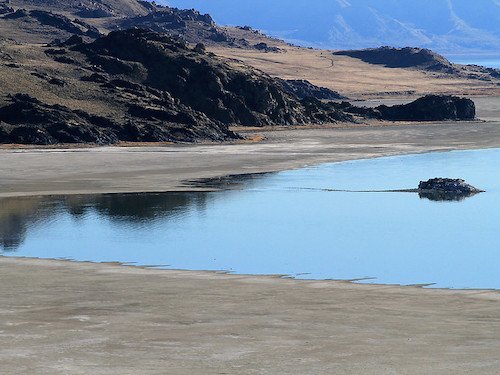 As a devastating drought threatens to dry up Utah’s Great Salt Lake, scientists warn of environmental apocalypses to ensue: millions of migratory birds will go hungry after losing their feeding grounds, and nearby residents will be exposed to dust clouds filled with arsenic.

“The lake’s flies and brine shrimp would die off—scientists warn it could start as soon as this summer—threatening the 10 million migratory birds that stop at the lake annually to feed on the tiny creatures,” reports the New York Times, noting that the lake has already shrunk by two-thirds.

Bonnie Baxter, biology professor at Westminster College in Salt Lake City, told the Times that shrinking water levels mean increased salt concentration, a chemical shift that bodes ill for the algae populations that the brine shrimp feed on. Describing the lake as being “at the precipice” of ecosystem collapse, Baxter said the situation is “terrifying.”

A more visceral threat for the 2.5 million people who live in Salt Lake City and its ever-expanding—and thirsty—suburbs, are the arsenic-laden dust clouds that would intermittently rise off the dry lakebed, poisoning the air and the remaining water. Other heavy metals, like antimony and zirconium, are also present in the lakebed.

The consequences for the lake and its surroundings are “absolutely, insanely bad,” said Kevin Perry, a professor of atmospheric sciences at the University of Utah.

While a solution exists—allowing more snowmelt water to flow through the Bear, Jordan, and Weber river systems into the lake—that “would threaten the region’s breakneck population growth and high-value agriculture,” something that many of Utah’s “state leaders seem reluctant to do,” writes the Times.

But something needs to be done, and quickly, as metropolitan Salt Lake City “has barely enough water to support its current population,” and “is expected to grow almost 50% by 2060.”

Laura Briefer, director of the city’s public utilities department, told the Times that “without diverting more water from the Great Salt Lake, the city’s supply of water will fall below demand by 2040.”

While city officials are pushing residents to conserve through efforts like restricting water permits, the push doesn’t include higher prices at the tap.

With one of the lowest per-gallon water rates of major American cities, Salt Lake also uses more water for domestic use than any of its sister desert cities: 360 litres per person per day last year, as opposed to 295 and 290 litres in Tucson and Los Angeles, respectively.

Mayor Erin Mendenhall, whose election platform promised action on climate change and air quality, declined to be interviewed by the Times. In a statement, she said the city will be reviewing its pricing regime “to send a stronger conservation signal.”

Republican lawmaker Timothy D. Hawkes, who wants more aggressive action to protect the Great Salt Lake, told the Times it risks the same fate as California’s Owens Lake, which dried up decades ago, producing the worst levels of dust pollution the U.S. had ever seen.

“It’s not just fear-mongering,” he said of the lake vanishing. “It can actually happen.”

And a shrinking lake means less snow, writes the Times. As storms pass over the Great Salt Lake, they absorb some of its moisture, which then falls as snow in the mountains. “A vanishing lake endangers that pattern.”