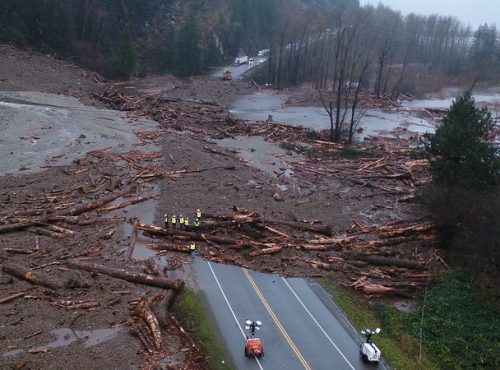 British Columbians should expect their governments to hold fossil fuel companies accountable rather than passing the costs of climate change on to citizens, said Andrew Gage, Staff Lawyer at West Coast Environmental Law, in a feature interview just days before WCEL’s unveiling of the new Sue Big Oil campaign this Wednesday.

“We really hope folks will join us for our launch on the 15th,” he told The Energy Mix late last week. “We’ve got an exciting path forward that anyone who’s concerned about climate change is going to want to support, and we can really build a movement that is going to sue big oil.”

The Energy Mix: What’s the basis for the Sue Big Oil campaign?

Andrew Gage: A number of lawsuits have been filed around the world, most of them in the U.S. but also in the Netherlands and Germany, that mostly centre around the idea that companies bear some responsibility for their products. If you’re selling a product that you know will cause significant impacts to the climate and to communities, you bear at least a proportionate share of the responsibility for that. We’ve seen lots of examples like asbestos and pharmaceuticals where companies have been sued because they knew a product would cause harm and they either undermined the science or they lied about it, and they continued to sell the product without taking responsibility for it.

The history of Big Oil and the fossil fuel industry tracks that very well. The industry has known that its products would cause these impacts for decades. Arguably as early as the 1950s and 60s, but certainly by the 1980s, they had a pretty good idea of what the impacts of their products would be on communities around the world. They could have looked at alternatives and chose not to because they were too expensive or would undermine their business. And they often funded or directed misinformation campaigns to undermine public support, as well as aggressively lobbying national and international bodies to undermine progress on climate change.

So what we’re proposing isn’t that novel. There are unanswered legal questions, but there’s a basis in Canadian law for bringing these types of arguments. In fact, in 2019, 28 law professors from across Canada wrote a letter to local governments saying they thought there was a legal basis. So there’s a fair bit of support in the legal community that there are questions that should be litigated before the courts.

The Mix: How many local governments are involved?

Gage: Local governments have previously sent climate accountability letters raising these questions. They didn’t indicate an intention to sue, but they raised the fact that they’re paying climate costs and it’s unfair that they pay the full cost.

The Mix: How does attribution science help you make your case?

Gage: It’s climate science more generally. One of the key pieces of work showed that the top five companies are responsible for around 14% of GHG emissions. So that provides a basis for talking about the fair share of each of these companies and what they should be responsible for paying. There’s also their history of involvement with deception and the proportion of the cost that belongs to end users versus the products. But it’s a starting point for talking about their liability.

Then there’s attribution science, which ties climate impacts, particularly weather events, to climate change. So it really depends on what you’re suing for. If it’s damages, it’s very helpful that scientists say a particular event is 150 times more likely at 2°C warming. If on the other hand a local government wants to sue for the costs of climate change, for a one-in-100-year flood event now happening every 20 years, that’s not precisely attribution science. It’s a much better established science related to estimating the change in probabilities. They’re related, but it’s much easier to see how to argue this case based on more conventional science.

The Mix: What’s the endgame? Is this campaign literally about getting fossil companies to pay, or about undermining their social licence and building community momentum to phase out fossil fuels?

Gage: We live in a world where the fossil fuel industry is hugely profitable because they’re not paying their fair share of the costs. They are causing billions of dollars of impacts to communities around the world—the Insurance Bureau of Canada says local governments should be spending C$5.3 billion per year just to adapt to climate change. And that’s going to rise in the direction we’re going. Those are huge sums of money, and when you factor that into the business models of the oil and gas industry, the companies that appear to be profitable are actually climate debtors.

So both end goals are in play. We want communities to be able to prepare, and they need the resources to do it. But at the same time, the appearance of profitability of this industry undermines just about everything else we want to do on climate change. You have the government of Canada saying our climate plan is going to rely heavily on an unproven technology, carbon capture and storage, that is designed to allow the industry to continue producing and go on at an ever-increasing scale. That only makes sense if you think this is a profitable industry that has a net benefit to society. So until we actually challenge this appearance, this sleight of hand, whereby our communities pay the cost and the industry profits, we’re going to have a lot of difficulty working to solve climate change in a way that makes sense.

The other point is that this is not particularly about regulating or getting compensation from Canadian companies. Something really interesting from a legal point of view is that you can sue global companies for their global emissions in B.C. courts where they cause local impacts. So this is not about targeting any one country’s emissions. It’s about holding global companies accountable for the harms in B.C., and that’s a gamechanger. It’s treating a global problem as a global problem and finding a way to hold them accountable.

The Mix: This runs directly counter to fossil executives’ baked-in assumption that they’re entitled to be heard and respected because they’re economic leaders. You’re calling them “climate debtors”.

Gage: You saw the same thing with the tobacco industry—they received massive subsidies in their home jurisdictions util they were sued. That’s how the subsidies dried up and they lost social licence. A big part of that was that it became clear they weren’t actually so lucrative when they had to pay the true cost of their industry. The fossil fuel industry appears to be a wealth creator, and as long as we let them get away with presenting themselves that way, governments will think it’s natural to subsidize them, that they should squeeze out every last drop.