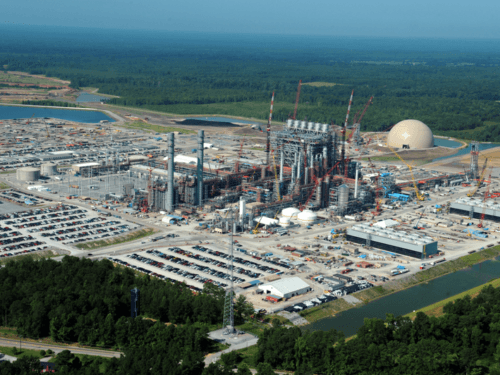 In 1980, a report circulated to a division of one of the biggest coal-burning utilities in the United States warned that “fossil fuel combustion” was rapidly warming the atmosphere and could cause a “massive extinction of plant and animal species” along with a “5 to 6-metre rise in sea level” across the world.

Several years later, an official at the utility co-chaired a conference where scientific researchers fretted that “as we continue to exploit the vast deposits of fossil fuels” it could cause “disruptive climate changes.”

Not only did Southern Company fail to adjust its business model towards cleaner energy sources, it began paying for print advertisements saying climate change was not real, Alberta-based investigative climate reporter Geoff Dembicki writes for the Guardian. “Who told you the earth was warming,” asks one ad from 1991.

Years after receiving multiple credible warnings about the atmospheric damage caused by its reliance on burning fossil fuels, Southern Company paid over US$62 million to organizations with a long record of spreading disinformation about climate change, a report released Wednesday by a fossil fuel watchdog called the Energy and Policy Institute has found.

Southern has now become the third-largest greenhouse gas polluter in the U.S. due to its fleet of coal-and gas-burning power plants, and until relatively recently was still denying the science behind global temperature rise. “Do you think it’s been proven that CO2 is the primary climate control knob?” CEO Tom Fanning was asked on CNBC in 2017. “No, certainly not,” he replied.

In response to a request for comment from the Guardian, spokesperson Schuyler Baehman said: “Southern Company is committed to reducing our GHG [greenhouse gas] emissions and providing the customers and communities we serve a clean energy future.”

“We always have engaged with regulators, stakeholders, and legislators in the interest of our customers and shareholders.”

Major oil and gas producers are now being sued in more than 20 U.S. jurisdictions for running campaigns to deceive the public about the climate crisis while internally acknowledging the risks of burning fossil fuels. And the new report suggests that coal-burning electric utilities like Southern Company, which were also warned about the climate crisis for decades, could be sued next.

The Georgia-based utility made its multi-million-dollar payments between 1993 and 2004, according to the Energy and Policy Institute’s analysis of corporate filings. It was a crucial period when aggressive U.S. action to combat the climate crisis could have potentially made the emergency less intense than it is now.

Watchdog researchers found that the electric utility paid more than $20 million alone to the Edison Electric Institute, a trade group that in 1991 helped create one of the first ever media campaigns designed to “directly attack the proponents of global warming,” according to internal documents.

Southern Company also worked directly with the U.S. Center for Energy and Economic Development—an industry group which received at least $200,000 from the utility—to spread pro-coal messages to the public. In 1994 and 1995, they collaborated on energy workshops that were broadcast across the U.S. with Southern’s satellite technology. Hundreds of middle school and high school teachers attended.

“After the program,” reads a digital newsletter summarizing the event, “one government official who attended one of the sites was heard to exclaim, ‘I didn’t hear anything that would make me vote to spend any money on this problem (of global climate change).’”

The newsletter reported that “sponsors are receiving numerous calls for the graphs and classroom activities used in the show.”

These denial efforts are all the more striking because in the early 1970s, several Southern affiliates joined with dozens of other U.S. utilities on a research effort whose goals included studying the “effects of CO2” on the climate.

Utility research groups funded in part by Southern Company released a 1988 study warning that “climate changes possible over the next 30 years may significantly affect the electric utility industry”.

Southern acknowledged in a 2016 statement to shareholders that it has “committed substantial financial and human resources” since the 1960s to the question of reducing carbon emissions.

The total of $62.1 million is likely just a small snapshot of Southern Company’s denial funding too, the report explains, because after 2005 Congress changed SEC filing requirements for utility holding companies “and the money trail largely faded.”

The money went to law firms, public relations companies, industry groups, and right wing think tanks that have at some point disputed the scientific consensus for climate change or attacked legislative solutions that could transition the U.S. economy away from its dependence on fossil fuels.

Exxon, by comparison, paid over $33 million to such groups over a period of 18 years.

Southern Company CEO Fanning has since changed tack on fossil fuels, somewhat. He said earlier this year said that “it’s very clear our future is embedded with renewables.” The company is planning to close over half its coal fleet by 2028, but will still remain heavily reliant on natural gas.

“Let’s say I’m a lawyer,” said Leonard Hyman, who formerly headed utility research at Merrill Lynch and is author of America’s Electric Utilities: Past, Present and Future. “I would sue from the standpoint of an investor, and I would say ‘you made certain [high-carbon] investments knowing full well that there was a very substantial risk from climate change.’”

This story is part of Climate Crimes, a special series by the Guardian and Covering Climate Now focused on investigating how the fossil fuel industry contributed to the climate crisis and lied to the public, in the United States and around the world.