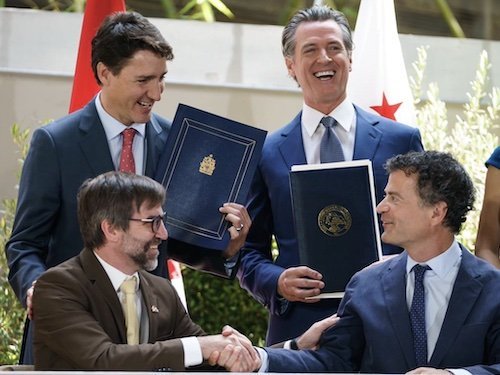 Canada and California are kindred progressive spirits on climate change, Gov. Gavin Newsom said Thursday, as he and Prime Minister Justin Trudeau unveiled a new blueprint for working together to stave off the worst consequences of a warming planet.

It also advances policy and regulatory steps to reduce greenhouse gas emissions and pollutants in both jurisdictions, as well as conservation measures and measures to deal with the worsening threat of wildfires.

And it will stand the test of time, Newsom said—regardless of who is in power in the California governor’s mansion, the White House or the Prime Minister’s Office.

California is a $3.3-trillion a year economy, he said, the fifth-largest in the world and a “stable partner” whose efforts to address climate issues and pollution standards have been influencing other states and countries—including Canada, he said—for decades.

“We punch above our weight,” Newsom said, describing California as a state whose regulatory reforms have stood the test of time and the political whims of the electorate.

Trudeau said Canada will always find favour with a partner that’s willing to press ahead and make progress on issues of shared significance.

“Canada has always been a country that engages in the world, and whether it’s engaging with like-minded countries or like-minded states like California, we’re just there to get things done,” Trudeau said.

“When we find alignment on so many things—as we always have with California, but as we specifically have under Gavin Newsom’s administration—we jump on it.”

Trudeau delivered an impassioned defence of his government’s efforts to rebrand Canada, a country economically dependent on its fossil fuel resources, as a champion of tackling climate change.

It’s precisely because of that reputation as an oil-producing nation that Canada has extra credibility on climate issues, Trudeau said.

“Moving forward on climate change is really hard for us. We have a thriving fossil fuel industry in our country at a time where the world continues to run on fossil fuels and will for a number more years,” he said. “The fact that we have that means it’s all the more important for us to step up and show real leadership on fighting climate change, and that’s exactly what we’ve done.”

The fellowship between Newsom and Trudeau, two progressive leaders in their early 50s who cut a similar silhouette, was evident from the moment they met on the front steps of the California Science Center, CP says.

The pair chatted amiably and laughed out loud at each other’s jokes as they sat down for a brief luncheon meeting before their joint news conference, where Newsom joked about Trudeau’s popularity with his staff, a lack of term limits in Canada, and how he himself is a “future ex-governor of California.”

The bonhomie and high spirits gave way to a more sombre meeting later Thursday between Trudeau and U.S. President Joe Biden in a cavernous meeting room at the Summit of the Americas in Los Angeles. Biden agreed during that meeting that he would finally pay an in-person visit to Canada in the coming months, his first since becoming president in the midst of the COVID-19 pandemic.

Trudeau was also scheduled to sit down Thursday with the president of Argentina, Alberto Fernandez, before sitting down with Sundar Pichai, the CEO of Alphabet Inc., Google’s parent company.

This report by The Canadian Press was first published June 9, 2022.