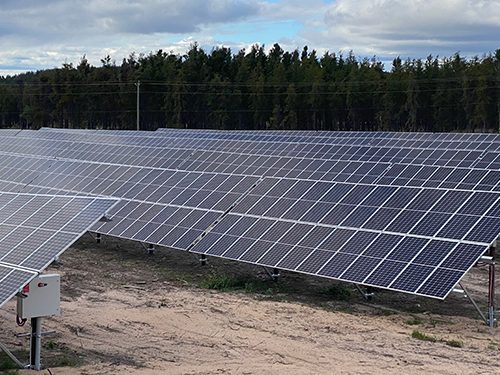 U.S. President Joe Biden has announced a two-year pause on a controversial tariff that was hobbling his country’s solar panel installation industry and imperiling his administration’s 2035 clean energy goal.

On Monday, Biden ordered the 24-month tariff exemption for solar modules manufactured in Cambodia, Malaysia, Thailand, and Vietnam. He also invoked the U.S. Defense Production Act “as a means to accelerate American manufacturing across the solar supply chain and alleviate overall dependency on imported PV hardware and materials,” PV Magazine reports. “The goal of invoking the act is to raise domestic solar manufacturing capacity to 22.5 gigawatts (GW) by 2024.”

“There is going to be this safe-harbor timeout on the… collection of duties, and that’s at the heart of what’s going to save all of these solar projects and ensure that they are going forward,” an unnamed source told Reuters in the lead-up to the announcement.

“Devil in the details, but it looks like the president is finally starting to listen,” added John Berger, CEO of solar installer Sunnova, in an interview with Canary Media.

The story, and the carnage in the U.S. solar industry, date back to March 28, when the U.S. Department of Commerce (DOC) launched a trade investigation at the request of California-based Auxin Solar, focused on Chinese companies operating in the four countries now subject to the exemption. The measure could have produced retroactive tariffs of up to 240%, the Washington Post reported. Now, while the DOC probe could still end in tariffs, there’s no further risk that they’ll be retroactive, PV Magazine says.

But the deep uncertainty has already had an impact.

“In the months that followed the announcement of the investigation, the Solar Energy Industries Association (SEIA) lowered its solar installation forecasts for 2022 and 2023 by 46%, predicting that the case would result in a drop of 24 GW of planned solar capacity over the next two years, more solar than the industry installed in all of 2021,” the industry magazine writes.

By late April, a “frozen” solar industry was reporting more than 300 projects cancelled or delayed, and Utility Dive said the market was “in a state of panic” over the tariff, as well as delays connecting completed projects to the power grid. NextEra Energy President and CEO John Ketchum took aim at an “outrageous” regulatory measure that had stalled up to 2.8 gigawatts of the company’s 2022 projects. Northern Indiana Public Service Co. delayed a coal plant retirement by two years because of the uncertainty. And Energy Secretary Jennifer Granholm told a U.S. Senate committee the investigation would risk “the complete smothering of the investment and the jobs and the [energy] independence” that solar provides if it went on too long.

“The U.S. has become such a policy risk and a financial risk that manufacturers are going to other countries” to pitch their products, SEIA CEO Abigail Ross Hopper told a Canary Media podcast in late May. “There are literally no panels to be had.”

This week, Canary Media noted that manufacturing only accounts for 14% of the employment in the U.S. solar industry, compared to 67% in installation and project development. But “the fast-expanding utility-scale solar industry in the U.S. is dependent on inexpensive imported solar panels. This decision by Biden will allow the supply chain to restart, but there’s still significant uncertainty in the sector, and project development companies with thin margins that depend on tax equity financing don’t tolerate uncertainty well.”

In a deep dive for Canary Media in early May, veteran renewable energy journalist Eric Wesoff looked into the company at the centre of the dispute, San José, California-based Auxin Solar. His investigation flagged concerns about the quality of the company’s products, the tiny output of its one manufacturing plant, and even the empty parking lot and quiet, graffiti-covered loading dock at the back of the building.

But supporters of Auxin’s petition to the DOC said domestic companies might be doing better if not for lower-priced competition from overseas.

“The companies targeted in our petition advertise that they can evade U.S. tariffs imposed on dumped and subsidized Chinese products,” in what amounts to “blatant circumvention of U.S. antidumping and countervailing duty laws,” Auxin CEO Mamun Rashid wrote in March. “When the playing field is fair, American companies win. It’s time to give U.S.-made solar a chance once again.”

But Wesoff pointed to Tempe, Arizona-based First Solar as a larger domestic manufacturer that is going head to head with the competition, opining that a successful petition to Commerce would not be enough to keep Auxin afloat. “It’s a tiny, lower-tier, non-automated manufacturer in an area with high labour costs, producing products of questionable quality,” he wrote. “That’s why it’s uncompetitive, not because of China’s industrial prowess, or even its unfair trade practices.”

A couple of weeks later, analysts at BloombergNEF said Auxin had misused their data to justify the petition. Auxin told Politico that was “preposterous”.

The tariff threat and its impact on the industry drew concern from both Democrats and Republicans when Commerce Secretary Gina Raimondo appeared before a Senate committee in mid-May. But legislators have still been weighing in on both sides of the dispute. While a bipartisan group of senators and 85 members of the House of Representatives urged Biden to expedite the case, six members of Congress—including Democratic senators Sherrod Brown (OH) and Bob Casey (PA) and Rep. Marcy Kaptur (OH)—pushed the White House to protect U.S. manufacturing and insinuated “a concerted political and lobbyist effort to undermine the investigation,” PV Magazine wrote in late May.