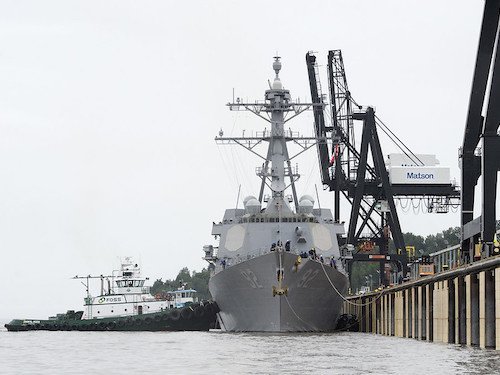 The entry point for 95% of the food sold in Alaska, the all-important Port of Alaska in Anchorage (the state’s only port) is seeking to build a microgrid supported by between 2.5 and 3.5 megawatts of solar with storage, as well as a backup generator owned by a local utility, reports Microgrid Knowledge.

Port authorities want to use the microgrid to level a demand load that currently swings from 1.5 to 7 MW, to a “steady 2.5 MW.”

In addition to powering the electric cranes that offload food and supplies from container ships, the port also powers a nearby military base. One of 18 Department of Defense seaports, Joint Base Elmendorf-Richardson also relies on the port to deliver the fuel it uses to patrol America’s northernmost border.

Homer Electric, one of five electricity cooperatives that make up Alaska’s “small and sketchy” grid, is already reaping the benefits of a microgrid, said David Thomas, the utility’s director of strategic services.

During a harrowing five months in 2019, when the utility was “islanded” from the main grid due to wildfires, Homer had to pay high prices to keep natural gas and hydro plants running to provide backup power.

The company ended up with US$1,000 per hour in additional fuel costs. Determined not to repeat that experience, it bought a Tesla Megapack which cost $41 million, provides 46.5 MW of capacity, and “saves the day” during outages—while helping the utility avoid the extra costs of natural gas, said Thomas. The battery pack is also helping the cooperatives integrate renewables.

Likewise determined to avoid power costs that currently run as high as US$1.80 per kilowatt hour, Alaska’s rural communities are shifting away from fossil-fuelled power systems. Of the 200+ independent microgrids spread across the state—most of them diesel-based—at least 20 have installed storage, and some have added renewable energy, including Shungnak, a 25-square-kilometre community of about 300 people in a region where temperatures can drop to -40° [in your choice of temperature scale— -40 is where Celsius and Fahrenheit converge—Ed.].

Now less reliant on diesel, thanks to a 225-kilowatt solar array and a 32-kWh battery system, Shungnak’s microgrid contains a “diesels off’ function that allows it to avoid using fossil fuel as much as possible.