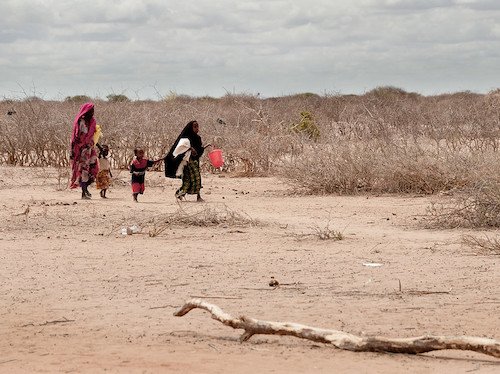 Two years into its worst drought in four decades, distress in the Horn of Africa is deepening, with more than 16 million people now at risk of profound water and food insecurity, and the women and children of the region’s pastoralist communities suffering most.

Drought and searing temperatures have decimated crops and sent herders off in search of water for their remaining goats and cows, leaving their wives and children to struggle on alone, writes Bloomberg. The news story tells the case of Mumina Mohammed, mother of nine, whose husband left on such a quest from their village in eastern Kenya, three months ago.

“It’s a very heavy responsibility to raise all these children alone. All of them need food and it’s very stressful,” Mohammed, 30, told Bloomberg.

“Whenever there is rain, I’ll expect my husband will come back,” she added.

With weather patterns in Kenya in such disarray—the country “typically gets most of its rainfall between March and June and some showers between October and December,” but has been parched since late 2020—there is no certainty as to when the rain will come.

While the Kenyan government insists it is doing all it can to help people like Mohammed and her children, recently waiving import duties on 540,000 tons of corn and raising the minimum wage 12%, Sharmake Mohamed, head of a group of Kenyan wildlife conservancies, said authorities are not doing enough to help the country’s pastoralists.

Mohamed warned that Kenya “is sitting on a time bomb,” urging greater investment in agriculture and in climate mitigation. “We need to look at the repercussions of the pastoralist community being ignored.”

The herders and their families account for about 20% of Kenya’s 55 million people and occupy more than 70% of its land, Bloomberg notes.

Adding to the potential for future harm—and a great deal of present-day despair—is the fact that many children have been forced to leave school, as their drought-ravaged families can no longer afford the fees.

In Nunow, Mumina Mohammed’s village, a grade 4/5 class that welcomed 33 pupils in August last year now has only eight. Teacher Maryan Ahmed told Bloomberg that “boys were prioritized for schooling and girls as young as nine were increasingly being married off for dowry payments, or to ease economic pressure on their desperate families.”