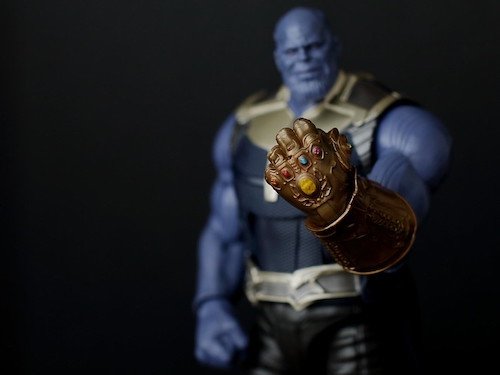 Responding to the creep of ecofascist rhetoric into mainstream discourse, as well as to the demonstrably vicious ecofascist “creeps” themselves, a group of American academics have created a webzine that uses Marvel comic characters to educate the public about the dangerous fallacies driving far-right thinking on environmental crises like climate change.

Anson and her team’s purpose with the Marvel-esque zine—Against the Ecofascist Creep—is to offer an antidote to the pervasive sense of nihilism that many ordinary people are feeling in the face of the combined realities of an accelerating climate crisis and a myopic public dialogue on climate response.

The reality is that, when overwhelmed with confusion and fear, people become more susceptible to simplistic (and sometimes vicious) answers to complex problems.

In a recent report on the rise of ecofascistic violence in America, Inside Climate News cites a 2019 comment by Fox News’ Tucker Carlson as Exhibit A. “Isn’t crowding your country the fastest way to despoil it, to pollute it, to make it a place you wouldn’t want to live?” Carlson mused to a guest from the Heartland Institute, a famous incubator for far-right climate denial.

This dog-whistle drive to blame immigrants, and especially people of colour, for environmental woes is textbook ecofascism, adds Inside Climate, citing the mass murder of 10 Black people in Buffalo last month, as well as the 2019 murders of 51 Muslims at prayer in a mosque in Christchurch, New Zealand, and of 23 people, mostly Latino/Latina, at a Walmart in El Paso.

In all three atrocities, the killers—each young, white, and male—explicitly invoked ecofascist doctrine to justify their actions.

The webzine and associated teaching resources produced by the Anti-Creep Climate Initiative is a direct response to the way ecofascism is creeping into pop culture, with Thanos, the “arch-supervillain of the Marvel Cinematic Universe (MCU),” representing the trend.

Appearing as the central villain in the wildly popular Avengers: Infinity War and Avengers: Endgame, Thanos gets his name from thanatos, a Greek word used to describe the “death drive”—a psychological concept popularized by Sigmund Freud, referring to self-destructive tendencies in humans.

In the Marvel story, Thanos murders half of all life in the universe, driven by the conviction that doing so will free up enough resources for everyone left alive to prosper. “Spoiler alert: it doesn’t,” writes Anson.

Far worse than Thanos’ own violent pathology, however, is Marvel’s decision to opt for a “good vs. evil” showdown, rather than “address Thanos’ misleading mythology in a nuanced way.”

“Thanos’ very real concerns about resource consumption were left unaddressed and, as a result, many viewers thought Thanos made some good points,” write Anson and her team.

Against the Ecofascist Creep is an effort to correct the record, with the likes of Dr. Strange and Iron Man attempting to re-educate against Thanos’ violent notion that “overpopulation is an environmental crisis”—a misconception that is one of the six primary myths underpinning ecofascist ideology, according to the creators of the Anti-Creep Climate Initiative.

“You should know better than to repeat such a long-debunked argument. There are enough resources to go around,” says Dr. Strange (aka Benedict Cumberbatch), in the comic. “It’s not an overpopulation problem. It’s a distribution problem.”

Against the Ecofascist Creep was inspired by a 2017 book by the same name, “which considers how fascist ideas ‘creep’ into power not only via the far right, but also through mainstream and leftist channels.”

Climate journalists Amy Westervelt and Mary Annaïse Heglar have a hot take on ecofascism as the place “where the far left and the far right kiss.”