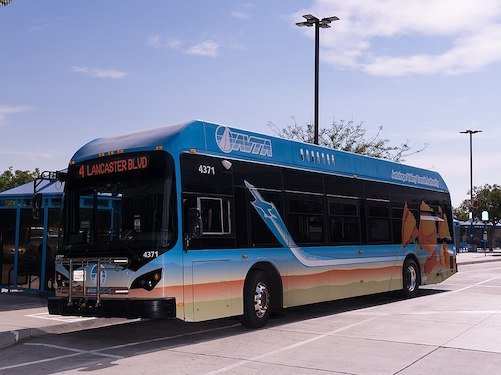 A transit agency in California is drastically reducing its greenhouse gas emissions, saving money, and creating hundreds of jobs after shifting its entire 87-bus fleet from diesel to electric, 18 years ahead of the state mandate that would have required the new vehicles.

“Imagine a depot packed with nearly 100 buses, but no engine noise, no fumes, no drops of diesel staining the concrete expanse,” Canary Media writes. “The notion that a bus hub could be, in a literal sense, spotless, was inconceivable until recently. But such a facility has sprung into existence in the far northern reaches of Los Angeles County, where the Antelope Valley Transit Authority has completed the nation’s first large-scale transit fleet electrification effort.”

At a late March ceremony at AVTA headquarters in the city of Lancaster, Liane Randolph, chair of the California Air Resources Board, called the fast turnaround on the conversion “an amazing achievement” that set “an example for other transit agencies.”

The milestone “really shows that you can build a zero-emissions fleet and meet the needs” of the agency, she told Canary Media. “Projects like this require a lot of coordination and work and leadership,” but “it’s absolutely 100% doable, and it will become routine over time.”

The news story traces the mix of engaged leadership, access to grants, and “willingness to bet on an electrified future” that made it all possible. That included a BYD bus manufacturing plant down the road that brought the city “600 mortgage-paying jobs,” said Lancaster Mayor R. Rex Parris, a Republican who’s been in office since 2008.

“Just a few short years ago, we were being laughed at, [told] that it was not possible,” Parris told Canary Media’s Julian Spector. “There were a thousand reasons not to do it.”

Now, with transit agencies across the U.S. reaching out to learn how AVTA got the job done, “we want to create a template for the world to follow,” he added. “We want to make it so easy that they can’t say no.”